Conflicts are difficult enough to solve when it’s just a small region of the world that’s involved, and when something global arises, there can be many obstacles to peace. Several times throughout our history, there have been wars that have spanned multiple continents and involved many countries of the world. There are clear issues that precipitated the outbreaks of those wars, but there are surely many conspiracy theories that exist about powerful operatives pulling the strings of the world’s leaders to determine a desired outcome. The King’s Man creates such a scenario where the only possible way to combat such a threat is a few clever spies.

At the beginning of the twentieth century, Orlando Oxford (Ralph Fiennes) is devastated by the death of his wife, leading to him keeping a close watch on his son Conrad (Harris Dickinson), committed to keeping him from harm’s way even though he wishes only to serve his country. When he learns of a shadow organization embedded deep within many governments set on keeping World War I going, Orlando must give up his vow of nonviolence and head straight into the lion’s den with his loyal colleagues, Polly (Gemma Arterton) and Shola (Djimon Hounsou), who put their skills to great use.

This is the third film in the Kingsman series, following Kingsman: The Secret Service and Kingsman: The Golden Circle. This is a prequel to those films that takes place long before those events, and having screened the first two likely isn’t necessary given that this is the first encounter with this franchise for this reviewer. What becomes clear early enough even with no knowledge of the general setup is that, while this isn’t meant as an explicit parody, it’s certainly not all that serious, and comedy is key to its tone. Making a mockery of the many tragedies of World War I doesn’t seem to be in great taste, and this film does stick close enough to real history as its inspiration, and merely fictionalizes the circumstances behind it that lead to Orlando and his team’s intervention.

Overall, it’s not so apparent what this film is trying to be. The film’s title makes reference to the fact that Orlando has a direct pipeline to King George (Tom Hollander), and also to the tailor shop that serves as a meeting space for Orlando and all of his associates. Knowing that it is a prequel suggests that the reveal will come towards the film’s end as the organization officially takes shape, and this is a much more ragtag group that flies under the radar and is still getting a sense of exactly how it works and what its identity truly is. Their talents are indeed remarkable, though their planning and execution of their ideas sometimes leaves a considerable amount to be desired.

The moments in which The King’s Man works best are when the action is in full swing and some villain is in the process of attempting to eliminate one of the heroes. It features a number of unnecessary diversions that take audiences to trenches that seem infinitely less convincing than what was recently featured in 1917 or into a mind-bogglingly strange and seemingly sexual scenario that adds nothing to the overall storyline. Two hours and eleven minutes isn’t an unreasonable runtime, but this film could have been much tighter and lost few of its crucial plot points.

The cast does appear to be having fun, and it’s great to see dependable performers like Arterton and Hounsou alongside Fiennes, who is a natural fit for a role in which he doesn’t need to take himself quite as seriously, try as he may. Rhys Ifans delivers a memorable if gratuitous turn as Rasputin, while Hollander gets to play not only King George but also his cousins Kaiser Wilhelm and Tsar Nicholas. This film feels silly more than anything else, which is a shame given that it might have benefited from more intention and focus to become something truly worth watching and enjoying. 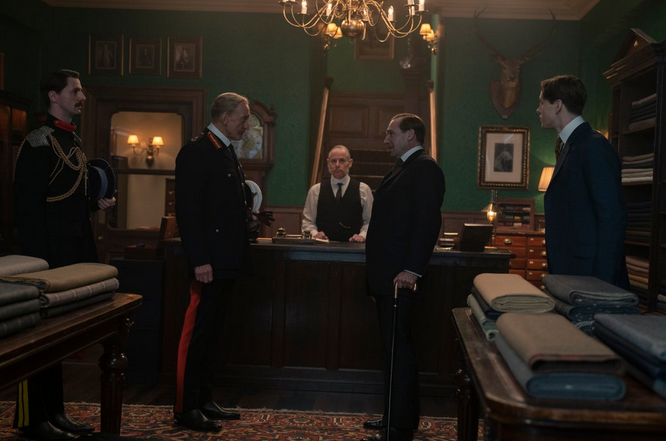