Life would be a lot easier if those who had feelings for each other could simply state them directly and immediately acknowledge their reciprocal existence. Yet that’s so rarely the case in the world and especially in cinema, where someone presumes that another must feel differently and then goes to extravagant lengths to either conceal or communicate their true desires, which can have devastating and sometimes deadly consequences. Cyrano de Bergerac is a character whose story has been told in many forms over the course of the more than a century since it was first performed as a play, and the newest version is a generally lighthearted musical that provides an enjoyable update to the classic tale.

Cyrano (Peter Dinklage) is an actor and a man of great intelligence. He knows how he much he loves Roxanne (Haley Bennett) but does not know how to tell her, and is stunned into silence when she reveals that she has fallen in love at first sight with a new soldier in his company, Christian (Kelvin Harrison Jr.). Though it pains him greatly, Cyrano begins writing poems of love to Roxanne for Christian to deliver, giving a man who knows nothing of her the ultimate tool to win her heart, even though he is the one with both the passion and the gift of words.

Cyrano is based on the 2018 musical play that also starred Dinklage and Bennett. It puts the energy of Cyrano’s cleverness into song, presenting the opportunity for a series of alternatively humorous and heartfelt musical performances. Roxanne is given the more melodic and memorable songs to sing, indicative of the way in which she is seen by both Cyrano and Christian, hypnotized by her beauty and the way she comports herself. She is also the subject of desire for the selfish and snobbish De Guiche (Ben Mendelsohn), who even gets a musical opportunity to exonerate himself and make a case for his right to have feelings of his own.

The casting of Dinklage in this role is a true advantage to the film, since the very physically small actor has more than proven his ability to assume any part he takes with the fullest commitment and presence. His Emmy-winning time on Game of Thrones should leave few doubters, and Dinklage brings with him here a similar wit that manifests itself in a different way, since he is not forced to contend with obnoxious siblings but instead has already won over all in his orbit save the one person whose opinion truly matters to him.

Opposite Dinklage, Bennett, who had a memorable role in Swallow, is exceptional, radiating warmth and sincerity from her very first moment on screen. She makes Roxanne three-dimensional and believable, truly unaware of Cyrano’s feelings for her but not in a way that makes her seem any less bright and competent than she is. Harrison continues a streak of strong film choices that span a range of genres, and Mendelsohn is clearly enjoying chewing scenery in a way he only sometimes gets to do.

Joe Wright, the British director known for period pieces like Atonement, Darkest Hour, and Anna Karenina, brings a competent eye to this story, grounding it in the past with the selection of colorful costumes and sets and not trying to drag it into a more modern era. Fans of previous iterations of Cyrano will likely be pleased with this musical adaptation, one that does not boast instantly memorable songs but does maintain an endearing rhythm that makes watching its predictable events an enjoyable and pleasant time worthy of all the talent involved. 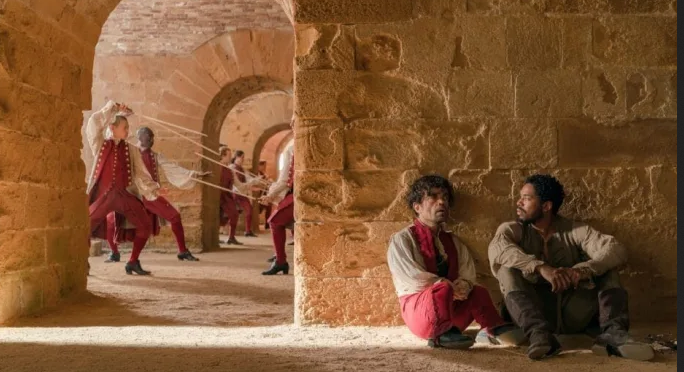