To call Morbius, the latest superhero movie spun off from Marvel Comics properties, actually compelling would be overstating it by half. But there’s enough loose-limbed energy and competent filmmaking, plus an anchoring performance from Jared Leto that scrupulously eschews some of the showier or more self-consciously performative instincts which he occasionally indulges, to probably qualify this movie as a worthwhile investment of time for many of those who would be predisposed to care about its existence. Whether it checks all the boxes of full and complete fan-culture satiation is of course only for the terrible, terrible internet to decide, but there’s enough meat on the bone here to acquit this project, and its players. 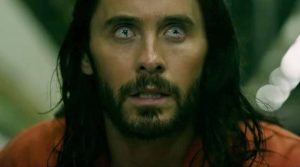 The story centers on Dr. Michael Morbius (Jared Leto), a scientist who has devoted his entire life to studying blood-born illnesses since having been afflicted with one at birth which requires thrice-daily transfusions. A brief passage shows Michael as a child, bonding with fellow orphan Lucien, who he nicknames Milo; the latter grows up to be his rich benefactor (Matt Smith). For years this work has yielded prestige but little in the way of concrete breakthrough (we get to see Morbius turn down a Nobel Prize).

One day, however, things change. When an attempted medical self-cure (the leaping-off point for many a horror film) held in international waters goes sideways, it leaves Morbius both imbued with pseudo-vampiric superhuman abilities (echolocation! flight!) as well as a crippling need for blood every four to six hours. It also leaves him riddled with guilt over a bunch of dead bodies on the ship. Milo, promised by his friend that research could perhaps reverse their conditions, snatches some of the test serum for himself and suffers no such remorse, setting up a surrogate-sibling showdown over the moral implications of living off of human versus synthetic blood, in addition to, you know, murdering people as a pressure release valve for years of pent-up hostility over being bullied. Caught up in this bloody, fanged swirl is Dr. Martine Bancroft (Adria Arjona), Morbius’ associate, who assists her research partner and comes to be rightly recognized by Milo as an instrument of human leverage in his battle with his fallen-out-of-favor friend.

Movies like Morbius these days typically have much more on their minds than just telling one story well (even if it’s of an origin variety), and director Daniel Espinosa’s film is certainly no exception. The character originated in the early 1970s as an antagonist of Spider-Man, as well as an adversary of vampire hunter Blade. Given the hold of distributor Sony Pictures on Spider-Man as a property, they’ve been understandably quite interested in setting up their own parallel-universe rogues gallery of villains and antiheroes from affiliated comic books, to eventually provide a robust and lasting home base separate from the brawnier, bigger-budgeted Marvel Cinematic Universe.

Compared to the execrable Venom movies (to which this effort nominally plugs in), Morbius is most definitely a step up, though in a perverse way it’s perhaps not likely to get credit as such. Those films, especially Let There Be Carnage, use their fusillade of “humor” to defend or defuse from critiques over narratives that are essentially colorful dead car batteries (plus awful special effects). Morbius has no such escape hatch. It isn’t grim and gritty, but neither does it lean into any lighthearted and winky asides. (Tyrese Gibson and Al Madrigal show up as police officers investigating mysterious goings-on, and the latter provides a soupçon of levity.) Unfolding in a slightly more recognizably level world, where a couple normal human characters do normal human things as decidedly non-normal things happen around them, makes Morbius seem almost radical at times.

It’s a shame, then, that the screenplay, by Matt Sazama and Burk Sharpless, is a purely surface-level type of thing, setting up story beats and pulling narrative levers with an automaton effectiveness that is also bit joyless, or at least free of any set pieces that will linger in an audience’s mind too long after viewing. There are intriguing possibilities for enriching subtext, both in the friendship between Morbius and Milo and in the manner in which the movie describes the pair’s reactions to red, human blood as primal, and the synthetic substitute as… less satisfying. But the movie seems to go out of its way to stamp out any truly complex same-sex feelings, delivering instead a nonsensically staged sulky, bitter stare in the rain during a kiss between Morbius and another character — a hacky scene that’s been worked to the point of death.

Swedish-born Espinosa (Easy Money, Safe House, Life) is a filmmaker for whom facile genre mimicry comes easy — perhaps a little too easy. Those channeling gifts are put to more or less effective use here. The visual storytelling is enough to hold one’s interest, scene to scene, even if the action sequences themselves unfold as hyperkinetic flashes of color, summoning forth signature memories of Fantastic Beasts and Where to Find Them.

Coming off of his divisively hammy performance in House of Gucci, Leto delivers a very grounded and intense performance here; he invests in his character’s pain, at first physical and then emotional. He kicks to the curb any “method”-style affectations, instead leaning into the inner conflict in a manner that registers as simple and genuine. That’s the right decision for this character, and it gives Morbius a sturdy peg on which to hang itself (and, presumably, some sequels) should enough comic book fans turn out. The movie’s credit sequence tags, both occurring early enough to make sure audiences haven’t actually left yet, are duds as delivered, but do feature a character and narrative pathway which points a way forward for Morbius — and other Spider-Man villains.