All-4-One to Rock Out at SunWest Park’s SuryaFest Music, Health and Wellness Festival 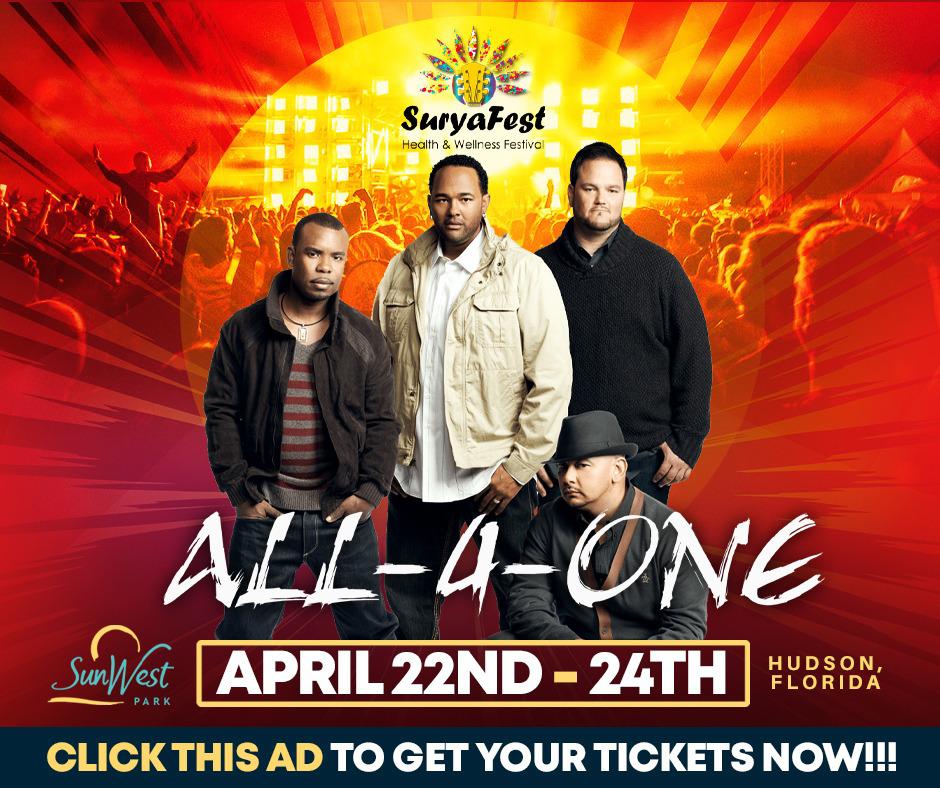 Acclaimed R&B-pop group, All-4-One is embarking on an anticipated tour later this month with successful rock band Starship featuring lead vocalist, Mickey Thomas. The two groups are set to perform over the weekend of April 22-24 at SunWest Park in Hudson, Florida.

The bands’ shows will be featured as part of SuryaFest, a Pasco County-based music, health and wellness festival. The festival’s Music Village will feature main stage concert performances from headline classic 1980s and ’90s rock and pop artists, including All-4-One and Starship Featuring Mickey Thomas Additional Main Stage programming will also include a Live DJ, contests, giveaways and fitness demos.

Fans of All-4-One and Starship Featuring Mickey Thomas can purchase a Weekend Pass for SuryaFest for $35, which is valid for admission for all three days. The groups’ fans can also buy one-day tickets for any individual day for $25. Tickets can be purchased on SuryaFest’s page on Eventbrite.

All-4-One is best known for its hit singles, ‘I Swear’ and ‘So Much in Love,’ which were both released in 1994. The band gained further praise when it unveiled the song ‘I Can Love You Like That’ the following year.

The group won the Grammy Award for Best Pop Performance by a Duo or Group with Vocal for ‘I Swear’ in 1995, and was nominated in the same category the following year for ‘I Can Love You Like That.’ The band also won the American Music Award for Favorite New Artist – Soul/Rhythm and Blues for ‘So Much in Love’ in 1995.

All-4-One has released seven records during its 28-year run, which have sold over 20 million units worldwide. The group has also completed multiple major world tours.

Starship Featuring Mickey Thomas is best known for its 1985 album, ‘Knee Deep in the Hoopla,’ which was certified platinum by the RIAA. The record includes two singles that went to number one on the Billboard Hot 100 chart, ‘We Built This City’ and ‘Sara.’

The band’s follow up album, ‘No Protection,’ which was released in 1987, was certified gold. It features the group’s third number one single, ‘Nothing’s Gonna Stop Us Now.’