Nothing is more painful in life for parents than the death of their child. But actress Akasha Villalobos’ protagonist of Ally Larkin in the new horror movie, ‘Trip,’ finds a seemingly harmless way to continue communicating with her daughter after her tragic, untimely death – until their connection begins to leave haunting effects on the rest of the mother’s life.

The drama is now available on the Terror Films Channel, and will be released digitally worldwide tomorrow, May 20. In honor of ‘Trip’s release, ShockYa is premiering an exclusive clip from the feature, which is titled ‘The Boy.’ In the clip, Ally finds comfort in watching a video of her daughter when she was a child. After the video is over, Ally continues thinking about her daughter by longingly look a picture of their family in happier times.

Set after the suicide of Ally’s daughter, ‘Trip’ follows the grief-stricken mother as she’s visited by an unconventional therapist. The doctor offers the mother a hallucinogenic drug that allows communion with the dead. Desperate to understand her daughter’s psyche, she accepts the offer, but soon finds herself terrorized by her daughter’s identical experiences.

While discussing ‘Trip,’ McCay stated: “When I saw ‘Gremlins’ at 6 years old, I became obsessed with monsters. Then I became obsessed with storytelling and filmmaking, so monsters naturally came along for the ride. But I had never imagined a monster being intangible, like an emotion. And that’s where the idea for ‘Trip’ was born. Could something like depression become a villain in a movie?

“What attracted me to making ‘Trip’ was that it wasn’t just about making scary things happen. The core story was about grief and depression, and the struggle to maintain relationships and keep hope alive. As someone who has struggled with this myself, I found the storytelling therapeutic,” the filmmaker continued.

“Although the movie centers around a reclusive alcoholic who isolates herself in her house, and there is a character who appears wearing a face covering, I promise you this all was written and filmed in 2019, long before we had heard of COVID-19. It’s just a coincidence! But I’m glad it could be a talking point. Now, more than ever, we need to lean on each other to discuss and deal with the subjects of isolation and depression,” McCay added. 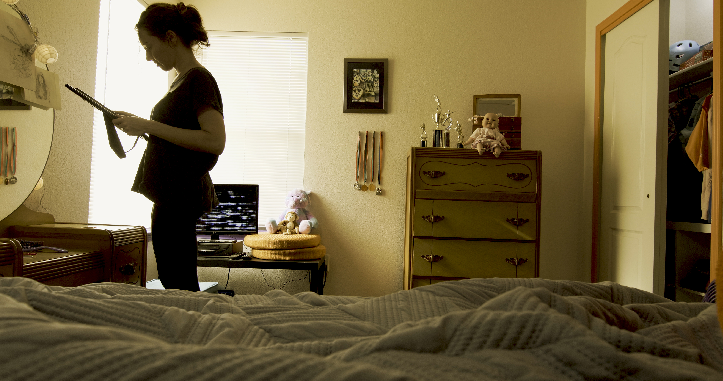 ShockYa is premiering an exclusive clip from Terror Film's horror movie, 'Trip,' which stars actress Akasha Villalobos, and was written, directed and produced by Neil McCay.