The inclination to believe in extraterrestrial life makes a good degree of sense even if there isn’t conclusive evidence that it does in fact exist. The universe is vast, and there’s only so much that we can understand and see with a microscope, a telescope, or a satellite. Presuming that there is something out there which might be intelligent and evolved to a different level can be exciting or terrifying, since science fiction has for years taught us that not all aliens come in peace. Acidman follows a protagonist who believes simply because he sees, and his reaction is not to question but to try to respond.

Maggie (Dianna Agron) shows up at the home of her estranged father, Lloyd (Thomas Haden Church), whose rundown home has been painted over with graffiti reading “Acidman.” She discovers that he hasn’t been taking great care of himself, and he spends his nights going out with his dog Migo to watch for and flash Morse code signals at distant lights that he believes are alien ships communicating with him. While Maggie worries about his mental state and his ability to take care of himself, she also repeatedly ignores calls from her husband Ben, using this opportunity to check up on her father as a way of avoiding her own issues.

This film is largely a two-hander, with Sameerah Luqmaan-Harris joining the two leads for a few scenes as Lloyd’s favorite waitress, who shows Maggie kindness and looks after the eccentric Lloyd as his primary point of human contact. But the weight falls largely on the very capable shoulders of Agron and Church to carry all of the scenes. In many cases, they are simply driving in a car or sitting next to each other, and there are years of a complicated relationship that are indicated by the way in which they interact and don’t interact.

Agron, who recently starred in Mayim Bialik’s As They Made Us, is most well-known for her role in Glee, and it’s remarkable to see how different this performance is from the one that served as her breakthrough. Agron is subdued and purposeful in her portrayal of Maggie, someone who shows up asking questions about her father that reveal a desire not to talk about herself, yet she is able to convey the lingering effects of her father’s unconventional parenting and the way in which he has made an indelible mark on how she moves through the world.

Church has a tendency to play curmudgeonly roles, typically fueled by sarcasm and uninterested in spending time with other people. He takes that to an entirely new level here, almost not acknowledging anyone else and feeling as if the moments that is with his dog and communicating with his alien friends substitutes for human contact. Lloyd is also prone to zoning out, something that worries Maggie greatly yet is indicative of Lloyd’s inability to see himself and see how he isn’t properly interacting with society since he’s become so used to going through it on his own.

This is a warm familiarity to Acidman that recalls writer-director Alex Lehmann’s previous film, the underrated Paddleton starring Mark Duplass and Ray Romano. Lehmann is clearly skilled at finding people at critical moments in their lives that they don’t fully realize have emerged and honing in on their humanity. This film is a simple exploration of a father and daughter and the unusual relationship that they have, one that is surely unique in some specific ways but otherwise much more broadly relatable for anyone who has been through a lifetime of interactions and memories. 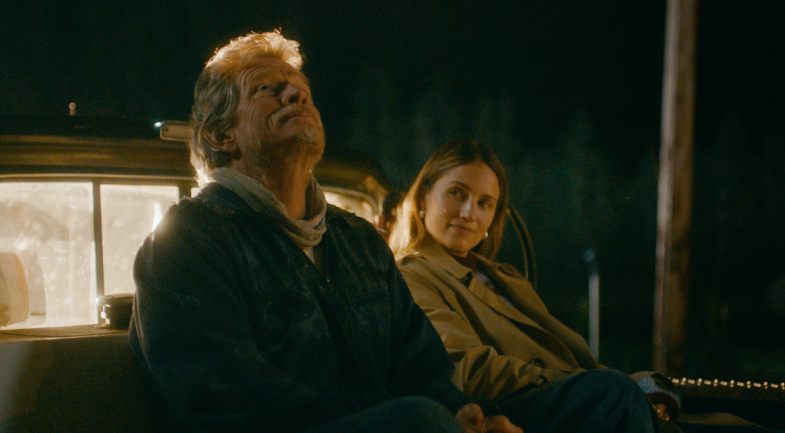