Sometimes the most satisfying journeys are the ones that require relentless grit, determination and drive. That’s certainly the case for Northern California native and acclaimed comedian, Jo Koy. The performer’s now sharing his talent of showcasing both the affection and laughter of his family and their Filipino-American community on screen, after his 30-year stand-up career, in the new comedy film, ‘Easter Sunday.’

The movie was written by Ken Cheng And Kate Angelo, and directed by acclaimed sitcom helmer, Jay Chandrasekhar (‘The Goldbergs,’ ‘New Girl’), who also plays a supporting role in the feature. Universal Pictures is releasing the film in theaters today, August 5.

While visiting his family, Jo must figure out how to balance the conflicts that arise between his relatives with his determination to secure a supporting acting role on an anticipated network sitcom. His agent, Nick (Chandrasekhar), urges him to immediately fly back to L.A. for a call-back audition with the network executives after his family’s Easter dinner. As a result, the aspiring actor contemplating what means the most to him in life – reconnecting with his family, or having the chance to finally secure his dream job.

Chandrasekhar generously took the time earlier this week to talk about directing and starring in ‘Easter Sunday’ during an exclusive interview over the phone. Among other things, the filmmaker discussed that he decided to helm the movie because as a comedian himself, he was interested in working with Koy on a comedy feature. The director also mentioned that he enjoyed working with the film’s entire ensemble cast, as he enjoyed seeing what jokes they could improv while they were shooting the comedy.

The conversation began with Chandrasekhar discussing why he was interested in helming ‘Easter Sunday,’ and once he signed onto the project, how he approached directing the feature during the production. “Well, I got a call during the pandemic, asking if I was a Jo Koy fan. I’m a stand-up comic, as well as a filmmaker, so I’m a big Jo Koy fan. So I said yes, and they asked if I wanted to make his first film,” he shared.

Chandrasekhar added with a laugh, “So I said yes, and read the script. I thought, I get it; he wanted to make a film that was sort of like ‘Friday,’ which takes place over one-two days.

“So I said to Jo, ‘Yes, we’re going to make a movie that has a Filipino-American cast in it, but we have to make a funny movie first that works as a comedy. You’re a comedian and I’m a comedian, so we have to make sure people are entertained. Then if we’re good and the movie makes money, then I think the representation part will take care of itself,” the filmmaker added.

Chandrasekhar then delved into what the casting process was like for the movie’s supporting cast, particularly the performers who would play Joe’s family members. “Well, Jo knew Tia Carrere, and he told me she was a really funny performer. I said, ‘I don’t know, she always seems to play the hot lady parts.’ So he said, ‘You have to meet her,'” the director shared.

“So I auditioned her, and she was so funny. I realized that she’s just never gotten the chance to play a comedic role; she’s like a comedian in a leading lady’s body; she’s a really funny person. So we gave her a bunch of jokes in this movie, and she’s just fantastic,” Chandrasekhar added.

“For the role of Joe’s mother, it was important to find someone who was both loveable and funny. Lydia Gaston was the one who really fit that role,” the helmer also divulged.

“Lou Diamond Phillips was also excited to be in the film because he got to play a Filipino; he usually plays a Native American or a Mexican. So he was just thrilled to play a Filipino in this movie,” Chandrasekhar continued about the actor, who was born in the Philippines and whose mother is Filipina, and also has Cherokee ancestry from his father’s family. “He was also thrilled just to tell jokes.

“It occurred to me that there are a lot of funny actors who’ve never really gotten the chance to show how really funny they really are. Since they’re stars of this movie, we have all sorts of jokes for them,” the filmmaker added.

Chandrasekhar then delved into what his working relationships were like with the actors once they signed on to star in ‘Easter Sunday.’ “I make ensemble movies, so I’m comfortable working with big, sprawling casts. This one is no different; it has a lot of characters.

“It was fun. I told everyone, ‘We’re going to write you great jokes, and you’re going to say those jokes. What you should also do is prepare your own jokes for takes four, five and six,” the director also divulged.

“They’re all funny comics, so they were all like, ‘What about this and that?’ I said, ‘Let’s just do it.’ So we got a lot of funny material out of all these funny actors,” Chandrasekhar added.

Further speaking of the fact that the cast members are such strong comedians, the filmmaker added that he enjoyed watching them bring their own material to the production while they were filming, and he included some of that material in the final version of the feature. “Jo Koy and Eugene Cordero have a little routine that they improvised; it’s more of a grunt and language more than anything.

“They do it at the end with Lou Diamond Phillips; he asks, ‘Is it like this?’ They go, ‘No, it’s like this.’ It’s this little routine that they did a few times throughout the movie,” Chandrasekhar added.

“Asif Ali, who played the bad guy, also improvised a lot of funny stuff,” the helmer added. “If you put funny people into a well-written character, they can usually can come up with some funny stuff.”

Besides directing ‘Easter Sunday,’ Chandrasekhar also played the supporting character of Joe’s agent, Nick. The filmmaker then delved into what inspired him to also star in the feature, and how he balanced his helming and acting duties during the production.

“Well, it was fun to get to play (Joe’s) agent. I had a lot of phone calls and conversations with Jo,” Chandrasekhar shared. “I’ve been in this business a fair amount of time now, and have dealt with a lot of agents.

“Luckily, my friend Kate Angelo, who co-wrote this movie, came up with the funny joke of playing an agent who constantly wants to get off the phone with his client. She claims her agent is like that. So I was really grateful that she wrote that great joke, and I get to be a really insincere person in this movie,” the filmmaker added.

Besides the jokes, the film also thrives in part on serious themes, including that it’s important to rely on family in difficult times of adversity. Chandrasekhar then delved into why he thinks that message is so important to include in a comedy like this one.

“Once we got the script organized, funny and working, we did a draft that allowed us to ask Jo Koy, ‘What do you want in here that’s not already in it? What are the cultural elements that you think are funny that the audience will like?,'” the director shared.

“We went through it, and added things like the statue of the little baby Jesus. There’s also the box that they send to the Philippines that all the relatives put clothes, cosmetics and candy in. We added those kinds of things fairly late in the process, and then just wove them into the story we already had,” Chandrasekhar admitted.

Besides the strong mother-son dynamic Joe has with Susan, ‘Easter Sunday’ also thrives on the father-son relationship Joe has with Junior. The filmmaker then delved into why it was also so important to focus on the at-times strained connection between Joe and his son.

“So there are a lot of meta situations going on when he hired another actor (Wardell) to play his own son. But they had good chemistry and got along. Teenagers are rebellious, so we rode that wave,” the helmer added.

Besides how the dynamics in Joe’s family affects everyone differently, another important theme in the movie is the fact that they choose to leave the Philippines and move to California. Chandrasekhar then shared how shooting ‘Easter Sunday’ on location also helped the actors create the connections between their characters on screen.

“We shot in Daly City, California (where the story is set) and Vancouver. Daly City is the top West Coast place in America for Filipinos, so it was important to shoot some of the scenes there,” the filmmaker noted. “Vancouver is where we shot a lot of (the movie), as well. Luckily, being on the West Coast, it looks kind of similar to Daly City.

“You want audiences to disappear into the movie. You’re trying to make things feel as authentic as possible, so that they can enjoy the story and jokes,” Chandrasekhar concluded. 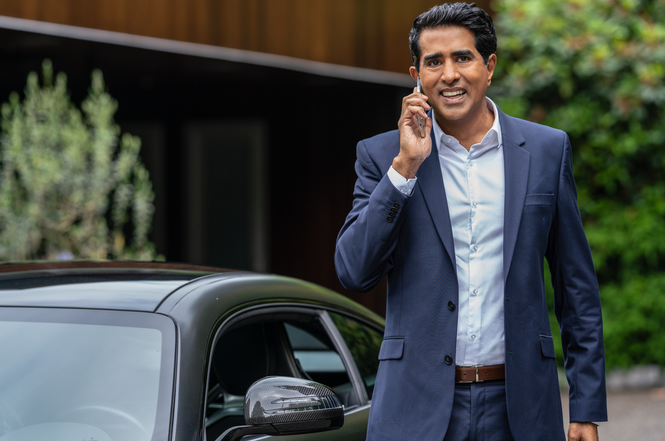