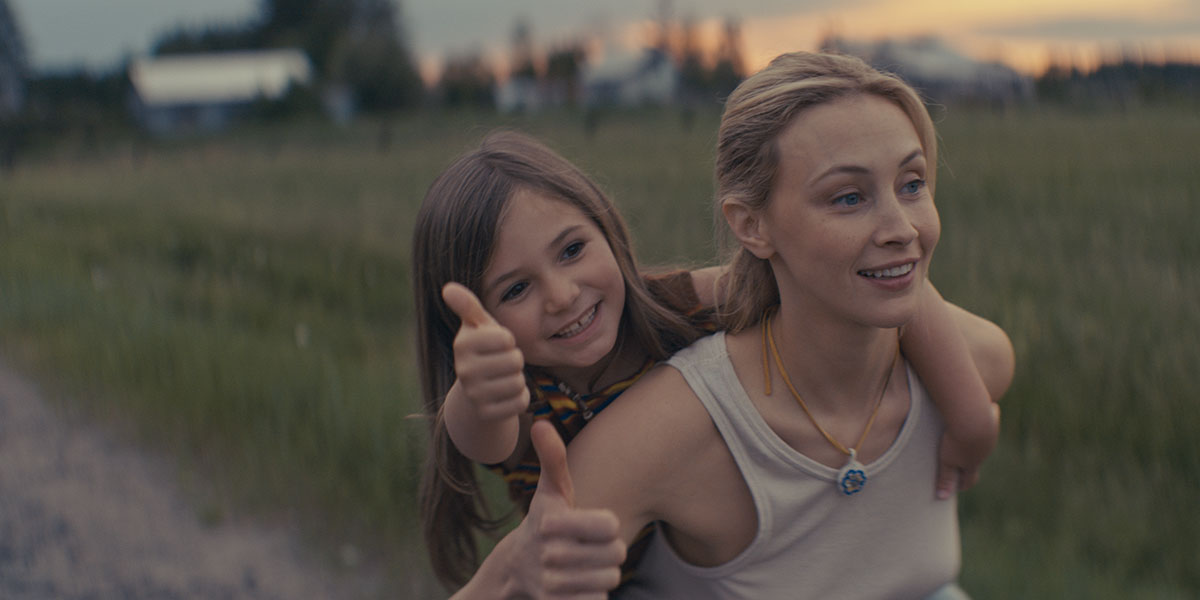 Society has ideas for how people should be brought up and educated, and much of history involves colonialists coming to a place they deem uncivilized and needing correction. But there are certainly flaws in the way that every government or institution operates, and there is something to be said for an unconventional approach, particularly one that gets back to basics, like truly communicating with and appreciating nature. North of Normal tells an involving story of living between two worlds and struggling to reconcile contradictory existences.

Cea (River Price-Maenpaa) leaves her home at a young age with her teenage mother Michelle (Sarah Gadon) and grandparents Dick (Robert Carlyle) and Jeanne (Janet Porter) for a traveling hippie lifestyle in the Canadian wilderness. As Cea (Amanda Fix) grows up, she enjoys the positive aspects of living off the land and not being tethered to any one place, but she also starts to experience a yearning for something more stable, particularly as she watches her mother constantly get herself into relationships that find her taken advantage of and ultimately abandoned.

This film is based on the memoir of the same name by Cea Sunrise Person. Much of it feels like a dream, with little to tether Cea to any consistent reality, making her woefully unprepared for immersion into civilization as a young adult. The way that she experiences the world is shown through her interactions with and perceptions of the authority figures in her life, who, in some cases, like her grandfather, exert dominance and rules, and in others, like her mother, seem unbothered by almost everything, to the point that her life has almost no set structure.

Films about the nomadic life are common and united by an eventuality that they are not tenable, whether that’s a decision made by the protagonists themselves or by someone else, like law enforcement, for them. Here, Cea isn’t part of a dangerous cult and is not being held against her will. But she also hasn’t had the chance to engage with the world in a way that allows her to question what is appropriate and accept what may not be. She has seen enough to know that there are inconsistencies in how her grandfather in particular advocates his vision and lives his life, and those make her consider how loyally she wants to hold to his worldview and rules.

Gadon is a strong actress who seems to gravitate towards exceptional roles, even if they’re not almost the most prominent. Previously seen in standout turns in projects like Black Bear, Corner Office, and 11/22/63, Gadon brings a detached, endearing quality to Michelle, someone at peace with her situation who believes she is doing what’s best for her daughter, even if Cea is strongly indicating to her that she disagrees, since she is still a parent, albeit an unconventional one. Carlyle is well-cast in his role, as are Price-Maenpaa and Fix, who embody Cea with a spirited energy and a maturity that speaks to the unique trajectory of her childhood.

Director Carly Stone, whose previous film, The New Romantic, also featured a fantastic female protagonist struggling to figure out who exactly she wanted to be, guides Cea’s journey with a light touch. Its title indicates an awareness of its atypical focus, but also a non-threatening and gentle approach to its story, which is full of bumps but never turns too severe. That it is adapted from a work written by its real-life subject suggests that, to a degree, things turn out just fine in the end, but the rocky road to get there is also filled with positive and affirming developments that highlight that there is no one way to be a parent or to be a child. Not every tactic works, but there is something to be learned from a spectrum of perspectives.