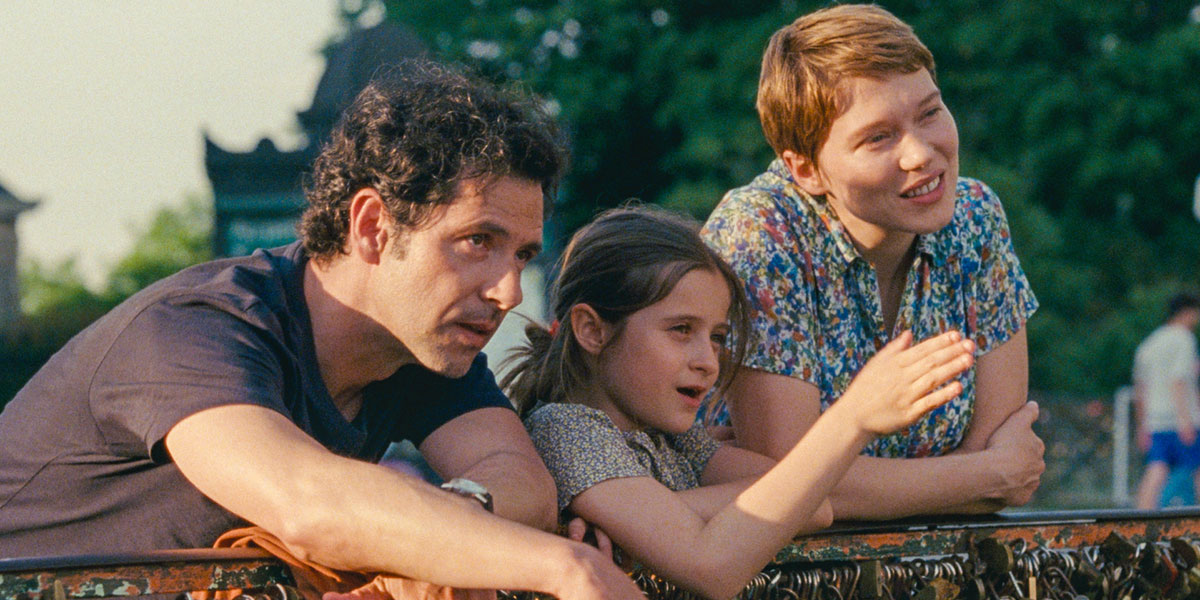 Life is a series of stages, and it’s often been remarked that parents raise their kids and take care of them, only to then require their adult children to care for them when they are no longer able to do so. Dealing with growing children and aging parents at the same time can be a true strain, and there doesn’t exist nearly as much support for overburdened caregivers as there should, especially when those people aren’t officially recognized in that capacity. Worrying about others doesn’t take away from regular responsibilities and expectations, and reliving the past in the present can be a burdensome ordeal which can ultimately prove too much to bear. Mia Hansen-Løve’s latest film, One Fine Morning, explores the intersection of family, relationships, and memory.

Sandra (Léa Seydoux) works as a translator, helping others to understand what non-French speakers are saying. She lives with her precocious eight-year-old daughter (Camille Leban Martins), and spends a good deal of time trying to help her father Georg (Pascal Greggory), whose degenerative disease has caused the former philosophy professor to go mostly blind and means he will soon need to live in a nursing home. As Sandra grapples with coming to terms with that development, she reconnects with her old friend Clément (Melvil Poupaud), whose marriage is failing and who seems all too willing to begin a romance with Sandra that can’t ever be truly fair to her.

This film smartly remains grounded in the present rather than relying on flashbacks to fill in the parts of Sandra’s childhood that are relevant to how she now approaches the situation with her father. Her mother, divorced multiple decades from her father, still attends to him regularly, accompanied by her new partner, and her father has his own girlfriend who seems well-liked by Sandra and the rest of the family, but whose own health issues prevent her from being able to take care of him. Sandra is not alone in this but does still feel that way, struck most by the fact that the man she sees in her father’s body is not the one she remembers. Rather than take joy from the brief reminders of the person he used to be, she finds herself overcome by sadness when something feels too similar to a time when he was actually a different person.

Sandra’s newfound relationship with Clément also wears on her since it represents something she has not felt for a long time. And Clément is in many ways a perfect choice, a loving father to a young son around her own daughter’s age who exhibits nothing but kindness towards her. But he can never be fully present, and as Sandra celebrates each new step of the relationship with understandable excitement, she begins to see him pull away as it all begins to become too real and he remembers that he has a wife at home to whom he’s still married. A happy ending seems impossible, and Sandra faces the possibility of losing multiple people in her life at the same time in different ways.

Seydoux shows a commitment to taking on a wide range of roles, following up her recent France and her multi-film stint opposite Daniel Craig’s James Bond with a very lived-in, emotional performance. Watching her break down as she sees flashes of her father listening to music conveys a deep sense of connection and heartbreak, and the same is true for how she reacts when Clément reminds her that she will never truly come first. As Sandra takes stock of what her father has lost, she comes to see what is most important for her to preserve. Like Hansen-Løve’s previous films, reflecting on the past has the power to affect the course of the future, a potent message embedded within an unextraordinary story whose ordinary nature is particularly resonant.