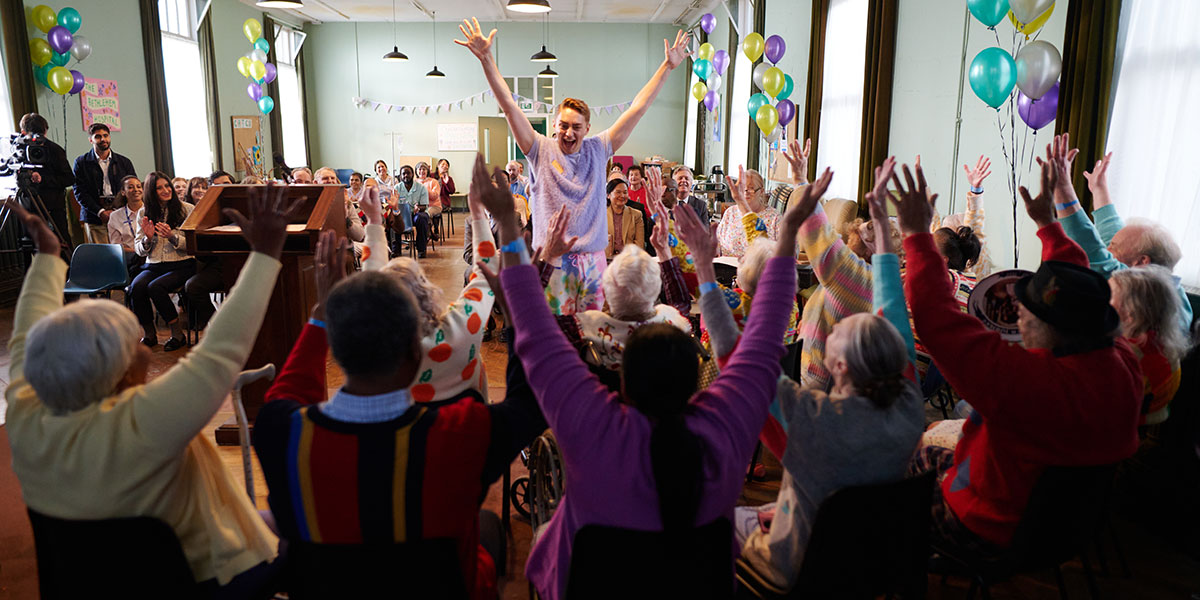 Few people set out to live out their last days in a hospital or a nursing home, yet, in many cases, that’s what ends up happening, since those facilities can provide the type of care that may be necessary with old age and sickness. There exists a wide range of quality in the places that do offer care, and it’s hard to find employees and volunteers who actually take the time to get to know and see the patients and residents. Allelujah looks at one of the good ones, a place that places an emphasis on humanity and compassion, something that isn’t always appreciated by the executives and funders who are more concerned with turning a profit than being a place that can truly help people.

Bethlehem Hospital in Yorkshire, called the Beth by those work there and who visit, is run by Sister Gilpin (Jennifer Saunders), who has a deep passion for what she does but can also be short and cutthroat in how she responds to those who challenge her, and Dr. Valentine (Bally Gill), who has chosen that name because he doubts anyone can pronounce his real ethnic-sounding surname and who exhibits only positivity with all of his patients. As Sister Gilpin prepares to receive an award, the staff faces the reality that they will soon likely close, turning to fundraising and to direct pressure on Colin (Russell Tovey), who works for the health minister and just happens to be visiting his father, Joe (David Bradley), at the Beth.

For most of this film, it feels like a standard look at caregiving and what people think geriatric wards are like, doing little to dispel those notions by infantilizing its residents to a degree. Their interactions are humorous and occasionally heartwarming, with literary intellectual Ambrose (Derek Jacobi) bonding with Dr. Valentine, who appreciates his language guidance so that he can pass the English test required to gain citizenship. Dr. Valentine also enlists Mary (Judi Dench), who is considerably more mobile and independent than the others, to record her own footage on an iPad to offer to the camera crew filming a documentary they all hope will help to save the hospital.

This all sounds like a lighthearted showcase of the way people age and gradually start to allow themselves to be taken care of, but it makes a questionable tonal pivot near its end that sends it in an altogether different direction. What comes before it and what comes after aren’t particularity compatible, creating a jarring experience that feels anything but smooth. Though it is adapted from the play of the same name by Alan Bennett, that isn’t its problem, and anyone unaware of its stage origins likely wouldn’t guess that it was first presented in that format. Its problems lie in the fact that it prepares audience expectations for one kind of film and then abruptly offers another without any warning.

There are worthwhile performances and moments to be found throughout this film, and its resolution, however stark and unearned, does present something to ponder about how people think of and treat healthcare workers. The staff includes a variety of personalities, which feel as if they could broadly define a number of types of people who work in these settings, and the same goes for patients who have in some cases not accepted their present situations. Anyone who has had a relative or friend in the care of nursing staff will surely find something to recognize in this film, even if its overarching themes aren’t quite as definitive or emphatic as was likely intended.