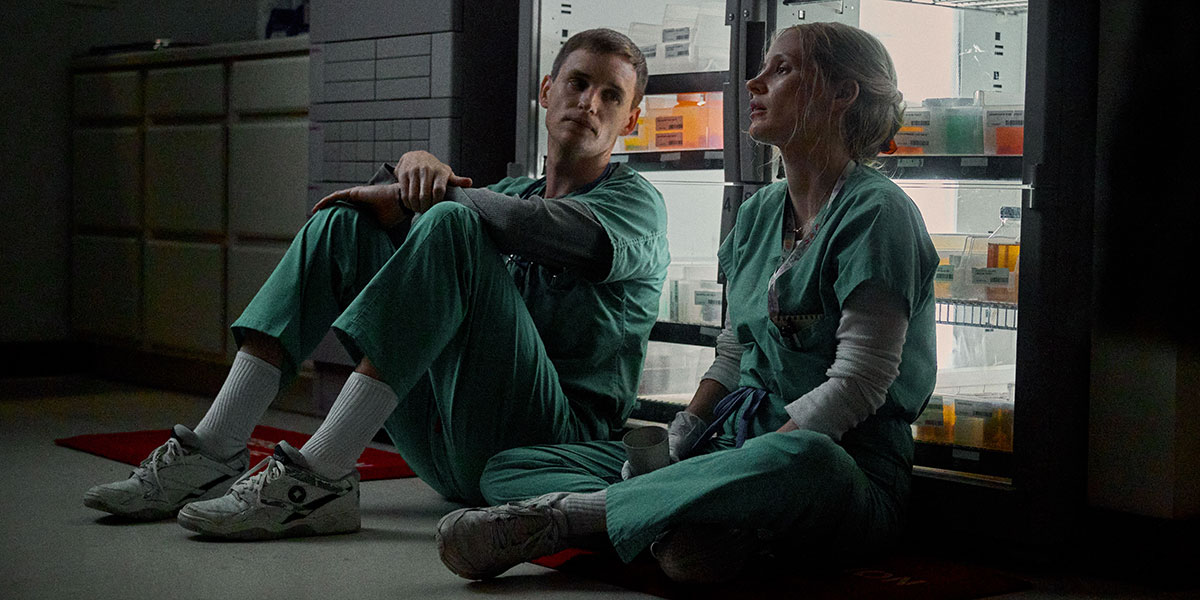 Going to the hospital for any reason can be a nightmare, without the added concern of malicious physicians and nurses. That’s only gotten truer during the COVID-19 pandemic, where many patients had to face being alone and without any support when visitors were restricted and contagious disease was rampant. Learning about medical professionals who, for whatever reason, give patients something other than what they need is extremely unsettling, creating a fear that really shouldn’t exist yet has unfortunately proven to be a cause for concern in too many cases.

Amy (Jessica Chastain) works tirelessly as a nurse at a New Jersey hospital, trying to stick it out for a full year so that she can earn medical leave to have a much-needed surgery related to a dangerous health condition. She is comforted by the arrival of Charles (Eddie Redmayne), who quickly becomes a close friend and encourages her to bear through to reach that one-year mark. Charles’ newfound employment brings with it a worrisome spike in unexplained patient deaths, a pattern related to his presence that Detectives Baldwin (Nnamdi Asomugha) and Braun (Noah Emmerich) begin to investigate.

There is a lot to unpack in the inspiration for this film, which handles its content in a very straightforward and unextraordinary manner. The detectives are alerted to potential misconduct when the hospital brings them in to report a suspicious death, only to then stonewall and allege that nothing is wrong, merely that they were doing due diligence to cover their own legal bases. Viewers will surely adopt the incredulous perspective of the detectives, who see that Charles’ behavior is absolutely worthy of being examined, yet he continues to get hired at hospital after hospital despite many of his peers and supervisors believing him to be responsible for entirely preventable patient deaths.

Other projects such as Dopesick and Dr. Death have surely dealt a crippling blow to public confidence in the healthcare system, and this film will only add to that. Its content may have been better-suited to the documentary format, featuring interviews with any of Charles’ colleagues who would be willing to talk. The story presented here is less satisfying, leaning heavily on a drive to get to the truth without much actually being accomplished. It is staggering to note the number of red flags that Amy and everyone else saw in Charles and astonishing to see how each hospital ignored them since they didn’t want to be held liable if something untoward was exposed.

The Good Nurse comes from Danish director Tobias Lindholm, who was Oscar-nominated for his film A War, and a screenplay from 1917 scribe Krysty Wilson-Cairns. Its subject matter is undeniably interesting but its framing of it is not nearly as strong, spending time on the friendship built between Amy and Charles and on the long and difficult police investigation into him. Fresh off her Oscar win for her transformative turn in The Eyes of Tammy Faye, Chastain tackles a less sophisticated and challenging role here that doesn’t demand much of her. Redmayne plays against type but also may not have been the most appropriate choice for the part, exhibiting a warm gentleness until he shifts into a steelier and more closed-off personality once he has realized he may have been caught. This horrifying true story certainly sounded like a great idea for a film on paper, but its actual execution leaves something to be desired. As a film most will watch at home on Netflix, it may serve a purpose, but it doesn’t dig deeply enough into its source material to create something independently compelling.