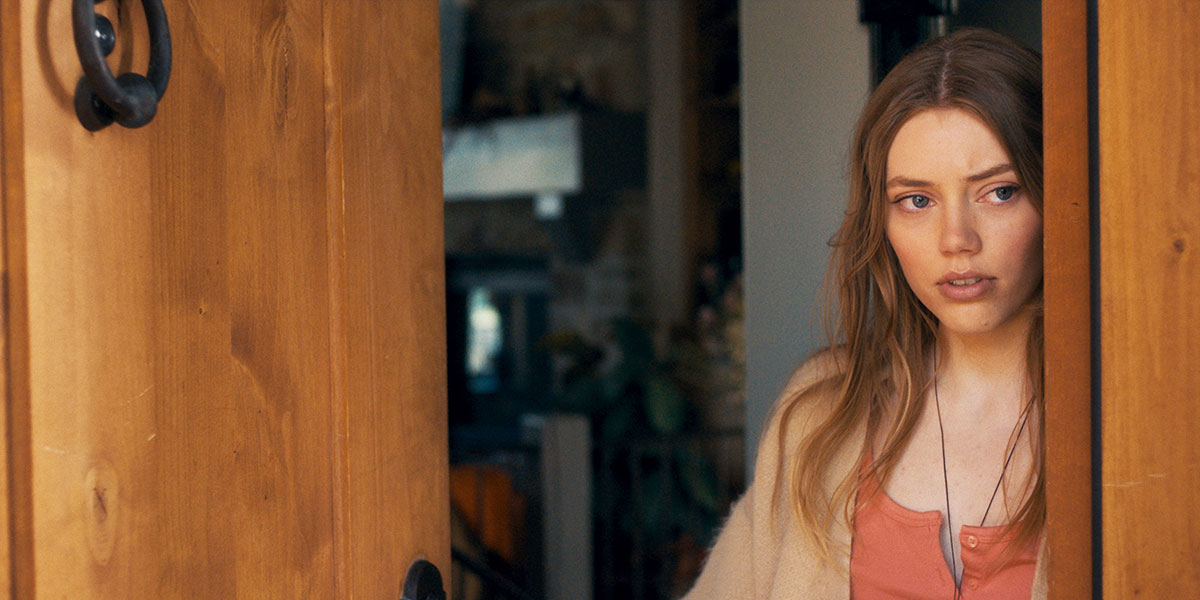 The world can seem much smaller than it is to a young impressionable mind who hasn’t had the full opportunity to experience it. That is particularly true when it comes to romance and attraction, which can manifest into something that feels like, and in some cases may actually be, love. But it can also be a fleeting sentiment that may be dangerous, one which others have the ability to tell won’t end well. Roost presents an unfortunate intersection of a mother and daughter and the older man with an undue influence over the younger of the two.

Anna (Grace Van Dien) is glued to her phone texting the man she met online, Eric (Kyle Gallner). Anna knows that he is older, but when he shows up at her house after driving 900 miles to see her on her seventeenth birthday, she is startled to learn that he is actually twenty-eight. Her affection for him remains, and she knows that introducing him to her mother Beth (Summer Phoenix) and her new assistant police chief fiancé Tim (Jesse Garcia) won’t be easy. But when Beth recognizes Eric, something she doesn’t tell Anna, it becomes clear that there is much more at play than a potentially inappropriate relationship.

Roost opens on Anna, seemingly framing her as the protagonist. She smiles frequently and engages well with others, but seems to disregard the fact that Eric’s interest in her may be predatory. He charms her with poetry references and compliments, but ignores their considerable age gap. As the film progresses and especially after Beth comes face-to-face with Eric, its focus shifts, and she becomes the primary character, reflecting back on mistakes that she made and wondering how much she needs to share of a past she previously kept hidden from the people closest to her.

This film features a trio of fantastic performances. Van Dien, the youngest member of the cast, is bubbly and vivacious, stopping just short of being over-the-top and vain as she pauses to note how others are taking in her behavior, whether or not that makes her want to change it. Phoenix delivers a lived-in turn as a mother fiercely protective of her daughter but who hasn’t yet had to exercise that particular bond given that Eric may well be the biggest threat she has ever faced. Gallner, who was memorable in the Sundance release Dinner in America, makes Eric hard to read and adds subtle touches to enhance his portrayal of someone with questionable and complicated motivations.

Roost is a film that transforms as it goes and its characters make new discoveries. When Anna is simply flirting with Eric over text messages and phone calls, the mood is light, but once Eric arrives and makes it clear that he’s not going anywhere, things shift into a darker and more worrisome tone. Director Amy Redford, in her second feature film, following 2008’s The Guitar, guides audiences on a compelling journey through Scott Organ’s screenplay, adding intrigue when necessary but focusing most on the people involved and the ways in which their lives become transformed by their newfound dynamics.

The degree to which the nature of Beth and Eric’s past interactions remain secret is not of great importance, since the specifics serve only to clarify the timeline and explain more of who they both are. But this is primarily a story about the bond between a single mother and her generally agreeable and loving daughter, and what happens when something gets in the way of that. The cast steers a narrative that is often uncomfortable and challenging but which ultimately feels lived-in and poignant.