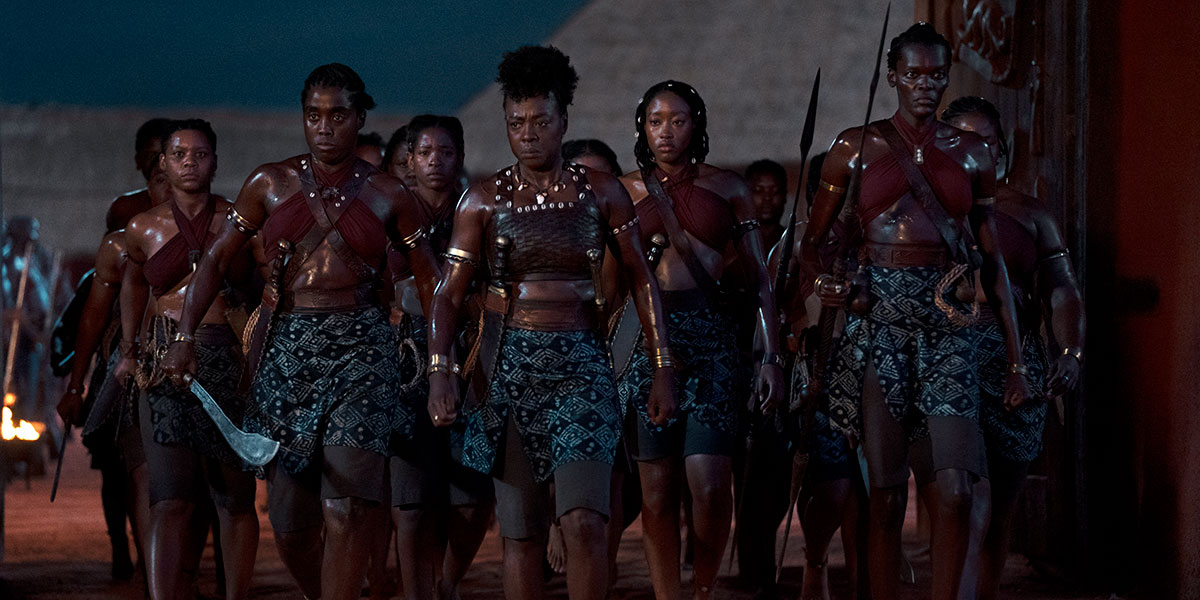 History hasn’t traditionally been great for equality of gender roles, though it’s not as if society has suddenly become enlightened all at once. Though not as commonly discussed or featured, there have been people and communities throughout history that have operated in a way that didn’t diminish or ignore the abilities of women. One prominent example is the Agojie, an all-female group of elite warriors charged with protecting the Dahomey kingdom in West Africa. The Woman King showcases their story in an epic presentation of both physical and emotional battles.

In the film’s opening scene, general Nanisca (Viola Davis) leads her army to surprise a camp of Oyo men who have taken a number of Dahomey people captive and are prepared to sell them as slaves to European traders. Upon returning to the kingdom, Nanisca has the ear of King Ghezo (John Boyega), though he is also influenced by the many women in his palace who do not regularly go to war. Rejected by every older man her adoptive father has tried to marry her off to and dumped at the palace gates as a gift to the king, nineteen-year-old Nawi (Thuso Mbedu) begins the arduous process of training to become one of the Agojie, struggling to accept some of the tenets but proving herself to be a skilled and committed warrior.

This film’s subject matter is enticing because it deals with complicated interacting themes, like African kings who welcome in Europeans as friends despite the knowledge that they will without hesitation treat any of them captured by enemies as cattle to be sold and traded. The notion of the “woman king,” who is supposed to rule alongside the man king, still does require being appointed by that man, and Nanisca must still report to him as she commands her army, though given that she is the one who actually goes out to battle, she should be the more dependable trusted authority. But that isn’t the way things tend to work, and even a fairer society still isn’t entirely equal.

Despite those evolutionary hurdles of sexism and white supremacy, there is a rich community of women in this film perfectly capable of fending for themselves in spite of the unnecessary interference of men. Davis, who has done thrillers like Widows before as well as action movies like Suicide Squad that haven’t allowed her to be directly part of the action, is a clear choice for the role of Nanisca, embodying strength and resolve and more than proving herself on multiple occasions when it comes to her physical prowess and intellectual capacity. She has great support from Lashanna Lynch and Sheila Atim as two of her closest and most competent advisors who offer support to her and to Nawi. Mbedu, who delivered an incredible performance in The Underground Railroad, gives Nawi a fighting spirit, and it’s marvelous to watch her grow and take power where she hasn’t had it before.

Seeing a film that features powerful women fighting to defend far less brave man in an era where feminism was a nonexistent thought is cause for celebration, and this film also tackles the complicated nature of the participation by African kingdoms in the proliferation of slavery, seen in some cases as a necessary evil to bolster business ties and general prosperity. This is primarily an action movie and shouldn’t be seen as a political project, though it will hopefully lead to more studio-produced films where women of color receive top billing. While its concept is enticing and original, the finished product doesn’t feel quite as vividly creative, telling a somewhat expected story that isn’t quite as invigorating as the characters within it.