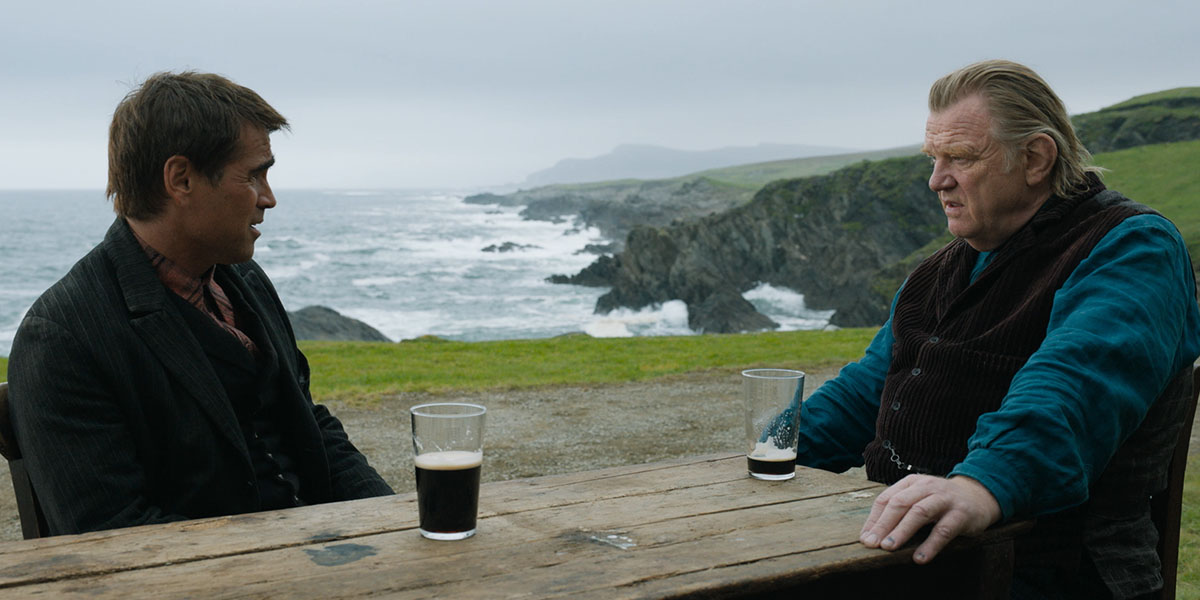 The Banshees of Inisherin

Martin McDonagh is a very specific type of filmmaker. Both he and his brother John Michael have directed a number of films, very often starring actor Brendan Gleeson, that wrap dark drama in an outer comedic layer. It’s often not easy to tell whether to laugh or to cringe, and that’s what, for many, works so well about the brothers’ films. Devotees will be pleased to see a very familiar approach to Martin’s latest project, The Banshees of Inisherin, which feels like a totally fresh start plot-wise but soon reveals recognizable traits of his storytelling style, inviting audiences along for what feels like an absurdist comedy and turns into something else entirely.

In 1923 on the Irish island of Inisherin, Padraic (Colin Farrell) goes for a pint at the pub with his best friend Colm (Gleeson) every day. When Colm doesn’t answer the door one day, Padraic is surprised to find him later at the pub sitting by himself. Colm expresses bluntly that he just doesn’t like Padraic any more, requesting that he stop speaking to him. Padraic is at a loss, unaware of what he could have done to upset his friend, and continues to push Colm and others to sort it out. Unamused and tired of this dull influence on his life, Colm makes clear that he is serious, telling Padraic that he will cut off one of his own fingers if he doesn’t stop bothering him.

That setup doesn’t feel terribly sophisticated, and there’s a great deal of repetition in it as Padraic continually asks for clarification and everyone tells him the same thing. This film reunites Martin’s In Bruges costars Farrell and Gleeson, though they’re playing radically different roles. Farrell is an upbeat, well-meaning idiot, while Gleeson is a humorless musician who just wants to be left alone. It’s a dark part for Gleeson, who in previous McDonagh collaborations like The Guard and Calvary was a source of humor and a softer if similarly serious character, respectively. The two definitely work well together, and their interactions make for an engaging if not entirely fulfilling viewing experience.

There are also two welcome new additions to the McDonagh repertoire. Barry Keoghan, who has appeared in films like Dunkirk and The Killing of a Sacred Deer, portrays the one man less well-regarded than Padraic on the island, the wayward son of the local policeman who hasn’t accomplished much and always almost says the right thing. Kerry Condon, who did appear in a small role in Martin’s Three Billboards Outside Ebbing, Missouri, is the definitive standout of the film as Padraic’s sister, who knows there is more to life than her miserable existence of getting her brother out of trouble and keeping his precious donkey from entering their home. Keoghan and Condon anchor some of the film’s most memorable and potent scenes.

The Banshees of Inisherin ultimately repeats the same problems as Martin’s last film, Three Billboards. While audiences may be laughing hysterically at the absurdity and banality of two grown men so publicly ending their friendship for no apparent reason, the dramatic pivots in the script feel far too sharp, and it’s often hard to tell where the film is going. It’s undeniably creative and clever, but it just doesn’t feel like a cohesive whole. There are moments that feel like they serve no purpose yet are impactful, while others that should be germane fall flat. It makes for an unsettling end product, one that may frustrate as much as it delights and enthralls.