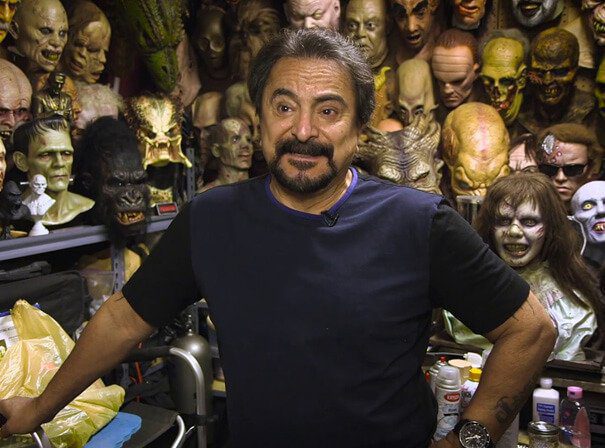 The most powerful and memorable horror films and television series are often those that subvert both the traditional emotional and visual elements of the genre. Horror icon Tom Savini, who has made a name for himself in Hollywood as a prosthetic makeup artist, stunt performer, actor and director since he launched his career in the late 1970s, effectively infuses his projects with compelling visuals that aid in chronicling the characters’ emotional arcs.

Savini has proven his expertise by helming several horror movies, most notably the 1990 remake, ‘Night of the Living Dead.’ He has also worked as a make-up artist and special effects technician on entries in the ‘Dawn of the Dead,’ ‘Friday the 13th,’ ‘The Texas Chainsaw Massacre’ and ‘Creepshow’ franchises. He most recently created the Grabber mask with Callosum Studios for this summer’s hit coming-of-age supernatural horror film, ‘The Black Phone.’ As an actor, he’s known for appearing in such projects as ‘Dawn of the Dead,’ the ‘Creepshow’ series and the ‘From Dusk till Dawn‘ franchise.

Savini generously took the time to participate in a panel on Saturday afternoon during the fall 2022 edition of the New Jersey Horror Con and Film Festival, which was held at the Showboat Atlantic City hotel. During the panel, the filmmaker discussed his experiences as an actor and a make-up artist and special effects technician on such movies as ‘Django Unchained’ and ‘Trauma,’ as well as the importance of teaching his students how to make audiences believe that what they’re seeing on screen is real.

During the panel, Savini was asked about his experiences working with Quentin Tarantino throughout his career, with whom he worked with on such films as ‘From Dusk Till Dawn,’ ‘Planet Terror’ and ‘Django Unchained.’ “Tarantino is just a big kid who happens to be a genius. He’s great fun. Have you seen ‘Django Unchained?,'” he asked the audience, to which he received an overwhelming positive response.

“I don’t know if you remember, but I had the attack dogs. I had a 15-minute session with the dogs, during which time the trainer would say, ‘Stand up, sit down, look over there.’ The dogs did everything he said, like they understood English!,” the actor divulged with a laugh.

“He then said, ‘Now I’m going to make the dogs go crazy.’ He then motioned, and the dogs dragged me 30 feet,” Savini revealed, which garnered a laugh from the audience.

“The actor who played the slave is up in he tree, and then Leonardo DiCaprio pulls up and said, ‘Shut these dogs up, I can’t hear,” the performer also shared. “The stunt guy behind me was supposed to say, ‘Get these dogs out of here,” and he wasn’t saying it.

“Then all of a sudden, I hear him yell, “F*ck!,’ and the dogs were attacking him,” Savini shared, which gained another laugh from the audience.) They tore his pants off, bit him on his as* check and dragged him to the ground by his as* check. Then Quentin yelled, ‘Lunch!,’ a revelation that garnered another laugh from the audience. “So the guy’s as* was bruised,” he shared.

“So then we come back from lunch and the dogs attack me, and I’m not stopping until Quentin yells ‘Cut,’ and he eventually did. Then the trainers said the reason the dogs’ bites hurt so much is because when they’re trained to attack, they don’t bite with their teeth, so the pain comes from the pressure of their jaws,” the actor revealed. “So the stunt guy and I had to get tetanus shots.

“Then the next day, they brought the slave dogs with the trainer, and they attached a fake arm to the stunt guy, so they didn’t bite his arm off. He had his real arm behind his back for every take, and you could see it, so Quentin was getting frustrated,” Savini divulged.

“Then I’m standing there and Quentin walked around and put something in my hand. I looked and it was five bucks!,” Savini shared, which garnered another laugh from the audience. “He said, ‘We have a tradition on my set that when someone from a different department solves a problem for another department, you’re the five dollar hero.”

The filmmaker also delved into how he makes sure the prosthetic makeup and special effects he creates for his projects look realistic on screen. “I do the same thing that a magician does; I make you believe that what you’re seeing is a reality. That’s what I tell my students; I tell them, ‘Your mindset needs to be, what do I need to do make people believe that what they’re seeing is reality?,” he noted.

“That goes back to Dario Argento’s (1993 horror thriller film,) ‘Trauma.’ Piper Laurie’s characters was supposed to have her head cut off, roll across the floor and rest against the wall. While her head is rolling across the floor, she’s supposed to say the word, Nicolas,” Savini shared. “I thought, how are we going to do that?

“But that mindset was, what do I need to see? I need to see a head come off – that’s easy,” the makeup and special effects artist noted.

“Then Piper, who played Carrie’s mother in the movie ‘Carrie,’ showed up, and she’s claustrophobic. So I couldn’t make a fake head for the prosthetics, and plus, she has to say, ‘Nicolas.’ Do you know what it would take to make an animatronic head and form the word Nicolas?,” Savini noted.

“So when she showed up to shoot the scene, we put a wig on a prosthetic head. It then took 17 takes for the head to roll away from the body,” the filmmaker also divulged.

“Then Dario Argento came in and asked, ‘What are you doing?’ I told him to watch the video test, and he loved it,” Savini added. “So it all came back to the idea of, what do I need to see?”