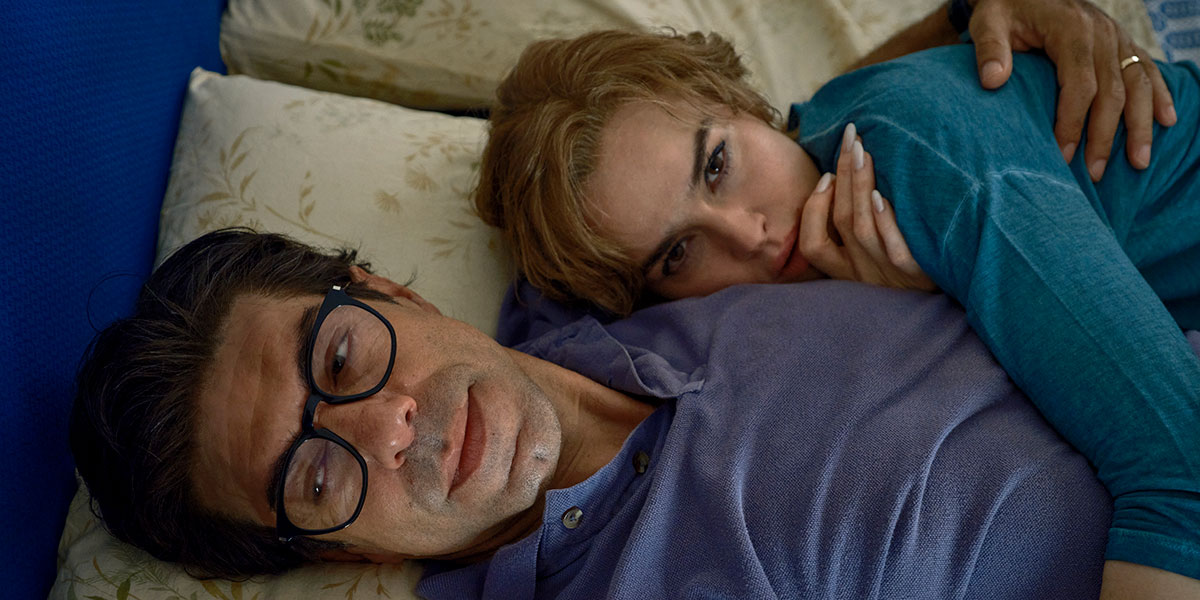 People can plan for their lives and to achieve their dreams, but there may be any number of circumstances that get in the way. Holding on to childhood love, for instance, may be unsustainable, and other uncontrollable events can create a new course that might otherwise not have been traveled. The Hummingbird, adapted from the novel by Sandro Veronesi, recounts the story of a man at all points in his life, moving frequently from childhood to end of life and everywhere in between as he faces numerous celebratory and mournful occasions.

Marco Carrera (Pierfrancesco Favino) grows up as the child of parents that don’t particularly get along, and has complicated relationships with his sister and brother. He yearns to be with his neighbor Luisa (Bérénice Bejo), continuing that passion long after he has grown and married another woman, Marina (Kasia Smutniak), a union that brings its own problems. Marco gains great joy from spending time with the important people in his life, like his daughter and granddaughter, but he also keeps himself from giving in to impulses he knows won’t be good for him, even if that means preventing happiness that could be easily attained.

This film puts great emphasis on its non-narrative construction, an approach that is both intriguing and mildly confusing. It’s often hard to discern exactly when in time a particular scene is taking place, with only the actors to clue in the relative era of youth or substantial makeup to indicate old age. It’s a dizzying but nonetheless fascinating way to tackle the story, one that remains grounded on Marco at all points throughout his life. The loss of certain individuals close to him is formative, and their absence is felt in his demeanor, even if they may return again because the editing is not linear.

The story also leans heavily on coincidence and fate, beginning early on when a teenage Marco boards a plane with a friend known for bringing bad luck, and his panic attack results in them deplaning. They soon learn that the flight has crashed, killing all on board, and that event sticks with Marco enough to, years later, go after Marina, a flight attendant who was also supposed to be on that flight and whose reasons for not boarding haunt her. Marco also receives ominous warnings from Marina’s therapist (Nanni Moretti), who presses him to reveal the nature of his emotional affair with Luisa.

Director Francesca Archibugi’s film feels like an epic, even if there is nothing altogether remarkable about Marco’s life. Its construction is such that characters come in and out of the story, just as they may do in reality, showing up at unexpected times or just for the important moments, with precious little interaction in between. By its end, The Hummingbird has prepared audiences to be invested in these characters and bid them farewell, breaking from its pre-established format for an emotional and chronological conclusion that comes after almost everything else.

This film is anchored by a dependable turn from Favino, a comfortable leading man who has also turned in memorable performances in The Traitor and The Best Years, among others. He makes Marco likable and transparent, not always spurred to action in a way that might benefit others in his life but intent on making them happy to the best of his abilities. Bejo and Smutniak present portrayals of women who yearn for one thing but aren’t necessarily able to achieve it, and also realize in the process that it may not have been what they truly wanted. The entire cast contributes to the experience, one that captures the scope of Marco’s life and those he meets throughout it, an ordinary existence made noteworthy by the complexity of his relationships.