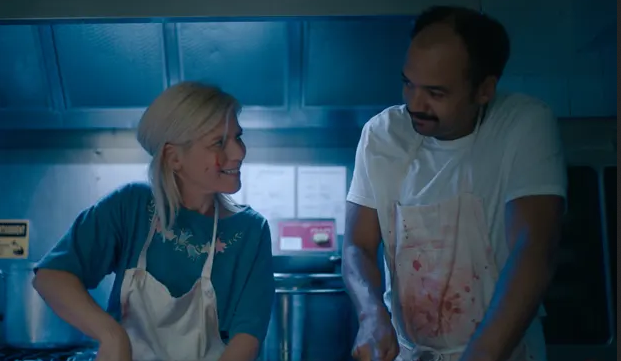 A cannibal is a human being who eats human flesh, the word entering the world in 1550. No human society today takes part in what may well be a delicacy, but vegans are likely to extend the word “cannibal” to the eating of any animal. “Some Like It Rare” is a French entry that is one of the few non-documentary films that deal with the antipathy of some vegans toward the vast majority of people who eat red meat, its comic features interacting with slasher elements. Fabrice Eboué, who directs, co-stars and has co-writtten the offering, has previously directed “Simply Black,” billed as a politically incorrect look at the role of Black people in French society.

Vincent Pascal (Fabrice Eboué) takes on the role of a demon butcher of meat street and should remind film buffs of his closest relation, Sweeney Todd, which is Tim Burton’s look at a London fellow wrongfully imprisoned who seeks revenge for the rape and death of his wife. Todd teams up with a tenant just as Vincent teams up with his wife Sophie (Marina Foïs).

Vincent is a butcher who, together with his wife Sophie, fears that his business is soon to go belly-up, no thanks in part to competition from Marc Brachard (Jean-François Cayrey) and his wife Chloé (Lisa Do Couto Texeira), who manage four boucheries. As though Vincent’s troubles are not enough, he is facing attacks by vegan activists who smash up the store and drench its walls with fake blood. Sophie becomes the story’s Lady Macbeth, threatening to leave her unexciting husband for someone who does not always play it safe. Their marriage is saved by a stroke of luck. Their car runs over one of the vegans at night, and with no witnesses to the accident, they plan the perfect crime. They will butcher the body and, like the aforementioned Mr. Todd will serve the human meat to customers. Almost needless to say, the customers begin to line up around the block for slices of what the butchers call Iranian pork.

Realizing their sudden good fortune, the couple go out to avenge themselves on the vegans by hunting them down, finding that these herbivorous creatures taste great—just like the hens that organic farmers suggest are fed nothing but vegetables. Pushed relentlessly by his wife, Vincent reluctantly continues the serial killings, noting that his business is saved and his wife now pays attention to him. The couple aspire to the money being made by their friends Marc and Chloé, who brag unashamedly about their life of luxury. The satirical thrusts are best when we hear from the Marc, who considers himself a bourgeois gentilhomme.

In much that way that Sweeney Todd not only gets revenge from slaughtering his enemies but learns that he enjoys the killing, so does Sophie, who sees herself acting out what she sees on crime TV programs—and then some. Ultimately, albeit with Vincent’ reluctance, they proceed after their prey with out-and-out serial killing.

If you’re going to compare this film with “Sweeney Todd” or even with Marc Caro and Jean-Pierre Jeune’s 1991 “Delicatessan,” you may be disappointed. The comedy is muted rather than belly-laugh assured, and the butchery of human beings is brought to a peak only near the conclusion as knives and cleavers take flight. This is an amiable entertainment that could be enjoyed even by folks who are repelled by the thought of attending a horror picture.