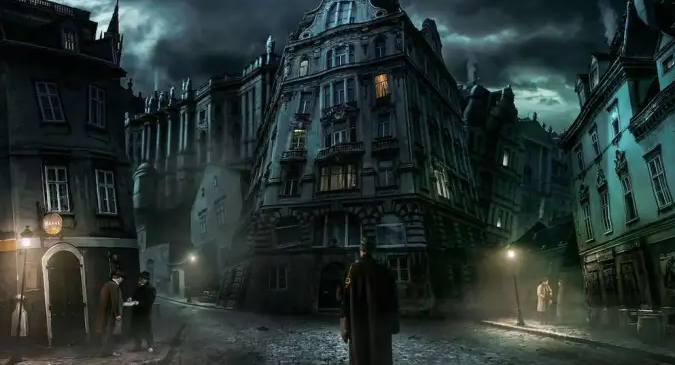 Critics often review movies as though they are novels, noting cinematography, editing, and special effects in a small paragraph if at all. “Hinterland,” however, focuses so much on its expressionistic flair, that the artistry overtakes even the plot and acting as its central focus. Expressionism rejects realism and naturalism, meaning that what you see on the screen looks only vaguely like the place being described. A good example of expressionism in painting is Edvard Munch’s “The Scream” and El Greco’s “View of Toledo.” “Hinterland” uses chromakey compositing technology in which the backgrounds are inserted after the work of the actors.

When we first see Peter Perg (Murathan Muslu), he looks like the only fellow who, if in the audience for Stephen Colbert’s Late Show, would not stand up, laugh and cheer. You don’t mess with this dude, although the Russians were able to subdue him for most of the two years he spent in a POW camp during World War I. No sooner is he freed then he is faced by a boatload of problems and motivations. One is that his Vienna, for a hundred years the showcase of Europe and for sixty-eight under the rule of emperor Franz Josef, is now a rotting hulk. Another is that he has PTSD; you would too if you experienced his captivity. Third, he finds out that his wife Anna (Miriam Fontane) has been having an affair, presumably thinking that her man would never come back from the war. Fourth, he makes sure to get back his job with the police department as a crack criminologist who is conducting a no-holds-barred for a serial killer who has already knocked off four soldiers. What? Why would an Austrian be looking exclusively for people who had fought for the home front?

Of course we will learn why the killer will stop at nothing to torture and murder many soldiers with whom he had once spent a considerable amount of time.

There may not be another film this year that will have the same angular look at a land with photography stylized by visual-effects czar Oleg Prodeus and company. The Austrian-Luxembourgish production is under the direction of Stefan Ruzowitsky after a thirteen-year pause begun after completing “The Inheritors” (a farmer is murdered at the turn of the 20th century in an Austrian farming village). Most of the action takes place in the dark, a climactic one in the bell tower of St. Stephen’s Cathedral and other scenes in the underground of Vienna’s sewer tunnels. The production is blessed by a strong performance from Murathan Muslu, in almost every scene, with tensions rising as Perg is about to find the killer before he becomes the guy’s fifth victim. There is a brief romantic interlude between Perg and pathologist Theresa Körner, a fashionably dressed, assertive woman who has no problem taking the initiative to ask Perg for a date.

This is solid filmmaking with not a word of English is spoken.

In German with English subtitles.