Sometimes the most devastating circumstances people experience can ultimately prove to be the inspiration they need to find a clear purpose in how they want to lead the rest of their life. That’s certainly the case for Ryan Kwanten‘s protagonist of former soldier, Jake Atherton in the new action film, ‘Section 8.’

After his wife and their young son become the victims of a heinous, targeted death, the veteran accepts an invitation to join the titular shadow government agency in an effort to rid the world of the criminals who targeted his family. But along the way, Jake begins to realize there’s more to life than seeking personal vengeance, and sets out to stop such retribution, in order to secure peace for society as a whole.

In ‘Section 8,’ after avenging the murder of his wife and child, Jake is sent to prison with a life sentence. He’s given a shot at freedom when the eponymous shadow government agency, which is run by Sam Ramsey (Dermot Mulroney), recruits him for an off-the-books assignment. However, Jake soon realizes that Section 8 isn’t what it seems.

The feature is now playing in theaters, courtesy of RLJE Films. The drama is also currently streaming on AMC+.

Sesma generously took the time recently to talk about helming ‘Section 8’ during an exclusive interview over the phone. Among other things, the filmmaker discussed that he was in part driven to direct the film because he appreciated that Kwanten’s protagonist of Jake is a relatable veteran who was just trying to take care of his family before he was lured into joining the titular government agency. The filmmaker also noted that he enjoyed collaborating with the SAG Award-nominated ‘True Blood’ alum, who he called a great character actor, and the rest of the cast on creating both the characters’ arcs and stuntwork throughout the movie’s production.

The interview began with Sesma discussing how he became involved in helming ‘Section 8.’ He shared that one of his fellow producers on the drama, Brandon Burrow, approached him with the script as the U.S. was coming out of COVID pandemic lockdown, and Hollywood began resuming productions on movies.

As Sesma was reading the screenplay for ‘Section 8,’ he “thought it was really interesting and exciting. It was a really stacked indie action movie,” he divulged.

“I had done a kind of ‘Mission Impossible’-style flick before with another movie, called ‘Vigilante Diaries.’ But (‘Section 8′) had an everyday man’s appeal to it. Ryan Kwanten’s character wasn’t Ethan Hunt or Jason Bourne, who are these special forces, black ops kinds of guys,” the filmmaker emphasized. Jake “was just a regular veteran who was just paying his bills and trying to feed his family, and then gets thrust into this crazy situation.

“So I thought that was an interesting, different way to approach this, and this was a different script than I normally get,” Sesma revealed. “So that’s what was exciting to me to take on this film.”

Further speaking of Kwanten and his co-stars, Sesma then delved into what the casting process was like for the film. “The casting was actually pretty easy because the package already came with the cast, for the most part. All of the main stars were in, but the supporting characters were cast in a later process. So most of the main cast was already attached when I signed as the director,” he shared. “It’s an amazing cast, so that was definitely a selling point for me to take this movie on.”

After signing on to direct the film, Sesma enjoyed the process of collaborating with the actors on building their characters. “It was a great experience. Working with Ryan was one of the most exciting pieces of working on this project. Ryan’s not this action movie star kind of guy; he’s instead this great character actor who has an amazing range,” he noted.

“When he and I were talking before we went to shoot, we were making sure that we were crafting his character to make him as grounded and real as possible,” the filmmaker continued.

“We knew the shoot ’em up element was going to be more straightforward, but we wanted to make sure that his purpose of why the rest of the film takes place (after his family’s murders) was really grounded and sold. So that was a really fun and interesting collaborative process,” the helmer divulged. “Ryan is an incredible actor and talent, so working with him was a really fun collaborative process.”

Besides working with the actors on their characters’ emotional arcs, Sesma also enjoyed collaborating with them to create the stunts and action sequences throughout ‘Section 8.’ The drama “was the first time that Scott and I worked together, so that was a really fun process. I’ve been a fan of his for a long time,” he shared.

“Obviously, the stuntwork and choreography is central to all the action. So working with Scott on the stunts, and seeing the choreography come to life in the locations was a really fun process,” the filmmaker shared.

“Mickey’s character was also really fun to flush out, and he really understood his relationship as a father-figure to Ryan,” the director continued. “I think Mickey really came with it on this one; he was definitely a lot more emotionally invested in this one. We worked on another movie together a couple of years before, so it was a really good experience to work with him again on this one.

“Dolph was also this anchor for this film. Dermot’s a buddy, so he’s a concrete, rock-solid actor, and we really understand each other. He really understood who his character was – he’s the likeable bad guy,” Sesma added. “So it was a really fun process, for sure.”

Further speaking of the casino scene, the filmmaker then delved into what was the process was like of deciding where ‘Section 8’ would be shot. “We shot a piece of this movie in Los Angeles, and then broke for a month because of scheduling. Dolph had to go do another thing, and I had to shoot another project in between,” Sesma divulged.

“We then brought the project down to the Coachella Valley, where I started my career. So I was really able to bring out the scope of the picture, rather than what it was on the page,” the helmer continued.

“The casino sequence wasn’t scripted; it was a totally different location,” Sesma revealed. “Also, the senator assignation sequence was supposed to be inside a house, but I then switched it to an outside fundraiser.

“So being here, and being supported here, from the beginning of my career as a filmmaker, I was able to up the ante on the production value,” the filmmaker noted. “We did some of the shootout sequences in the city of Coachella. If we filmed in other locations, there would have been a lot more red tape, and would have been more logistically difficult.”

Sesma then described the process of figuring out how he would visually shoot the locations that are featured in the movie as “an interesting process. We allowed the locations to inform the cinema of it, as opposed to other way around.

“My DPs (Directors of Photography) and I always say, especially in the indie filmmaking world, that we’re playing filmmaking jazz. In the indie world, the ability to improv and pivot with the resources you have really informs how you shoot your movie. Shooting inside a house is cinematically different than being in a wide opens pace,” the director pointed out.

“So we allowed those locations to really inform how we were going to shoot this film, whether it was with a gritty hand-held camera or a static Steadicam shot. I think that’s the really cool part making action films, as it’s completely dynamic; you’re able to go from one location to another all the time,” Sesma also shared.

Further speaking about working on the improv process on the set of ‘Section 8,’ Sesma divulged that he’s “always fancied myself as being a collaborative filmmaker. But I always treat the script as the blueprint and the words as our guideline,” he explained.

“But a lot of times, I always want everything to feel as real as possible, and feel like everyday conversation, especially with a movie like this one. Sometimes, the exposition comes off as a little bit flat, but it’s not the writing; it’s the genre,” the filmmaker explained.

“So I always try to be loose with everything. I grew up in the ‘1980s with a lot of Spielbergian movies. I’ve always liked how Spielberg’s early movies are very loose with the dialogue and feature a lot of improv. The same thing is true with a lot of Scorsese’s early projects – there was a lot of improvised stuff,” Sesma shared. “So I like to give the actors a lot of space to play, and we then take it from there,” he concluded. 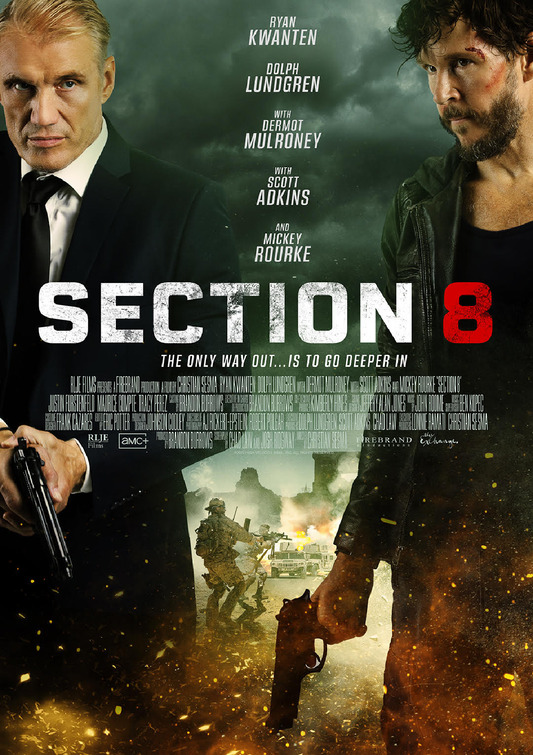