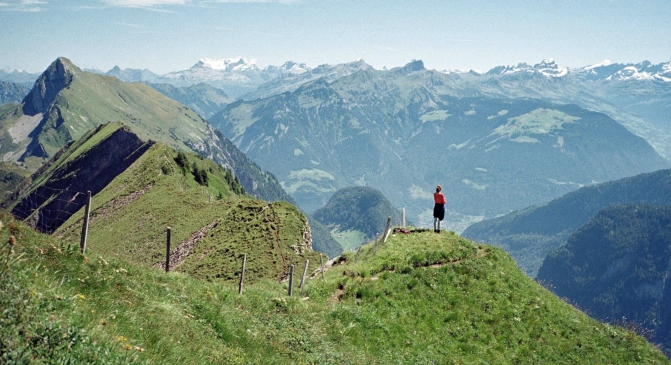 A Piece of Sky (Drii Winter)

Switzerland must be as close to Utopia as you can get on this Earth. The most aggressive foreign countries do not bother its residents, none of whom having to fight in both world wars. Folks in German-speaking Zurich, French-speaking Geneva, and Italian-speaking Lugano get along. Industries are light: chocolates, watches, tourism and cheese, thus limiting the pollution that most of us to face. The mountain scenery is awe-inspiring. But what good is all that if you don’t have your health? “A Piece of Sky” looks at a Swiss man who is married to a woman passionately in love with him but whose life—and the life of his wife—go South when he is diagnosed with a brain tumor.

In his second film, Michael Koch slowly examines what happens to a family when a member receives a death-sentence diagnosis, allowing us to feel what it’s like to deal with an existential tragedy. To ramp up these feelings, Koch has a Greek chorus-like choir stand perfectly still amid the snow-capped mountains, to sum up the conveyed emotions. The most noteworthy is a chorus of death: the end that comes when we are “world-weary and longing for rest.”

Aside from being known for chocolate, cheese and fine watches, the Swiss have the most exquisite notions of time. Some of their highway signs tell you not just the number of kilometers remaining in your road trip but the number of hours and minutes you should expect to drive. If you have been to a bank in Zurich, you would marvel at the speed that the tellers count and dispense money. In that regard, “A Piece of Sky” is ironic, because in the Alpine village, life moves a snail’s pace. In fact, the opening scene, one that lasts some three minutes, we gaze at a bunch of rocks, capturing the perception that these stones are in no hurry, and neither are Anna (Michèle Brand) and her husband Marco (Simon Wisler).

Koch immerses us in the life of a place that is not simply a village like what you might expect here in the U.S., but a place so remote that you would have to drive up to an hour through the snow on a winding road to get to something that looks like civilization. The village residents hang out in a bar, shooting the breeze, while they order beers served by Anna, a waitress who also serves as a mail carrier to support herself and her daughter Julia. Marco, a farmer from the lowlands, might be mistaken for a bear or an ox if you spotted him from a distance. He is large, a man of few words, but articulate enough to propose marriage to Anna. You would be hard-pressed to find a movie showing their passion better than the long-take scene of the two dancing at their reception.

When Marco, afflicted with headaches that he tries to ignore, is diagnosed with a tumor on the part of the brain that governs impulsivity, Anna is confronted with a choice: leave him with a clinic, or take care of him at home. Her choice would seem obvious when she witnesses her husband committing a violation in front of young Julia.

In photographing the Alpine scenery, Armin Dierolf does not settle for simply capturing the allure of a skier’s paradise. He captures the heavy labor required of farmers to make ends meet, such as arranging the sexual bonding of a bull and a cow (who get right to business, no foreplay), showing us what happens to a cow that does not become pregnant. (Hint: though the bull may be infertile for all we know, the cow goes to the slaughterhouse.) The farmers do not employ harvesters, which would be useless given the levels of the mountains, but use scythes, a farming instrument sometimes used to portray Old Father Time on New Year’s Eve. Bales of hay are not harvested with steam shovels but simply rolled down to where needed.

“A Piece of Sky” shows us the reality of mortal illness with the long takes that American movies might not get away with. That these are first-time actors convincing in their shows of emotions is testament to director Koch’s professional competence.

In Swiss German with English subtitles.