The most harrowing struggles for survival that people have endured in the past often times lead them to build up even more endurance to continue fighting to protect themselves in the present. That’s certainly the case for both the infamous deadly antagonist, Art the Clown, and new series protagonist, Sienna, who’s played by actress Lauren LaVera, in the upcoming horror movie, ‘Terrifier 2.’

The project is the highly anticipated sequel to the cult film, ‘Terrifier,’ which was distributed in 2018. The follow-up was written and directed by Damien Leone, who also penned and helmed the original feature, as well as the 2011 short of the same name that the two features are based on.

‘Terrifier 2’ will be released in theaters this Thursday, October 6, by Cinedigm in partnership with Iconic Events. The drama’s official distribution comes after it had its world premiere at FrightFest and its North American premiere at Fantastic Fest.

Set a year after the original movie, just days before Halloween, ‘Terrifier 2’ follows Art the Clown (David Howard Thornton) as he’s resurrected by a sinister being. He makes his triumphant return to Miles County to once again wreak havoc on its residents, after he gained a cult status amongst true crime fans in the months since his rampage that left friends Tara and Dawn dead.

Pretten Jonathan Shaw (Elliot Fullam) is one such true crime fan who’s become fascinated by the case, and wants to dress up as Art for Halloween in the wake of his father’s recent death. However, his mother and older sister, Barbara (Sarah Voigt) and Sienna, are adamantly against the idea, partly because Sienna has been having terrifying dreams about the renegade killer clown. As Sienna and her younger brother celebrate the holiday with their friends at school, they must not only contend with the pain of recently losing their father under harrowing circumstances, but also Art’s determination to make the siblings his next victims.

LaVera generously took the time recently to talk about starring in ‘Terrifier 2’ during an exclusive interview over Zoom. Among other things, the actress discussed how after she was cast as Sienna, she created a binder that included information about the character, as well as other famous final girls, that helped her connect with the hero. She also mentioned that she enjoyed working with Leone on the film, as he was very collaborative with her and the rest of the cast in developing their characters.

The conversation began with LaVera explaining how she was cast as Sienna in ‘Terrifier 2.’ “I got this audition just like any other audition; my agent sent it to me, as well as the sides, which are basically scenes that I would audition with. I did a couple of self-tapes; I think two, to be specific,” she shared.

“Then my final audition was in person; it was a chemistry read with Elliott Fullam, who plays Jonathan, as well as Casey Hartnett, who plays Allie. We did that in person for a few different scenes, maybe five,” the actress continued. “Then Damien told me I got the part!

“When I initially got the audition, I loved the part of Sienna, but I didn’t think I was right for it. So I actually sent the audition information to a friend of mine because I thought she would be perfect for it,” LaVera divulged.

While the film serves as the sequel to the original feature, LaVera actually didn’t use the first project as source material for her audition. “I didn’t watch the first film until the day I found out I was cast,” she revealed. “The reason being is that I knew the film existed, but I didn’t have time to watch it before my first audition or my next audition.

“So by my third, in-person audition, I thought, I’m doing something (Leone) likes. So I want to avoid watching the first film so that it doesn’t influence me in a way that might trip me up,” the actress continued.

“So I ended up watching it the day I was cast and loved it. I’ve already watched it three times this Halloween season so far!,” LaVera also shared.

“As far as my preparation, I have a whole binder of notes on Sienna. I also spoke to Damien a lot about the character, and asked him who inspired her. I asked him if she’s like any other final girls, and he gave a list of wonderful Halloween faves, like ‘Halloween,’ ‘Aliens’ and ‘Scream,'” the performer divulged.

“So I ended up making a list of the aspects of these final girls, putting it in my binder and sent it to Damien. I asked, ‘Do you think this is Sienna?,’ and he said, ‘Yes, I think that’s her,'” LaVera shared.

“He also made a playlist for her, which I listened to frequently because I was also filming other stuff. So listening to the music really put me in (Sienna’s) headspace,” the actress added.

Speaking of the fact that Sienna is the final girl in ‘Terrifer 2,’ LaVera embraced the process of creating that aspect of her, including how strong-minded and determined she is throughout the story. “I think that’s what drew me to Sienna the most, and she was written that way. So it was easy for me to embody that because that’s what was presented to me,” she explained.

“What I think I loved the most about Sienna is her flaws, fears and traumas that I was able to explore. So then it’s even more impactful when you see her step into her independence and strength,” the performer also shared. “So that was probably my favorite part about Sienna – she’s strong because she overcomes her weaknesses.”

Further speaking about Leone, LaVera further delved into what her experience was like of collaborating with him in developing Sienna’s arc throughout the follow-up’s production. “Given the type of scripts that he presents, Damien is surprisingly soft-spoken and very easy to work with, and very chill,” she revealed.

“He does like to do a lot of takes; there were anywhere from 10-20 takes per scene. So he is a perfectionist, which I love,” the actress also divulged.

“He’s really a joy to work with because he’s collaborative and cares a lot about what anyone has to say about the characters. He asks, ‘Does this work?,’ and also says, ‘This is what I think. Now just play.’ So he really gave the actors room to play, which I can really appreciate as an actor,” LaVera added.

The performer added that she enjoys being given the opportunity to improvise during production. “There were definitely scenes where we improvised. I’m thinking of one in particular that was with Sarah (Voigt), who plays Barbara, my (character’s) mother. I said a couple of lines that weren’t in the script, and they ended up being in the final cut of the film,” she shared

“So I felt really supported in my decisions. Having that improv experience was invaluable to an experience like this, and made it more fun and truthful in the end. So I was free to do as much improv as I liked, and that was to Damien’s credit,” LaVera added.

Like the actress mentioned, ‘Terrifier 2′ features an ensemble cast that also includes Voigt, Fullam and Hartnett. LaVera then delved into what her experience was like of working with her co-stars on building their characters’ relationships and interactions.

“I had a blast with the cast, and an incredible time working with them. Sarah, who plays my (character’s) mom, is so hilarious. There are a couple of scenes that while we were getting her coverage, I was crying laughing because she’s so funny, and is such a joy,” the performer enthusiastically exclaimed.

“Elliott Fullam, who’s like my partner throughout this entire journey, was so incredibly committed and hard-working for his young age. He inspired me to want to work harder during every scene,” LaVera added.

“Beside from him, Kailey (Hyman) and Casey, who play my (character’s) best friends, are just brilliant actresses. So I always felt like I needed to bring my A-game with them, as well,” the actress continued.

“The entire cast was just so talented that I felt supported and ready to go. They were wonderful people, as well,” LaVera also shared.

Going back to how Sienna is the final girl in fighting back against the series’ villain, Art the Clown, the performer also cherished the experience of creating the stunts and physicality for her performance of the protagonist. “As far as Sienna carries herself physically, I had my thoughts about that. In the beginning of the film, she’s a bit more hunched over because she’s an artist and is always working on her cosplay,” she noted.

“I think that carries throughout the film, especially when she’s in school. She’s empowered by her friends, but she’s still kind of a shy person and suffers from trauma, I think she carries that physically,” LaVera explained.

The drama’s costume Designer, Olga Yarlug, created the Halloween cosplay costume that Sienna wears on Halloween, which also helped inform the actress’ physicality during her performance. “Once I got the costume on that Olga provided for me, that helped me embody the character a lot more. Even the way it fit made sense,” she shared.

“Once the costume came on, you see Sienna coming into her confidence, and she’s standing up straighter. By the end, I think she holds some of the strongest stances I tried to give to the character. I think it was a bit of a growth, both physically and emotionally for her,” LaVera added.

“But that costume was a nightmare to wear!,” the performer admitted. “Originally, I loved wearing it, and thought it was cool. It was exactly what Damien wanted. But wearing it for hours on end, and being covered in blood, water and dirt, gave my body blisters, cuts and bruises. Since it hurt to wear, it’s kind of infuriating how good it looks on screen!,” she concluded with a laugh. 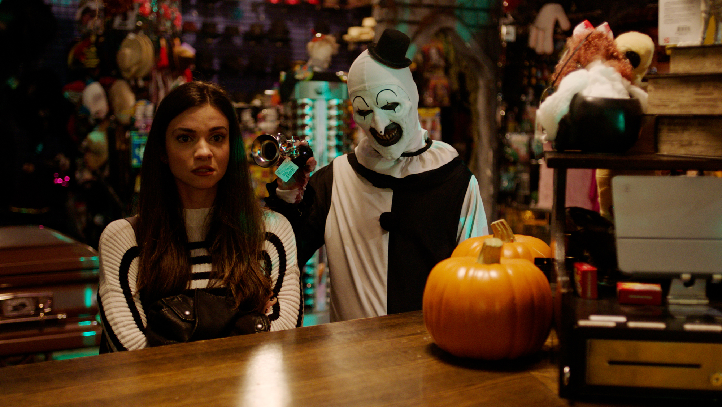