The seemingly most reprehensible villain in a small town can ultimately become the most sympathetic anti-hero, once people truly take the time to get to know them. That’s certainly the case with the character played by veteran genre actress, Lin Shaye, in the new horror film, ‘The Call.’ The drama’s director, Timothy Woodard, Jr., thoroughly worked with the iconic horror performer to create a character who’s initially presented to be the ruthless antagonist. But she’s ultimately revealed to be just so misunderstood that she’s become fragile against the true villains who have wrongfully targeted her over the years.

‘The Call’ opens in theaters and Drive-Ins this weekend, courtesy of Cinedigm. The drama was written by Patrick Stibbs, who also served as a producer on the film, alongside ‘Final Destination’ creator, Jeffrey Reddick. The producer previously collaborated with the helmer on the 2018 horror movie, ‘The Final Wish.’

‘The Call,’ which is set in a small town in the fall of 1987, follows a group of four young friends, including Chris (Chester Rushing), Tonya (Erin Sanders), Zack (Mike C. Manning) and Brett (Sloane Morgan Siegel), are still struggling to overcome tragedies from their pasts. After a confrontation with Edith Cranston (Shaye‘s), who’s widely believed to have been involved in the disappearance of Tonya’s younger sister several years before, the teens are invited by her husband, Edward (Tobin Bell), to visit the couple’s home.

While at the Cranstons’ eerie property, promises each of the friends $10,000-but only if they can survive the night after receiving the title phone call. One by one, the teens’ worst nightmares quickly become reality, which leaves them all fighting their pasts in order to ensure their futures.

Woodard generously took the time recently to talk about directing The Call’ during an exclusive interview over the phone. Among other things, the filmmaker discussed that he became attached to helm the drama after he received the script from Shaye’s‘s manager, and he found the story to be interesting while reading the material. He also mentioned that once the actors were cast, he gave them a lot of creative freedom while they were developing their characters, but he also worked with them to hone certain material for the movie together.

The conversation with Woodard began with him discussing how he became involved in helming the film, and his overall directorial style on the drama. “I received the script around October or November of last year through Lin Shaye’s manager. She told me they had a project they were interested in me directing, because I worked with Lin on ‘The Final Wish.’ We had a really good rapport and relationship, and that movie turned out really well for the both of us,” he shared.

“So they said, ‘We want you to take a read and give us your thoughts, and see if this is something you’re interested in directing,'” the director shared. “I liked the material, and the overall idea; it was something that you’ve heard tales about. It was also extremely interesting because Lin was involved, and I think she’s an incredible actress. We were then making it within a couple of months.”

Speaking of Shaye starring in the movie, she’s featured alongside Bell, Rushing, Sanders, Siegel and Manning. Woodard then delved into what the casting process was like for the film. “I’m always on the go, and a lot of people I work with will tell you that I do everything really organically. So I was heavily involved in all of the casting.

“We had thought about Tobin Bell for awhile. But we waited until pretty close to filming to” actually cast the ‘Saw’ series actor. “But we wanted him, as we thought he was perfect for the role,” the filmmaker divulged.

“Jeffrey Reddick worked with me, the writer (Stibbs), Lin and her manager on crafting things. He helped us with this story, and gave some of the characters a tune-up, to make them feel three-dimensional,” Woodard continued.

“I think the next person who was cast was Chester Rushing, who’s great as Chris. I saw his work on ‘Stranger Things,’ and was a fan. I also produced another movie that he was in, so I really wanted to work with him again,” the helmer also shared.

“The other three (teens) who are around (Chester) are Erin, Sloane and Mike. I watched a lot of tapes from a lot of different actors…and we cast those roles very close” to the start of principal photography, Woodard admitted. “I think it was the day, or two days, before filming began, and I said, ‘These are the people that I want. Let’s see if they want to come in.’ They all did, thankfully, and things worked out great.

“I was heavily involved in the casting, and very happy that we got people who were very different from each other. They were also able to be vulnerable, and you can also like and hate them. The viewer can have a lot of emotions while watching these actors perform,” the filmmaker added.

Once the actors were cast, Woodard enjoyed the process of working with them to build their characters’ backstories and relationships. “My job as the director is to always craft the story, and guide the production along. I always believe in giving my actors a lot of freedom, as I want to see what they do,” he divulged. “Then we start honing it in together from there.

“As far as working with Lin, I had a ton of conversations with her about her character’s backstory ahead of time. She had a tremendous amount of good ideas and thoughts. So we spent a couple of months going back and forth,” the director shared.

“Again, the other actors were cast later, so we had a lot of conversations together on set. I wanted to let them find their ways into their characters, so that it was organic, and they were living the script as it was going along. They were going through the scenes in the moment, and really listening, and I think that comes across in the film,” Woodard added.

‘The Call’ is mainly set in the Cranstons’ home, after the teens were invited there by Edward. The filmmaker then described what the process of deciding where to shoto the drama was like, and working with the movie’s production designer, Markos Keyto, to create the look for all of the film’s locations.

“The challenge was that a lot the scenes were shot in the house. There are also a lot of other locations, like the carnival, the world inside the call and the school,” Woodard shared. “So it was important that we started off by introducing the town through the school, and show how this small town would look in the 1980s…Having (the teens then) walk through the carnival helped set up the mood.

“Then when we knew we were going to be in the house, we searched for a home that had this old school feel to it, as well as a feeling of both class and entrapment. That way, even though the story’s set in this big, open house, you could still feel entrapped there,” the helmer noted.

“So we were really lucky to find the location where we shot, and the owner is amazing,” Woodard gushed. “The house is beautiful, and has a lot of hand-crafted stuff. The double doors don’t have handles on the inside,” which helped add to the house’s aesthetic. “It was a dream to have a location like that. The art department, including (art director) Karo (Méndez), then came in and made the house even more eerie.”

With Cinedigm distributing the drama in theaters and Drive-Ins this weekend, the director appreciated having the opportunity to have a theatrical release, especially during the current COVID-19 pandemic. “As a filmmaker, a theatrical release is a dream come true. You spend a lot of time making a film; you shoot it for over a month, and then spend six or seven months in post (production). So you want it to have a release on a big screen where people can see it.

“I think right now, during the pandemic, it’s an important time to support local theaters, and give them product to drive people in. So we were extremely happy to have this opportunity to do that, and have our film played, and hopefully find an audience, and give them a little bit of entertainment for an hour-and-a-half to escape everything that’s going on in the world,” Woodard concluded. 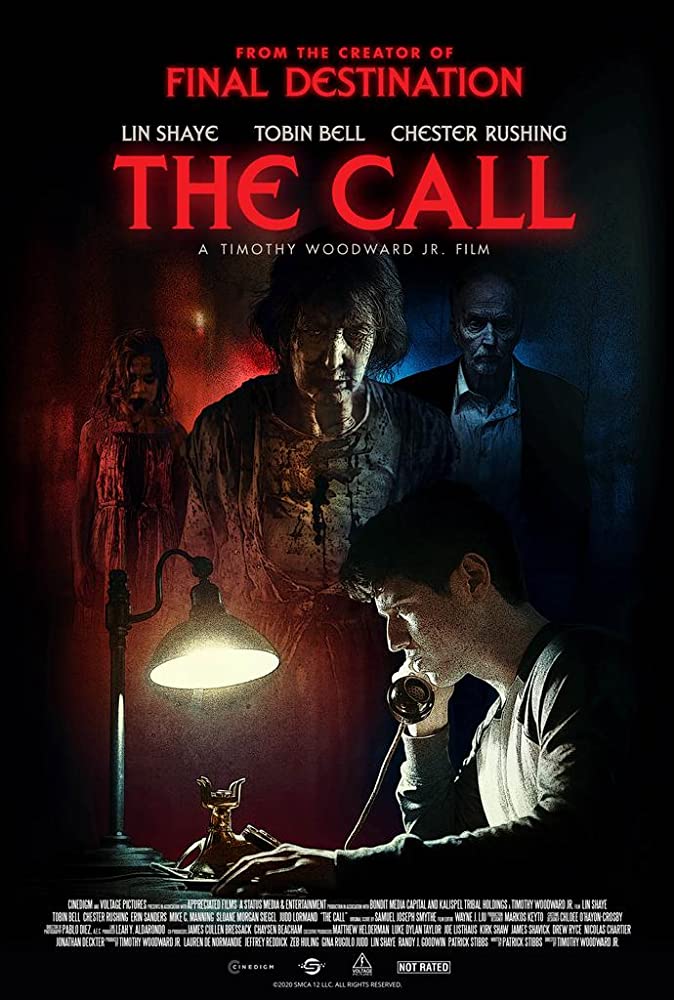