Mustering the courage to emotionally contend with both new and long-buried physical injuries and obstacles can be a mentally daunting task. Struggling to overcome those wounds can be even more challenging when you painfully discover that they were caused and/or kept hidden by the people who are supposed to love and take care of you. The new horror film ‘Jack Goes Home’ is a gripping and enthralling exploration into the disastrous consequences that occur when a victim determinedly sets out to uncover and mend the situation that caused them pain in the first place.

‘Jack Goes Home’ follows the title character (Rory Culkin), who is an educated and well-versed magazine editor who’s living in Los Angeles with his girlfriend, Cleo (Britt Robertson), who’s pregnant with their first child. Grappling with the natural release of his childhood and the promise of his forthcoming adulthood, he is hit hard by the news of his father’s death. In a violent and horrific car crash, his father has perished while his mother, Teresa (Lin Shaye), has survived. He returns to his hometown of Denver to nurse his mother through her physical and emotional injuries. During his stay at home, with the help of his childhood best friend, Shanda (Daveigh Chase), he uncovers long buried secrets and lies within his family history, his friends and his very identity. Jack’s journey to the truth is fueled by madness, sexuality, hauntings and violence. For Jack, there truly is no place like home.

Dekker started the Q&A by mentioning that he has “written 11 films, and have directed a lot of music videos and shorts.” Unlike some of his previous projects, “this film was the one that I wasn’t actually purposefully trying to draw on any influences. But as each artist makes a film, I think they subconsciously draw from one that they innately love.”

The writer-director also noted that he’s “an open book” when it comes to discussing the people and experiences that have influenced his work. “My father passed away in 2010, when I was 22-years-old, and he was 83-years-old. He suffered from Alzheimer’s for 11 years. I took a year to nurse, and take care, of him. He was my world, my idol and my everything.” Dekker emotionally added that when his father died, “I didn’t realize what a plummet into depression that I was heading into. I knew at the time, though, that I wanted to make a film about that.”

The filmmaker then drew some laughs from the audience when he added his mother is still alive, and insisted that she’s nothing like Shaye’s character in the movie. The actress nervously added, “I hope I never meet your mother.” Dekker then explained that the performer “is scared to meet my mother.”

‘Jack Goes Home’ wasn’t immediately put into production after Dekker started thinking about making the film, as he didn’t want to make a self-serving sob drama. “But years later, I thought, what if I take all of that anguish, pain and put it into a thriller? I can make something that people may be disturbed by,” the filmmaker revealed. “Once that light bulb went off, I wrote it in three weeks. I then sent it to (producer) Scott (Levenson), and he read it the next day. Then (producer) Jordan (Yale Levine) read it. About two weeks later, we had production up and running.

Shaye was then asked about the process of filming an intense scene she had with Culkin, in which their characters were discussing the death of Jack’s father. “This was a particularly difficult challenge, for a lot of different reasons,” the actress admitted. “I had a shorter amount of time than usual to prepare for this particular role. The monologue I gave in that scene burned a hole in my brain. That was what made me really intent on doing the role.”

Dekker revealed that that scene between the mother and son was his favorite one in the entire horror film. “That was the crux of the film. I was also fortunate enough to have two actors like Lin and Rory, who could actually stay in one take. We didn’t have any coverage, because we had two actors who were capable enough to carry that take.”

Shaye also emotionally revealed that playing Teresa still really affects her. “There’s something about the way it was written, and of course, the content itself is so harrowing and disturbing. If you have ever experienced something like this, the story seems to penetrate on some level,” the actress explained. Since she felt the story went so deep, “I allowed myself to go there. If the audience feels that, I must have succeeded. I’m very hard on myself when I watch my own work.”

Dekker then graciously discussed some of revealing and important details and plot points he included in ‘Jack Goes Home.’ The filmmaker explained what his motivation were behind including the disturbing dreams Jack experiences, which is one of the key elements and motivations in the horror film. The dreams helped the character realize he suffered from abuse when he was a child.

“I’ve spoken openly about this, and the abuse element was truth, for the most part,” the filmmaker commendably revealed. “It’s a twisted, magnified truth, but it was something that happened to me as a child. I discovered it within the final months of my dad’s life.”

The writer-director added that “The dream element was about how you can lose your way,” as well discovering what’s real when you’re in that much pain. “That’s really what this film is about,” which he revealed reflects his “worst nightmare. I’m happy to have shared that with all of you,” Dekker also said, which helped ease the tension of the serious subject matter, and garnered laughs from the audience.

“As an actor, I didn’t play it as a nightmare,” Shaye admitted. “I played it as the reality of my life. Thomas so gracefully led us through. He allowed us, particularly me, to explore my own nightmare through his nightmare.”

The actress also admitted that she was “still in a daze, as I haven’t seen the movie before; this was the first time I have seen it. So I’m in a little bit of shell shock myself.” Shaye, who then revealed she was emotional about seeing the final version of the film, added that it brings about some recognition to “the places we all have to visit…Thomas made me visit some of mine.” The actress garnered laughs and a round of applause from the audience when she added, “So I don’t know whether to thank him or kill him!”

The poetry of the material on the page was very apparent,” Shaye added. “What was wonderful for me was to see the poetry of the language came alive visually in the film. It’s obviously very abstract, and there’s no linear story that gets told. You have to follow it with your heart and emotions, almost more than with your mind. So congratulations,” the actress said to Dekker. The filmmaker humbly responded by saying, “My ego’s about to explode the entire building!”

Dekker ended the Q&A by noting that everyone on the set “really cared about the material…There was also a light and friendly atmosphere. But when it needed to be an oppressive atmosphere, there was, especially with Rory.” The director added that he “would also blare this really upsetting music, in order to get into the zone. But overall, I think we all had a good time.” 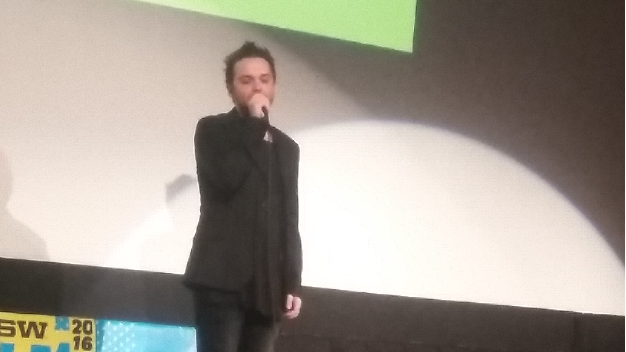 Writer-director-producer Thomas Dekker introduces the world premiere of his horror film, ‘Jack Goes Home,’ during the Midnighters Section of SXSW 2016. 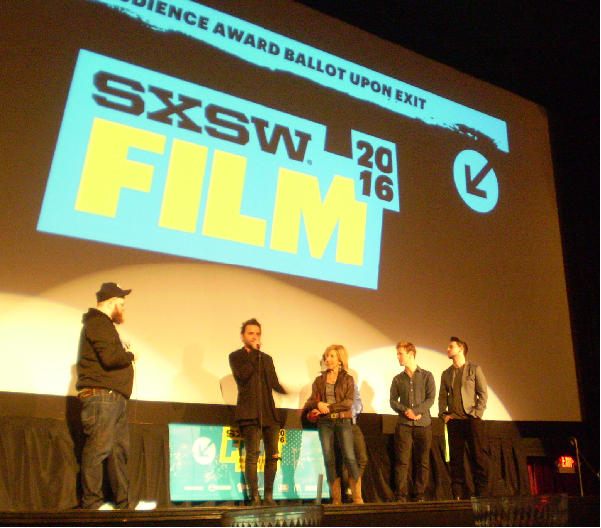