The undead are being revived again, as Universal Studios Hollywood is set to open an all-new year-round attraction in Summer 2016 that’s based on AMC’s hit horror thriller series. The Emmy Award-Winning show will be featured in a permanent residency at The Entertainment Capital of L.A.

The news of the all-new immersive, cutting-edge attraction was revealed during an exclusive announcement made by Chris Hardwick on Sunday night’s episode of ‘Talking Dead.’ The revelation of the permanent attraction was made after ‘The Walking Dead’ scared fans for years as a signature Halloween Horror Nights maze. The newly enhanced permanent venture will turn the highly sought-after seasonal, limited time experience into an authentic 365-day opportunity.

To further elevate the authenticity of the new walk-through attraction, Universal Studios Hollywood is partnering with ‘The Walking Dead’s’ creative team, including visionary executive producer and director, Greg Nicotero, and his special effects company, KNB Efx. Nicotero’s team, which is responsible for creating the drama’s realistic decaying walkers, will construct prosthetics, utilize original molds and apply paint and detailing to the attraction walkers.

“‘The Walking Dead’ is a phenomenon that has successfully and consistently affected the psyche of viewers on a global basis, since its debut,” said Larry Kurzweil, President of Universal Studios Hollywood. “We’re taking its intensity to the next level by collaborating with the show’s award-winning production team to create an authentic living representation of the series that can only be experienced at Universal Studios Hollywood.”

“We’re so grateful for our longstanding partnership with the talented team at Universal Studios Hollywood. We’ve shared a successful three-year partnership at Halloween Horror Nights and now this permanent ‘The Walking Dead’ walk-through attraction takes the relationship and the fan experience to the next level,” said Charlie Collier, President of AMC and SundanceTV. “Along with our great partners at Universal, it means a great deal to us to continue entertaining-and frightening-passionate, loyal fans of ‘The Walking Dead’ for years to come.”

The ‘The Walking Dead’ attraction will be located within an entirely new, custom built structure, situated within an expansive building complex just inside the theme park’s main entry. Due to the intense nature of this experience, the attraction is not recommended for guests under the age of 13. 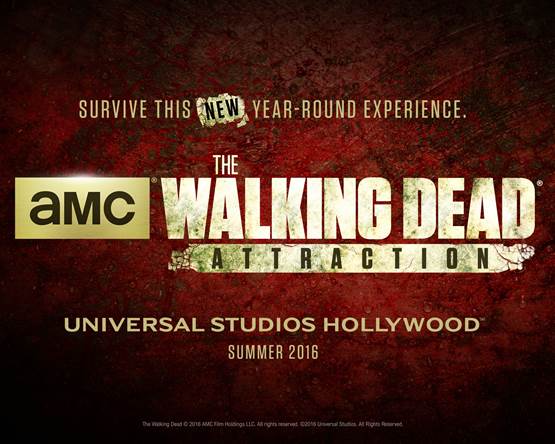