Some people are drawn to the idea of pursuing their dreams at any cost, until reality sets in and they begin to realize the situation they’ve gotten themselves into has become a nightmare. That’s certainly the case for the anti-hero of Jason Derek Brown, an elusive, real-life fugitive who’s been on the FBI’s most-wanted list since he committed his crimes in the early 2000s, in the upcoming crime drama, ‘American Murderer.’

Saban Films is releasing the thriller in theaters this Friday, October 21, and then On Demand and On Digital the following Friday, October 28. ‘American Murderer’s official distribution comes after the feature had its U.S. Premiere during the 38th Boston Film Festival at Regal Cinema Fenway on September 24. While at the festival, the movie won the awards for Best Actor for Tom Pelphrey for his portrayal of Brown and Best Music for composer Scott Gentile.

‘American Murderer’ is based on the true story of the life of Brown, a charismatic con man turned party king who bankrolls his luxurious lifestyle through a series of scams. On Brown’s trail is Lance Leising (Phillippe), a dogged FBI special agent who’s determined to put the con man behind bars. When Brown’s funds run low and his past catches up with him, he plots his most elaborate scheme yet, pitting himself against Leising in a deadly game of cat and mouse — and becomes the most unlikely and elusive fugitive on the FBI’s most-wanted list along the way.

Gentile generously took the time to talk about scribing, helming and producing ‘American Murderer’s following its U.S. Premiere screening at the Boston Film Festival during a post-screening Q&A. Among other things, the filmmaker discussed that he was inspired in part to make his feature film directorial debut with ‘American Murderer’ because he’s been interested in the details of Brown’s case since it occurred in 2004, and wanted to explore how the fugitive still hasn’t been caught, 18 years after he crimes his committed. The filmmaker also praised Pelphrey’s natural ability to bring his character’s true personality to life throughout the drama’s production.

The Q&A began with Gentile explaining how he came across Brown’s story, and how he was able to adapt it for the screen. “The process took about five years. Before I wanted to become a filmmaker, I wanted to be an FBI agent. As a kid, I was obsessed with the FBI’s Top 10 fugitive list. At 14, I thought I could help them catch the fugitives,” he shared.

“Jason Derek Brown was put on the fugitive list in 2004, when I was around 14-years-old. I remember his face from the list. The FBI’s Top 10 fugitives are pretty menacing, but then this surfer dude appeared on the list,” the writer pointed out.

“Then cut to about 14 years later, I was just out of film school, and I was trying to figure out what my first feature would be. I was struggling to figure that out and get it off the ground,” Gentile noted.

“In film school, I was always storyboarding, and had true crime documentaries on in the background. Then all of a sudden, Jason’s face pops up on the television, and I just remembered it from when I was a teenager; it just came back,” the filmmaker recalled.

“I thought, that guy’s still missing? So I started to watch his story, and thought my first feature should be about this guy,” Gentile revealed.

“But I thought maybe I should just sell it as a script, as it may be too ambitious for a first-time filmmaker. I’ve made shorts before, but this is my first feature,” the writer explained.

“So we went out and made a proof-of-concept short, and garnered the interest of these incredible producers who are here with us tonight, including Gia Walsh. They backed me…and gave me the incredible opportunity to make this film,” Gentile continued.

“They helped me through the development process, during which they really helped me as a screenwriter. During pre-production, production and post-production, they helped me with the directing. So I was really impressed with them all,” the filmmaker gushed about his fellow producers.

“The feature really got off the ground through the casting. I was really lucky with the actors we cast, but the process was challenging; we started casting in March 2020, so it didn’t seem like ideal timing to finish the script and start to get ready to go,” Gentile admitted about starting to cast ‘American Murderer’ during the beginning of the COVID-19 lockdown throughout the U.S.

“But the producers stuck by me and cast all of these great actors. We got a cast that just exceeded my wildest dreams of what could be possible,” the scribe admitted.

“When it came to Tom Pelphrey, who’s known for his role on ‘Ozark,’ Gia, my producer, asked me in April 2020 if I was watching ‘Ozark.’ I said: ‘No because I’m an idiot.’ So she said: “Well, watch it now because this guy’s amazing,” Gentile revealed.

“Tom coming on helped get the rest of the cast, like Jackie and Ryan. I don’t think they would have been available at any other time, but at that point, everyone was at home and wanted to get back to work,” the writer revealed with a laugh.

“These actors took a chance on me as a first-time feature director. People aren’t running to give first-time directors a job,” Gentile admitted. “So this was a really special project that was a result of really hard work and luck.”

“There is a responsibility to telling a true story. This movie is based on a true story, but there are also elements of fiction; we call it true story fiction,” Gentile divulged. “There was a ton of research that went into the project. I read everything I could get my hands on, and watched every documentary that I could.

“So there were a lot of fascinating tidbits that I found, but ultimately, when you’re making a movie, you have to change things, so that you can get every emotion. Most of the time, true stories don’t play out the way they do in films,” the director explained.

“The screenplay went through an evolution. I worked on it a little bit by myself, and then these producers came on and worked with me during this extensive development process. By the end of it, the script was really developed,” Gentile added.

“We really worked on the characters’ relationships because for me, movies are about relationships. What made me think that this could be a cool crime film, which is what I love and had to make, is that the story is all about family; that’s the main theme of the film,” the filmmaker explained. “As a result, I did take a lot of creative liberties, as this isn’t a documentary; it’s true crime fiction.”

Gentile then delved how Pelphrey prepared to play all facets of Brown after he was cast in the film. “Tom’s very smart and perceptive, and understood the script very much. Our first meetings indicated that he knew the role, so I really wasn’t too concerned about how he would approach playing the character,” the helmer revealed.

“I believe that when you cast great actors, you get out of their way. I don’t believe in going up to them and asking, ‘What’s your motivation?,'” Gentile shared.

“We finished casting the movie by the end of the summer of 2020, and began filming by the end of that year,” the filmmaker divulged. “For a few months there, Tom and I had a lot of Zooms. I said, ‘Let’s do a Zoom and we’ll read the lines. I’ll take out all the action lines in the script, and we’ll just read the dialogue,'” he added.

“So we read the lines and did a lot of talking and asking questions of how things related to each other. By the time we got to set, Tom was so prepared,” Gentile noted. “It was incredible to see because you want your actors to come in prepared.

“He added so many things, too. Some of the best lines came from him as he was improvising,” the filmmaker shared.

“Working with the cast was a dream. When Idina came in to shoot her scenes for about a week, it was great. But when the week ended, she gave me a hug, said goodbye and we took a picture. She ten left and tested for COVID, and it came back positive,” the director revealed.

“So the producers told me to go back to my hotel room and they would call me later. At that point, I thought, I made it through week one of my movie, and we’re going to shut down,” Gentile recalled.

“So I sat down in my hotel room and looked at phone. I finally got a text that said, ‘It’s a false positive, so we’re coming back to work tomorrow.’ I then laughed and cried,” the filmmaker added.

“That was the only big scare we had, and everything was safe after that. Kudos to my producers for running a super safe set,” Gentile also shared.

During the making of ‘American Murderer,’ Gentile didn’t consult with Brown’s family or the FBI on the case. “I didn’t speak to the family because I didn’t want my take to be influenced by their point of views. But I did a lot of research into public domain information about Jason Derek Brown. I did interview some people who were composite characters,” he shared.

“We also didn’t make the movie with the FBI. But Jason’s no longer on their Top 10 Fugitives list, as of (mid-September),” the helmer also revealed.

“However, I did work very closely with a detective. If you’ve ever seen ‘Alpha Dog,’ he arrested Jesse James Hollywood (who inspired Emile Hirsch’s character, Johnny Truelove, in the movie). He was a consultant on this film,” Gentile shared.

“He helped with all of the police and FBI elements. He read the script about 70 times and consulted on scenes like the squad invasion, as we wanted to be as authentic as possible. But at the same time, we made stuff up, as that’s what you do in movies,” the filmmaker added. 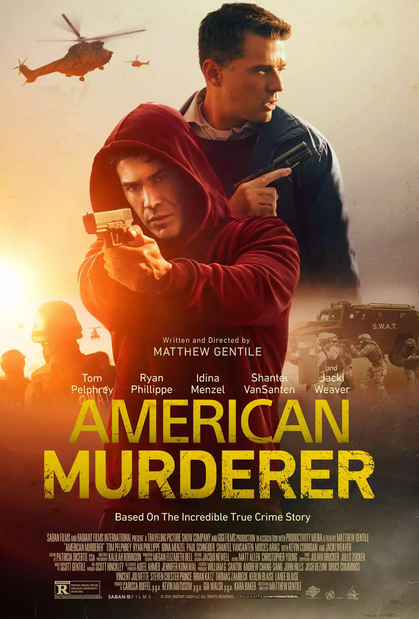