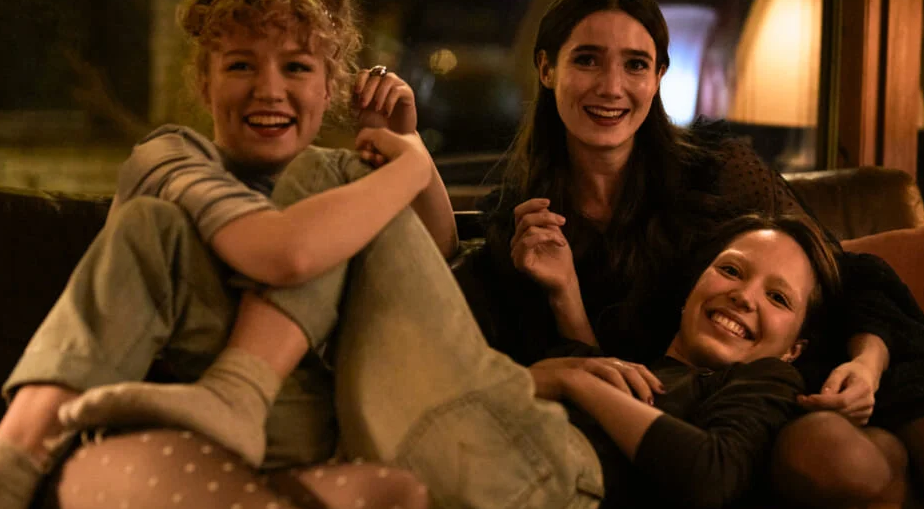 Society isn’t typically kind to those who are different, but there are also those who single themselves out and choose that path willingly. They could easily fit in and acknowledge that others receive them well, but instead opt to stand apart because either they have no interest in being seen as ordinary, they feel they are unique, or they remain in perpetual pursuit of perfection. Girl Picture follows three such characters as they struggle to find themselves in a stirring and wondrous depiction of teenage friendship and relationships.

Mimmi (Aamu Milonoff) and Rönkkö (Eleonoora Kauhanen) are best friends who work together at a smoothie bar at the mall. Mimmi lives on her own as a result of a fractured and distant relationship with her mother who has another family. She frequently lashes out at other people, and after an uncomfortable first meeting with Emma (Linnea Leino), a committed skater, the two bond and start a passionate romance. As they begin to see the influence they have on each other, Rönkkö explores her own attractions, struggling to find sex satisfying and to determine exactly what she needs to make her happy.

Girl Picture, which is Finland’s official Oscar submission this year for Best International Feature, is a film that feels remarkably lived-in and authentic. It leans fully into fleshing out its characters, showing the highs and lows of their dynamics and rooting for their happiness while telling an honest story. It also deals with the overall difficulties of being a teenager and delivering on societal expectations while steering refreshingly clear of the pervasive cruelty that is all too rampant among those who deem to judge others for being different. Mimmi in particular isolates herself, lashing out violently at another student during gym class as an apparent show of dominance, something she also attempts when she first encounters Emma as a customer at the smoothie shop, only to be immediately rebuked as rude by the far less confident Emma, who later describes her mother as her best friend.

It’s fascinating to see the contradictions inherent within these three characters and how they complicate their journeys. Mimmi shows a sincere love for her much younger stepbrother yet is easily thrown off by her mother’s inability to actually see her, mistakenly believing that she is truly content living on her own without any regular parental supervision. Emma has tremendous talent but gets in her own head, to the point that she becomes her own worst enemy when she starts to think that she cannot pull off her signature move during a crucial competition. Rönkkö is cheerful and bold in her efforts to find someone she likes, but she’s also mesmerizingly skilled at sabotaging a flirtation by choosing bizarre and uncomfortable conversation topics that provoke perplexed reactions from her prospective partners.

Girl Picture contains three formidable performances from talented young actresses with few credits to their names. All three main characters undergo transformations as they realize things they didn’t know about themselves over the course of the film, and it’s riveting to watch them connect with one another and to struggle to overcome deep divisions that emerge. Milonoff, Kauhanen, and Leino are all absolutely worth watching given the extraordinary work they do here to truly make these characters feel alive and vibrant, yet just as flawed and imperfect. Director Alli Haapasalo guides a sensitive and three-dimensional story from screenwriters Ilona Ahti and Daniela Hakulinen that feels accessible, realistic, and compelling. Seeing its Finnish title, Tytöt tytöt tytöt (which translates to girls, girls, girls), stamped across the screen at its start sets the tone for a film that’s both fun and resonant, easily one of the best international imports of the year.