Launch of the Candidates! 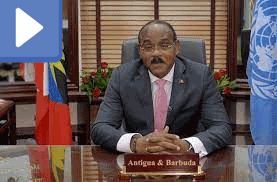 “We have determined a way forward on a decades-long conversation on funding for loss and damage – deliberating over how we address the impacts on communities whose lives and livelihoods have been ruined by the very worst impacts of climate change.”

Browne said his country as well as the Alliance of Small Island States (AOSIS), which he chaired, were involved in the negotiations in Egypt and had even addressed one of the negotiating meetings.

“I had asked them to look at the issue of loss and damage objectively. Look at it from a standpoint of justice…small island states require climate justice.

“I also said to them the idea that no money is available to cover loss and damage that is not so and that has been one of the issues that John Kerry (The US Special Presidential Envoy for Climate) has promoted for the last couple of years.”

Shockya will be bringing news on Kerry soon.