The Biden administration along with its derelict leader is using the automotive industry as another means of deceit to fool the American public for its own economic benefit. The president is working with automakers to promote their own greedy nature. They’re pushing Americans into spending tens of thousands of dollars unnecessarily for electric vehicles, which they falsely assert curb oil use and fight climate change. This is a complete hoax.

Experts are calling out the government and automakers for not disclosing how plug-in vehicles have huge environmental impacts, even more so than cars fueled with gasoline. Electric cars sold today indirectly produce planet-warming emissions, depending on much coal is being burned to charge them. Electric grids also aren’t as clean as they need to be in order to make electric vehicles truly emissions free.

If electric cars are charged on a coal-heavy grid, such as those currently found in the Midwest, they are actually be a bit worse for the climate than traditional vehicles.

“Coal tends to be the critical factor,” said Jeremy Michalek, a professor of engineering at Carnegie Mellon University. “If you’ve got electric cars in Pittsburgh that are being plugged in at night and leading nearby coal plants to burn more coal to charge them, then the climate benefits won’t be as great, and you can even get more air pollution.”

On top of coal burning pollution, most of today’s electric cars use batteries with toxic raw materials, including cobalt, lithium and rare earth elements, that also seriously pollute the environment and ignite human rights concerns. That’s a major concern in the U.S., as only about five percent of lithium-ion batteries are recycled; the remaining 95 percent that aren’t recycled can leak metals into the ground and air. 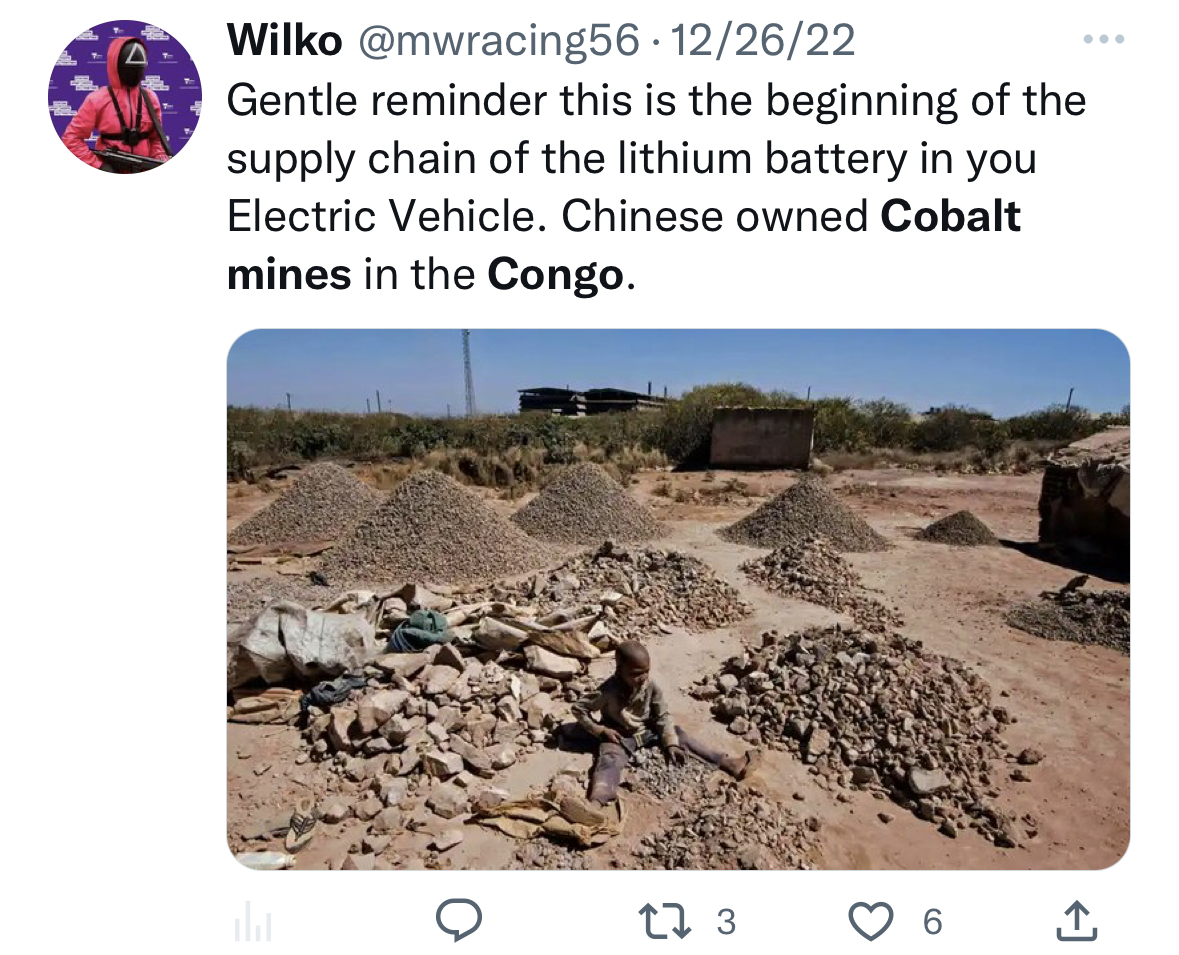 Siddharth Kara, a visiting professor at Harvard and modern slavery activist, has exposed the appalling cobalt mining industry in the Congo on a recent episode of ‘The Joe Rogan Experience’ that went viral. The professort told the podcaster that “there’s no such thing as clean cobalt. That’s all marketing,” Prof Kara said.

Prof Kara also told Rogan that the level of suffering of the Congolese people working in cobalt mines was astounding, and the cobalt mine in the Congo rely on child labor or slavery. He added that the reasoning for that is that the demand for cobalt is exceptionally high.

“Cobalt is in every single lithium, rechargeable battery manufactured in the world today,” the professor explained. So every electric vehicle needs the mineral.

But “by and large the world doesn’t know what’s happening” in the Congo, Prof Kara added. In response, Rogan said: “I don’t think people are aware of how horrible it is.”

The derelict Biden administration recently entered into an agreement with the Democratic Republic of the Congo and Zambia to bolster the green energy supply chain, despite the Congo’s heavily documented issues with child labor. As a result, the Congo has became the center of a geopolitical conflict over valuable minerals.

Besides f*cking over the citizens of the Congo and Zambia to cheaply secure cobalt for its own personal benefit, the Biden administration is also working with the electric vehicle industry to continue manipulating Americans. Biden’s administration has issued a guidance that encourages Americans to buy certain electric cars that are eligible to receive tax credit for car dealerships.

Biden proved he doesn’t care about American consumers when he signed a new law in August. The law allows dealerships to qualify for a commercial clean vehicles credit of $7,500 for regular consumer electric cars if they convince consumers to lease the cars, instead of purchase them.

Sen. Joe Manchin, D-W.Va., who played a large role crafting the electronic vehicle tax credit requirements, even slammed Biden’s new law, as he argued that it would allow companies to exploit loopholes. So he proclaimed to help protect the American people by writing a new legislation during the upcoming Congress to clarify the intent of the law.

“The information released…outlining how they will be implementing the commercial and consumer EV (electronic vehicle) tax credits bends to the desires of the companies looking for loopholes and is clearly inconsistent with the intent of the law,” Manchin said. “It only serves to weaken our ability to become a more energy secure nation.”

So Joe, instead of a ridiculous tax credit, how about provide funding to the energy sector to make clean and renewable energy and insure rare minerals are not being mined by children in third world countries.