Ghost Rider is based on the Marvel comic book of the same name; it is the story of Johnny Blaze a motorcycle stunt rider who makes a deal with the devil to save the life of someone very close to him. The only catch is that the deal is for his soul. When itâ€™s time to cash in Johnny Blaze is transformed into the Rider, and whenever nightfalls and evil is present he will become the Rider. Changing into that of a flaming skeleton he rides his motorcycle and uses spectacular powers to battle evil.

With stunning visual effects itâ€™s no wonder this movie was #1 for so long. The story was very well written and very true to the comic book. Watching the transformation of Johnny Blaze into Ghost Rider for the first time was wonderful, and adding Peter Fonda as the devil was fantastic, I donâ€™t think any other actor could have done such a convincing job for this movie. Nicholas Cage also did a great job playing Johnny Blaze.

Receiving Three Skipped Beats on the Roger Moore movie scale, Ghost Rider is an instant comic book classic. With a story line that is only surpassed by its amazing visual effects it will definitely make itâ€™s way into my collection. 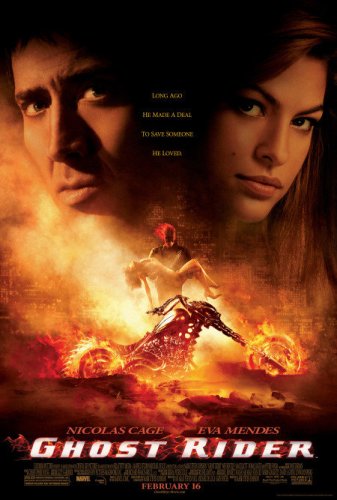