The very jokey forthrightness of its title, “Gangster Squad,” evokes a kind of disposable pop-art mash-up of “The Untouchables” and “L.A. Confidential,” but with the seriousness of an old Saturday morning serial, and that’s just what director Ruben Fleischer’s rendering of screenwriter Will Beall’s period piece crime drama achieves. No thunder-clap piece of cinema, this, but instead a square-jawed movie that more or less works to the degree that one watching it is wishing to be entertained at that very moment and only that moment in time, “Gangster Squad” is a good-looking showcase for a lot of actors who have in the past done and will do much more nuanced and interesting work down the line.

The story, rooted in some modicum of truth, unfolds in post-World War II Los Angeles, where a straight-arrow veteran, John O’Mara (Josh Brolin), finds himself recruited by Police Chief William Parker (Nick Nolte) to lead an off-the-books team of specialists tasked with taking down an ambitious and bloodthirsty ex-boxer turned gangster, Mickey Cohen (Sean Penn, dialing it up a notch), who has designs on opening a lucrative gambling wire service. Cohen has judges, some higher-up cops and other beneficial parties already all in his pocket and on the take, so O’Mara rounds up the rakish and cynical Jerry Wooters (Ryan Gosling), sharpshooter Max Kennard (Robert Patrick), a brainy guy (Giovanni Ribisi) and the two requisite ethnic types (Anthony Mackie and Michael Peña, sorely underused), and starts busting down doors, making life difficult for Cohen’s operation. Fisticuffs, car chases and shootouts ensue, with things additionally complicated by Jerry’s burgeoning yet still secret relationship with Grace Faraday (Emma Stone), Mickey’s etiquette tutor (!) and not-very-committed girlfriend.

O’Mara isn’t much for tactical subtlety; his approach is all-frontal assault, all the time, which kind of mirrors the movie’s goofy, anything-goes-in-the-name-of-entertainment philosophy, where torrents of misplaced cover fire evoke flash-forward memories of 1980s actioners that give “Gangster Squad” a weird hybrid contextualization. It’s a period piece set in the 1940s but very much paying homage to ensemble buddy action flicks of a different era.

What helps distinguish “Gangster Squad” is its sense of humor. Beall, a former police officer turned screenwriter (he’s now working on “Justice League” and a reboot of the “Lethal Weapon” franchise, so enamored of his efforts on this was Warner Bros.), writes winkingly self-conscious noir-style dialogue, in which redheaded gals are “tomatoes” and all the men talk about how they didn’t Come Back From The War to let their city turn into the sort of hell-hole Cohen is turning it into. There are a couple fun sequences involving a botched raid, a jailbreak and the planting of a bug device in Cohen’s home. So the movie eschews moral murkiness in favor of programmatic conflict and slick gamesmanship. What’s the big deal, right?

The issue is the characterizations are so thin and its main conflicts and resolutions so familiar, right down to the dialogue exchanges that doom various supporting characters, as to invite mental check-out. And when “Gangster Squad” has to pivot into meatier dramatic terrain, especially in its final act, that’s a problem. Most of the actors, then, lean back into tough-guy posturing and rawhide-chewing, almost like they’re doing a radio play. Notable exceptions are Mireille Enos (“The Killing”), as O’Mara’s pregnant wife Connie, and Gosling, who locates layers of sardonic remove and bubbling-to-the-surface inner decency and conflict in Jerry.

“Gangster Squad” isn’t terrible, really. In fact, it’s quite watchable for most of its running time. Cinematographer Dion Beebe and production designer Mather Ahmad craft an appealing look for classic-era Los Angeles. The vehicle, however, isn’t a classic. A bit of a tonal mish-mash, it’s a lowered stock car in need of a tune-up and a couple fresh coats of paint. 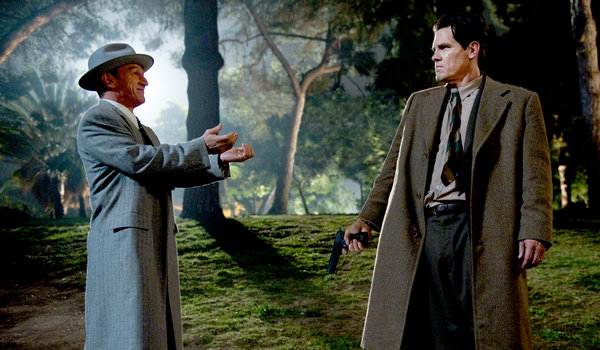