A solid, smartly wound little psychological drama that digs into the knotty qualities of mid-life adult relationships, when old acquaintances best left forgotten can drift into a life and bring unexpected turmoil, writer-director John Daschbach’s “Brief Reunion” is a spare but engaging examination of personal character, and the vacillating nature of right and wrong.

The ordered, bucolic, rural New England existence of Internet entrepreneur Aaron (Joel de la Fuente) and his wife, Leah (Alexie Gilmore), starts to unravel when an old college classmate, Teddy (Scott Shepherd), shows up. Prior to his arrival, Teddy has tried to befriend Leah and others online — a sign that prompts a couple of Aaron’s friends to advise a strict “zero tolerance” policy of non-engagement. Teddy is, it turns out, is a morally dubious and socially awkward hanger-on, the proverbial turd in the punch bowl.

But Teddy runs into Leah and her mother in the grocery store, and he worms his way into Aaron’s birthday party, where he brings along his girlfriend, Simone (Kristy Hasen). It doesn’t end with one uncomfortable evening, however. Soon Teddy is popping up at Aaron’s work, and posting online old photos that Aaron would rather he not. Hinting that he knows about a dark secret related to the success of Aaron’s initial web venture — something that Aaron himself is uncertain of — the resentful Teddy tries, in his own passive-aggressive way, to re-litigate the past and pry some money for an investment opportunity from his old acquaintance. Arguments and threats ensue, and a woman (Francie Swift) from Aaron’s past pops up as well.

Unlikely as it seems, “Brief Reunion” tangentially recalls Lawrence Kasdan, actually — “The Big Chill” by way of “Dreamcatcher,” maybe, minus any science-fiction. It’s on the surface quite different than those films, of course — more streamlined, and not as chatty. But its interest in the gap between hidden and stated feelings, and how that distance swells or contracts accordingly, based on company, is the same as Kasdan’s. Daschbach’s focus is more tightly trained on a single, collapsible dilemma, but he’s interested in the human condition. To go into much further detail would ruin some of the movie’s twists and turns, but when one character spits, “I’m not going to prison for that [person],” it reveals how often scruples are dependent on extra variables, and not some fixed absolute.

The low-budget “Brief Reunion” is spare but attractive in its construction. Daschbach and cinematographer Joe Foley settle on a muted color scheme and stark lack of extras that complement the movie’s slowly ratcheted up claustrophobia, while still finding some ways and moments (insert shots, outdoor sequences and a scene against the backdrop of fireworks, for instance) to give their movie some production-value pop.

Daschbach’s cast also turns in solid performances; especially noteworthy is Shepherd, who captures the weasely nature of a guy whose misreadings of personal space and connection goes beyond confounding and into the realm of borderline pathological — to the point that dealing with him arrests and erodes one’s sanity.

The phrase “character study” gets bandied around a lot. Decades ago this movie might have been the type of major studio release new talent cut their teeth on before tackling some highbrow genre offering or literary adaptation. Now “Brief Reunion,” in its uncomplicated complicatedness, is the type of film Hollywood has mostly ceded to independent filmmakers. That is of course a fairly unfortunate thing on many levels. Daschbach, though, makes it seem not so bad, at least for an hour-and-a-half.

NOTE: “Brief Reunion” opens this week in Los Angeles exclusively at the Laemmle NoHo 7. For more information on the movie, including other playdates and venues, visit www.BriefReunion.com. 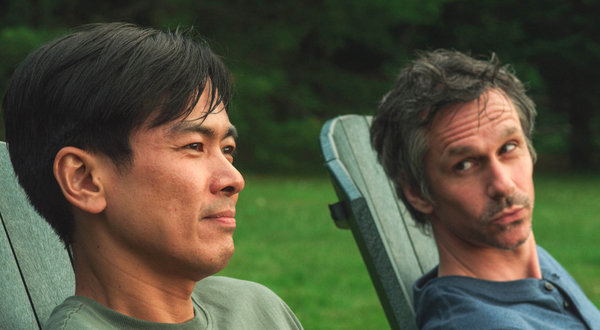