This movie was one of the first screened for press members at the Sundance Film Festival, but it’s probably fair to say that it may be the strangest entry of the year. Director Sebastián Silva, whose last film, The Maid, took home a Grand Jury Prize at Sundance several years ago, has created a film so truly bizarre from its opening moments that it’s hard to imagine just where it will end up. As promised by the stylized, decorative opening credits sequence, Crystal Fairy is a wild ride that can best be described as a Chilean road trip stoner movie starring none other than authentic awkward American Michael Cera.

Silva directed and wrote the film, which stars brothers, Juan Andrés, José Migeul, and Agustín as cinematic siblings traveling with Cera’s Jamie across Chile with the express aim of finding a San Pedro cactus, which becomes highly hallucinogenic when cooked and drunk. The road trip gets an unwanted addition when Jamie, bragging about the amount of coke he has done at a party, invites Crystal Fairy (Gaby Hoffman), a peculiar soul first seen dancing maniacally, along. When Crystal calls while Jamie is on the road, dramatic music plays and he hangs up the phone immediately. Yet, as the film’s title indicates, Crystal Fairy cannot be ignored, and she becomes the defining part of the young men’s trip.

Those unimpressed with Cera’s historical lack of versatility will find a familiar Cera at the center of this film, albeit one with a mean streak not quite possessed by any of his former characters, except possibly his evil alter ego in Youth in Revolt, though he at least delighted in being cruel. Jamie is immediately self-centered when he first appears on screen and spends much of the film trying to convince others to ignore their desires and pursue his instead. He shows a particular lack of humanity to Crystal, whom he dubs “Crystal Hairy” after she emerges from the shower wearing nothing but a towel on her head and proceeds to spend the next five minutes conversing while naked.

Crystal, on the other hand, is a magnificent free spirit. Her sense of self is entirely unique, and she prides herself on not conforming to society and instead striving for serenity and happiness at each juncture. Her European grooming sensibilities irk Jamie and puzzle the Chilean brothers, and her emphasis on the power of spoken healing produces similar results. Crystal is an enigma, one whose motivations and mood can be swayed at any moment, but whose primary goal in life is the same, and, for the purpose of the film, is always at odds with what Jamie wants to do in the moment. In their pursuit of the cactus, they experience precious few moments of bonding and instead grow distant as Jamie obsesses over finding it and dismisses Crystal’s desires as irrelevant. Inevitably, however, they both succumb to its effects, which results in a delirious but focused high that steers the film on an entirely new course.

Crystal Fairy is a comedy, one that will have different appeals for different audiences. Those that find Cera amusing will – and did quote loudly, at the Sundance press and industry screening – laugh at his every mannerism and movement, while others will should him a fittingly out-of-shape choice to play Jamie. Others will marvel at the film’s style, and its ability to handle its compulsory high scenes with a certain elegance. The film’s pacing is inconsistent but usually provides enough entertainment to keep its audiences interested, and it peaks when its characters find themselves possessed by the cactus’ power. After that, it takes a few woeful turns that feel completely out of place in a movie that succeeds incredibly at making bizarre developments seem viable. Those final few scenes serve as an ineffective epilogue to an otherwise intoxicating and utterly peculiar film that has its own distinct and one-of-a-kind appeal. 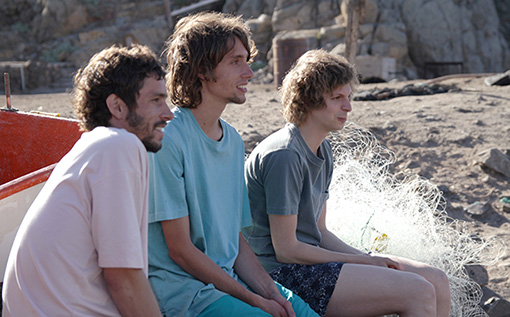