Title: Let Fury Have the Hour

A well meaning and deeply felt counter-culture documentary touting societal engagement, creative response to problems as well as activism more generally, “Let Fury Have the Hour” rages against communal indifference and fiscal self-centeredness, but never mounts much more than a scattershot attack against the mainstream targets and hegemonic establishment ideologies it fixes in its sights. Unfolding in the style of a rather exuberant mixed media collage, however, and featuring a wide array of interesting interviewees, the film is nonetheless a fairly engaging call to action, no matter the fuzzy, indistinct chorus of its melodious sermon to the choir.

Director Antonio D’Ambrosio’s movie, which premiered last year at the Tribeca Film Festival, is an unapologetically raw and impassioned slice of social history which takes as its leaping-off point the 1980s rise to power, respectively, of Ronald Reagan and British Prime Minister Margaret Thatcher, and then winds its way through the reactive artistic comings-of-age of a variety of figures. Those interviewed include artist Shepard Fairey, economist Richard Wolff, musician Billy Bragg, playwright Eve Ensler, rapper Chuck D, rocker Tom Morello, environmentalist Van Jones and filmmaker John Sayles, the latter of whom speaks quite interestingly and eloquently about attending the 1980 national GOP convention and experiencing firsthand the significant difference between the rhetoric on the floor versus what was televised in the event’s truncated network news packaging.

“Let Fury Have the Hour” touches on everything from counter-cultural phenomena like skateboarding and breakdancing to more recognized forms of art and music (particularly punk rock and political rap, in the form of Fugazi and Public Enemy). While discussing their own creative awakenings, the interview subjects provide a sociopolitical frame for their experiences, talking about (in their view) the predominant peddled worldview of those on the political right — that to care is selfish, to help is vain, and personal happiness is available chiefly through consumption and one’s individual purchasing power.

In one sense, D’Ambrosio’s headstrong resistance to more rigidly funneling his film through a stronger editorial lens is admirable, as it gives “Let Fury Have the Hour” a ranginess that keeps it fresh and surprising. Listening to Morello and others talk about discovering within themselves the tools to strike a fresh creative match, and continuing to work to redefine the world around them, is kind of inspiring and invigorating. At the same time, as a single cogent work, the movie leaves one wanting for more. There doesn’t seem to be a very strongly reasoned topic sentence here, something that a few half-hearted late stabs at connecting activism in general to the turbulence of democratic uprisings in Egypt, Tunisia and elsewhere seem to underscore. “Let Fury Have the Hour” has a rabble-rouser’s soul, but it needs more disciplined focus.

NOTE: “Let Fury Have the Hour” opens in Los Angeles at the Laemmle NoHo 7. For more information on the movie, visit its website at www.LetFuryHaveTheHour.com. 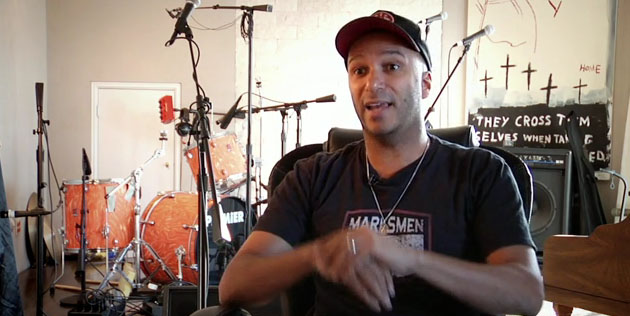