Bullet to the Head Movie Review

Title: Bullet to the Head

After dipping a toe into the pool of arthouse embrace and rejuvenation with James Mangold’s “Cop Land,” and finding the reception a bit chillier than he would’ve liked, Sylvester Stallone has mostly retreated back into his man-cave of 1980s-style actioners. This is not entirely a bad thing. His reasoned, surprisingly smart and moving “Rocky Balboa,” from 2006, stands as a compelling drama in its own right, and a worthy bookend to the original film. But this wounded mindset also begat 2008’s “Rambo,” a sloppy, nihilistic and near-pointless exercise in sadism and explosions-go-boom! theatrics.

The forthrightly titled “Bullet to the Head,” an adaptation of a French graphic novel set in the Louisiana bayou, would on the surface seem to fall comfortably in the mold of the latter — a block-headed, meat-and-potatoes-type action movie in which nuance is as much the enemy as any on-screen foil. And sometimes… well, sometimes the cover is the appropriate way by which to judge a book.

Stallone stars as Jimmy Bonomo, an unapologetically direct hitman who, when his partner gets killed after a recent job, is thrown together by circumstance with Taylor Kwon (Sung Kang), a by-the-book visiting cop from Washington, D.C. Each targets themselves, Jimmy and Taylor form an uneasy alliance, to try to bring down a shady figure of the criminal underworld (Adewale Akinnuoye-Agbaje) and the psychotic enforcer, Keegan (Jason Momoa), doing his bidding. When Jimmy’s daughter Lisa (the not-unattractive Sarah Shahi) gets caught up in the mix, it only further stiffens Jimmy’s resolve to finish things definitively.

The most disappointing things about “Bullet to the Head” have to do with just how much of a retread it feels like — from the villains, with their master list of all the politicians and cops on their payroll, to even the bizarre, declamatory voiceover narration that opens (“Sometimes you gotta abandon your principles and do what’s right”) and ends the film. Screenwriter Alessandro Camon’s adaptation of Alexis Nolent’s “Du Plomb Dans La Tête” delivers its exposition in comically chunky paragraphs, and never quite figures out a way to make the targets that Jimmy and Taylor must work their way through seem like more of a viper’s nest and less of an obligatory mortal ladder.

Director Walter Hill serves as a pace-master, and keeps things moving fairly briskly and effectively — even if the staging for one sequence where Keegan walks past a bunch of thugs, loudly murders guys in another room and then returns to the aforementioned room, where the thugs are not ready for him, is thunderously stupid. Stallone and Kang, meanwhile, have a bit of a nice, prickly rapport, even if their conflict seems largely manufactured. The problem, in a nutshell, is that “Bullet to the Head” isn’t quite insane enough. If you’re going to have a movie with an axe fight and an “Eyes Wide Shut”-style drugs-and-sex costume party where topless women tango with one another, then shouldn’t you also not have the incriminating evidence your bad guy is paying to retrieve stored in a folder marked “evidence”? That’s insane, but not in a good way. 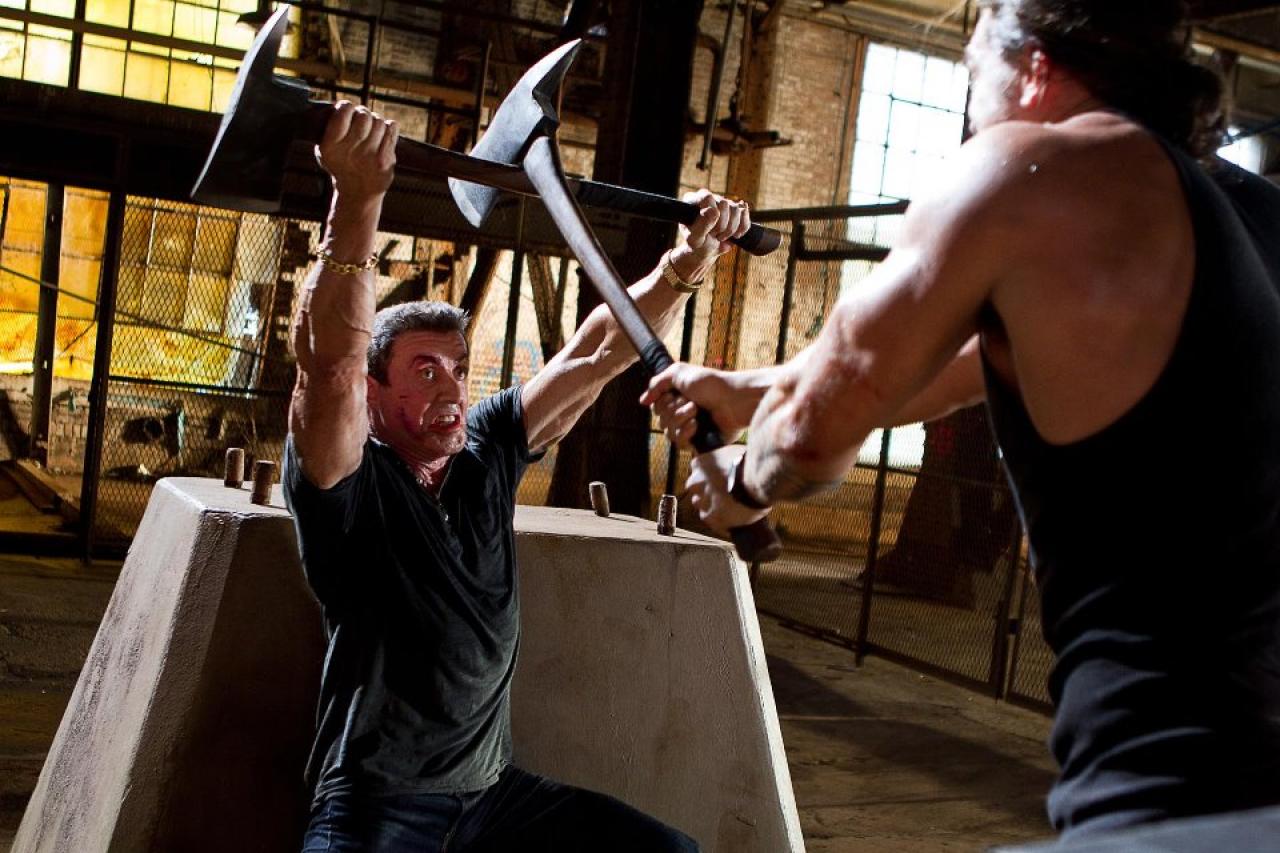