Shockya had the opportunity earlier this week to participate in a live chat with actor and director Fisher Stevens after a screening of his latest film, Stand Up Guys, which opens this Friday, February 1st. Stevens answered questions about working with acting legends Al Pacino, Christopher Walken, and Alan Arkin, and how he came to make this film. Enjoy the best moments of the conversation below.

Q: How did you direct Al and Christopher differently?

A: I directed Chris and Al in different ways. Before we started shooting, I knew Al much better than Chris and I spent a bit more time going over the script at the beginning with Al. So I felt a bit more at ease directing Al at first. With Chris I had to feel my way around at the beginning, but they both welcomed direction. Sometimes, they would disagree with me, but, ultimately, they would always try one the way I wanted it, the way I liked it. They gave me a variety of takes. When I started the movie, Al and Chris told me that they had done a reading a few years earlier of a different version of the script. Al played Doc, Chris played Val.

Q: What made this the version they wanted to do?

A: When I called Chris to say I was directing the film, he asked who was going to play Doc and he expressed interest in playing Doc himself. He said he really enjoys that role because, as he is getting older, he enjoys playing grandfathers. I tried to get someone else to play opposite Chris, not going to my friend Al Pacino, because I was told that he wasn’t interested. Until my phone rang one day and it was Al calling me after he had seen a Woody Allen doc I had executive produced and asking me to work on a doc with him. I said “No, I don’t want to work on a doc with you. I want you to read Stand Up Guys again and consider being in it with me directing. There was a long pause and Al said, “You’re directing?” and I said, “Yeah.” He read it and said, “Of course.” Four weeks later we were in pre production with Al and Chris. The first person I thought of for Hirsch was Alan Arkin. I had worked with him as an actor in the film Four Days in September twenty years ago. I guess because Chris and Al were already attached, it peaked Arkin’s interest and thank God he said yes.

Q: All the female roles were brilliantly written. Is that what attracted such great actresses as Julianna Margulies?

A: I auditioned all of the female characters, except Julianna, who I had worked with in the New York theater scene. I saw Lucy Punch in a Woody Allen film. I knew Vanessa from New York theater as well. But Addison [Timlin] was a discovery to me. She knocked the audition out of the park.

Q: What inspired you in the making of this film?

A: I was inspired by many films from the 1970s, including Dog Day Afternoon, Five Easy Pieces, Straight Time, and The Dirty Dozen. I loved the films from the 70s because they were about characters, and not so much about big plot point and big set pieces. I made sure there were no cell phones, no computers, nothing very modern in the film, except for the car they steal. Most of the clothes that the actors wore were vintage. The colors were muted. It was like time had forgotten this town and these people.

Q: This film is obviously very much about facing mortality, a very real concept, especially for men. How did the three stars of this film really face that concept head-on with you?

A: Yeah, it was important to ground this entire script in reality. That was the only way for it to work. We rehearsed and had long discussions about keeping everything real. Even when it comes to these hyper-blown situations. Fortunately, I had the greatest actors in the world to work with and they only know how to do things real. When it felt false, we did another take.

Q: What were the origins of the script and how did you come across it?

A: The script came about because the writer, Noah Haidle, was riding his bike in Coney Island one day and saw three old gangster-type looking guys sitting on a park bench drinking coffee out of a paper cup. He was imagining what their lives were like, and this is what he came up with. I was sent the script years later, made a bunch of tweaks and changes with Noah and with the producer Tom Rosenberg, and that is the film you’re seeing. And the actors of course chimed in.

Q: Has your experience as an actor helped you with directing? Knowing what it’s like from both sides of the fence, or does it make it a little more difficult?

A: Yes, being an actor absolutely helped me direct, especially with actors of this caliber.

Q: Was making this film as fun as it looked?

A: Yes, it was incredibly fun. Sometimes I would get lost just watching them act and forget I was directing. But it was a lot of work. But I would gladly do it again. 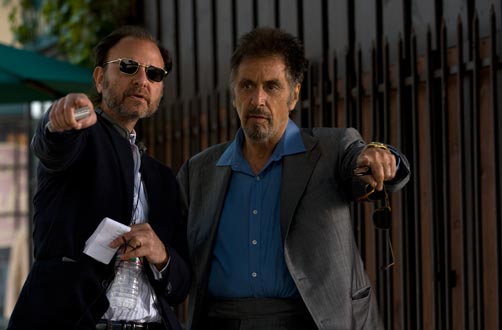