Gangsters get old. If they manage not to get killed during their prime, it is inevitable that hit men, getaway drivers, and all other forms of criminals will eventually age. Token actors such as Robert De Niro have capitalized on this idea with comedies like Analyze This, and there have been countless films that present the opportunity for a legendary hired gun to come out of retirement for one last job. Not everyone gets lucky, of course, and for Val (Al Pacino), his first day out after twenty-eight years in jail may just be his last day on this earth.

It would make sense to assume that Al Pacino and Christopher Walken have starred together in many films over their colorful careers from the past four decades. In fact, their only collaboration prior to Stand Up Guys is the regrettable Gigli, something both actors would surely be happy for viewers to immediately forget. Yet their similar filmic experiences suggest that their onscreen selves could easily be the best of friends, and it is therefore simple to comprehend that Val and Walken’s Doc have a heartfelt, deep friendship that goes back years from the moment they first meet on screen. These two are evidently kindred spirits.

Stand Up Guys, which refers to the loyal position held by Val after he was arrested following a job gone bad and kept his mouth shut for twenty-eight years, presents a steady reel of bonding experiences for the two career criminals as they traipse around for the entirety of an evening while Doc delays his assignment to kill Val for mad mob boss Claphands (Mark Margolis). Their adventures include helping a wronged woman get revenge on those who hurt her and springing their former getaway driver, Hirsch (Alan Arkin), from his assisted living facility for one grand night of living, the likes of which he hasn’t had in years.

It’s difficult to deny the appeal of having three aging actors deliver comic turns explicitly designed to bookend lengthy, productive careers. Putting these three Oscar winners together, however, is not enough by itself to make a strong film. While Arkin has turned in some of his best performances within the last few years, earning deserved Oscar nominations for Little Miss Sunshine and Argo, the same is not true of Pacino and Walken. Pacino no longer invests much effort in his characters, and Val, while charming in his own right, is hardly three-dimensional. Walken, who handed in a tremendous performance in Catch Me If You Can a decade ago, seems to be sleepwalking through his role, unable to muster up excitement or energy for any of the film’s crucial plot developments. This is far from Arkin’s best recent work as well, despite the potential of his role.

Though it fails to achieve a level of originality and intrigue that makes it substantially watchable, Stand Up Guys is ultimately a story of friendship, one that is difficult to dislike. In just over ninety minutes, the relationship between Val and Doc is firmly established as something unbroken by twenty-eight years apart, and Doc’s inability to perform his delegated task is a testament to the bond between them. Jon Bon Jovi’s Golden Globe-nominated original song and fitting anthem “Not Running Anymore” plays at one of the strongest moments of the film, when their connection is most deeply emphasized. This is far from a great movie, but it ends on such an endearing and smile-inducing note that it becomes impossible to walk away without some degree of optimism about the glory days and getting old. 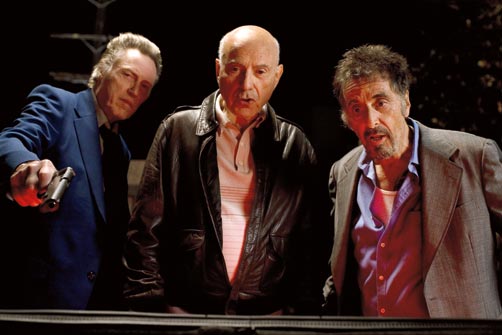