You think you’ve got relationship problems now? Just wait until you catch “Girls Against Boys.” Guy or girl, you’ll never want to attempt a date again.

Shae’s (Danielle Panabaker) your average New York City college girl – well, minus the massive apartment she has all to herself and her unconventional boyfriend Terry (Andrew Howard), a 40-something guy with a kid. When Terry opts to do the right thing and try to work things out with his wife, Shae’s crushed and sulks her way through her shift bartending at a trendy nightclub. When one of the newer bartenders, Lu (Nicole LaLiberte), catches Shae tearing up, she suggests the two go grab a drink.

One drink turns into countless shots at another wild nightclub where the ladies dance it up with Simon (Michael Stahl-David) and his buddies. When the dancing schvitz takes the bounce out of Shae’s curls, the group calls it a night and heads back to the guys’ place for one last beer and certain something else. But when Shae takes a pass on the latter, Simon insists. With her mother busy at work and her best friend not answering her cell, Shae turns back to Lu who vows to end Shae’s man problems – literally.

Bad boyfriends are lame, so seeing a pair of armed and dangerous leading ladies fight back in über gruesome ways should be a blast. However, rather than have some fun with the concept, writer-director Austin Chick takes his material way too seriously, turning what could have been a murderous romp into something truly disturbing, disgusting and often quite miserable.

Killer or not, you’ve got to want to root for the protagonist, but Shae never manages to earn an ounce of sympathy – even when she really should. Yes, you’ll feel bad for her when she’s taken advantage of, but her behavior beforehand totally dilutes the appeal of the character. The girl was dating an older man with a kid; what did she think was going to happen? He was going to cut his wife and kid off for her completely? Of course not, and Terry even tries to end their fling in a respectful manner. It’s Shae that sulks and lurks around his house ultimately enticing him to cross the line one last time. It’s her fault!

The rest of the film crashes and burns courtesy of Shae’s relationship with Lu because it’s entirely unfounded. Lu is pretty persuasive when she first crosses paths with a lonely Shae and offers to help, but when things get bloody, Shae should have put her foot down for the sake of morality in general and because that’s the character that Chick established in the first half of the film. You just can’t have a good girl with a cute little cat who sobs in a ball on the floor when she loses a guy turn around and be okay with blowing her enemies away.

Admittedly, I may tend to give Panabaker a little more credit than she deserves, but here I really am hesitant to blame her for Shae’s problems because all of the characters are underdeveloped, the story is totally nonsensical and Chick’s shot selection makes everything exponentially worse. At least a quarter of “Girls Against Boys” consists of unnecessarily long close-ups on Panabaker emoting and while emote she does, it’s generally not the emotion you’d expect, making the character incredibly difficult to track.

The film also suffers from travel overload. The characters take countless cabs, have a karaoke session during a drive out of the city and ride a Vespa to Coney Island. Of course they’ve got to have a means of transportation to get from one place to the next, but do we have to experience such a huge chunk of the drive with them? On the bright side, the driving material is a major step up from Shae’s laughably frequent trips to the bathroom.

Clearly “Girls Against Boys” has a number of detrimental problems, but it is worth noting that Chick did approach the project with some good intentions and they manage to shine through every once in a while. First off, he’s got an excellent handle on the tone of the film. It doesn’t work very well and makes the material quite dreary, but it’s consistent and that at least helps keep the piece afloat. He also offers up a handful of unnervingly memorable moments, one of the best of which is a deep conversation about Cap’n Crunch while one of the girls’ victims bleeds all over the floor behind them.

If only Chick had committed to this more playful approach rather than attempting to put together a preachy piece about feminism and then drowning it in desperate attempts of authorial expressivity we might have ended up with something more along the lines of a fun, campy slasher film. Instead, Chick tries to make “Girls Against Boys” something that it’s not – a film that’s got something profound to say. 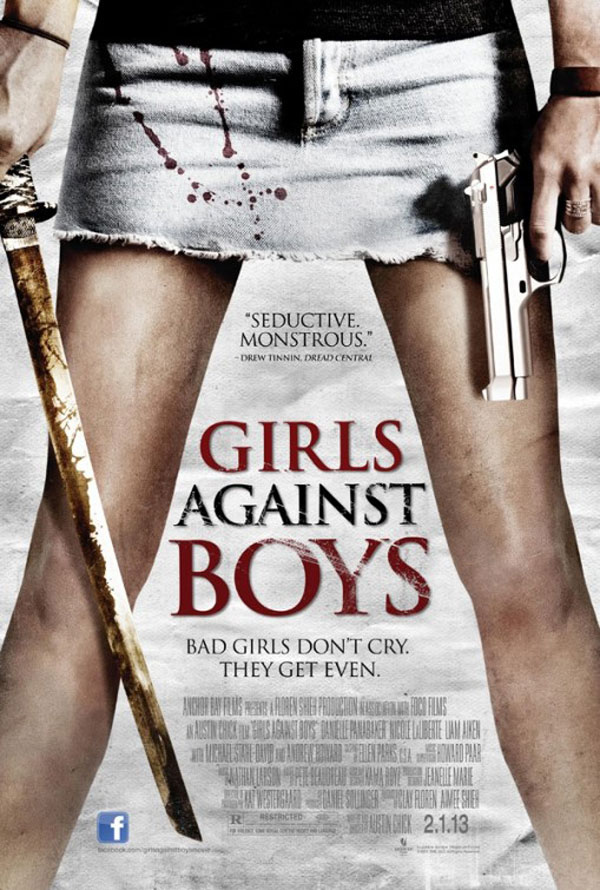