The key to restarting a zombie’s heart is a pretty girl. The key to making a big screen supernatural/human relationship work is lightening up.

We’re in the midst of a zombie apocalypse and R (Nicholas Hoult) is amongst the living dead. He calls a defunct airport home and spends his days lumbering around, occasionally bumping into or grunting at his zombie cohorts until they’re hungry enough to venture into the big city for some eats. While R does find something tasty to gnaw on, he also encounters some unexpected eye candy – Julie (Teresa Palmer). Rather than make Julie the next item on his menu, R vows to keep her safe, shielding her from his flesh-eating buddies and escorting her to the airport.

A vampire/human romance is one thing, but a zombie/human relationship is an especially tough sell. The “Warm Bodies” book takes itself very seriously but, thanks to effective narration, quality character development and the power of a reader’s imagination, it’s easy to get on board. With the audience’s imagination no longer in play with the big screen version, presenting “Warm Bodies” in a dark, dramatic fashion would have made it nearly impossible to convey the story in a believable manner. However, Jonathan Levine manages to adapt the source material in the best possible way, keeping key plot points and character details intact, but infusing the tale with an unexpected yet wildly appropriate degree of humor.

Levine wins you over immediately with a well-written, amusingly self-deprecating voiceover. R skulks around the airport while his narration offers up some zombie 101 and while he’s simply stating the obvious, the fact that it’s coming from the mind of someone who’s actually dead makes it especially charming and amusing. In a matter of minutes, Levine’s already established his tone, provided a good deal of plot information, and made us fall for R.

Then again, Hoult does have the advantage of R never being your typical zombie. He’s good-looking, goes from mute wanderer to a man of quite a few words in an instant, he has the agility of a mediocre action hero, and very clearly is capable of thinking and acting on his emotions. It’s borderline ridiculous and the whole concept of R’s feelings for Julie restarting his heart is preposterous, but since when do we know the anatomical details of the living dead? We don’t and that’s what makes it so natural to fall right in line with this unique representation of a familiar scenario.

The one main misstep in adapting Marion’s book for the screen is the choice to present some of the story from the human perspective, specifically Julie’s. Part of the intrigue of the book comes from the fact that, just like R, you’re stuck inside his head. You come to know and love him through his thoughts so feel the sensation of being trapped, making you desperate for him to break through the disease. While that still exists to a degree in the film version, you’re also constantly being ripped away from it and forced to trudge through duller material.

On the human side of this zombie apocalypse, John Malkovich’s General Grigio is in charge and has a chunk of the remainder of humanity holed up in the city behind seemingly impenetrable walls. As his daughter, Julie is forced to play along, assigned to venture out into the infected zone with her boyfriend, Perry (Dave Franco), and best friend, Nora (Analeigh Tipton), to track down more medical supplies. The scenario does lead to a few exciting showdowns between zombies and humans, and a rather fun turn of events involving the Boneys, zombies that have wasted away to evil, skeletal remains, but as the heart of the human component of the film, Julie sucks the life out of it.

Palmer doesn’t deliver a poor performance per se, but she is surrounded by a cast of characters that are far livelier. Even with a vast amount of believability issues, Hoult makes for a convincing zombie. Rob Corddry does offer up a great deal of comic relief as R’s zombie buddy, M, but in comparing their performances, it’s easy to see that Hoult has an exceptional amount of control over his performance, always minding his movements and words as much as possible. Tipton is the standout on the human side courtesy of on-point comedic timing, further stealing the spotlight from Julie who simply isn’t as fun to watch as the movie’s straight man.

However, nearly all character flaws and bumps in the road are smoothed over by perfect pacing. Levine and editor Nancy Richardson do a stellar job combining beats and cuts with wildly appropriate music in a fashion that propels you from one scene to the next, and often with a laugh. Even when “Warm Bodies” takes a turn for the dramatic, Levine is there to lead his cast through the more emotional material, turning what could and should be ludicrous supernatural romance nonsense into a well-earned heartfelt payoff.

It requires the suspension of disbelief, but “Warm Bodies” is worth it. 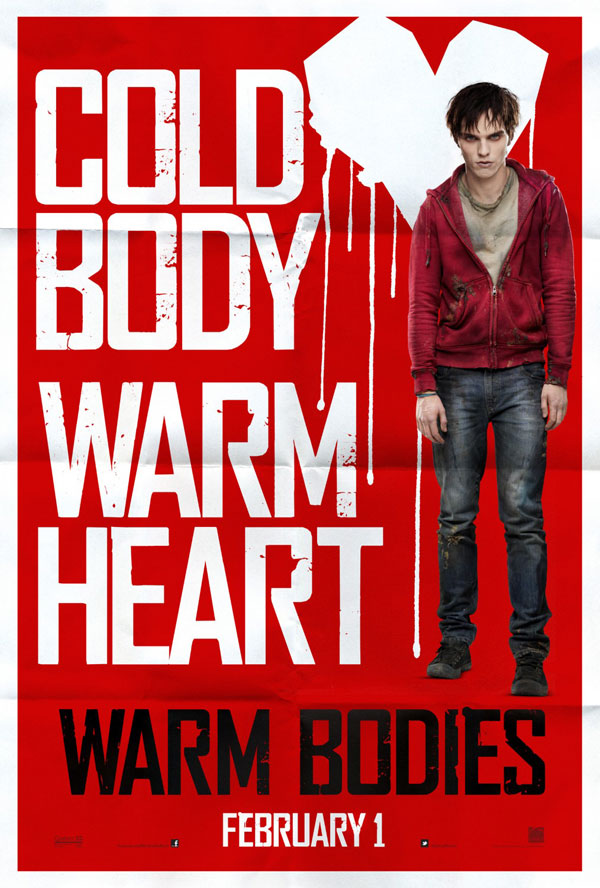