Set five years after the events of its predecessors, “Paranormal Activity 4” focuses on a Nevada family that includes cute teen girl Alex (Kathryn Newton) and her adopted kid brother Wyatt (Aiden Lovecamp). When a neighbor her brother’s age has to move in with them following the hospitalization of his single mother, however, strange and bad things start to happen, leading Alex to wonder what’s going on. The construction of this sequel, from “Catfish” and “Paranormal Activity 3” co-directors Henry Joost and Ariel Schulman, follows the same, laid-out rules of the spooky, bump-in-the-night franchise, consisting of found footage recovered from the victims prior to their hauntings. This tack definitely shows some wear and tear, sagging at times and resulting in many of the movie’s scares coming across as familiar, even as the filmmakers strive to top themselves.

What works, however, are the strong, naturalistic performances, which are abetted by a steadfast refusal to genuflect to gore. Whatever one thinks of them — and there are some fascinating parallels in the respective narrative arcs of the franchises — the “Paranormal Activity” films have not attempted to pivot into the gory territory of the “Saw” flicks. For better and/or worse, these movies are elongated exercises in tension and terror. While it’s the lesser entry of the quartet, there’s still some juice here, mainly because of the intelligence and care applied to the look and feel of the film. 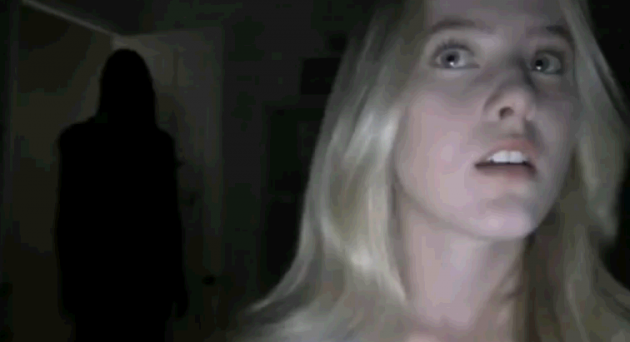 Arriving on home video in a Blu-ray/DVD combo pack with a nice, complementary cardboard slipcover and a digital copy to boot, “Paranormal Activity 4” includes nearly 30 minutes of footage not shown in theaters. It also includes both the R-rated, 87-minute theatrical cut and a 96-minute, unrated cut on both DVD and Blu-ray, which is nice. While there’s a somewhat valid point to be made in thinking that screening format doesn’t matter as much in a found-footage exercise like this, the film’s 1080p high definition transfer and DTS-HD 5.1 master audio track actually offer up important image clarity and ambiguity specific to the formats being used (Skype, digital video, surveillance cameras) within the movie. The background blacks are deep and consistent, and the extra aural punch really takes advantage of a superlative sound design.

As for the extra footage itself, there’s some hide-and-seek shenanigans between Alex and her friends amongst the material, and a lot of other incidental bits that hardcore series devotees will have fun dissecting. More casual genre fans may decry a lack of more robust behind-the-scenes supplemental features, but in a certain way this works for the series, keeping intact a distance and remove. I would argue, however, that it wouldn’t hurt to have used the release to flesh out the mythology of the offending spirit, and its roots in a coven, a bit more. Surely there are tidbits that fit within the master framework of this unfolding narrative (a fifth film hits theaters later this fall) that can’t be totally worked into the movies themselves. Or maybe a lot more clues are there, they’re just not as readily apparent yet. 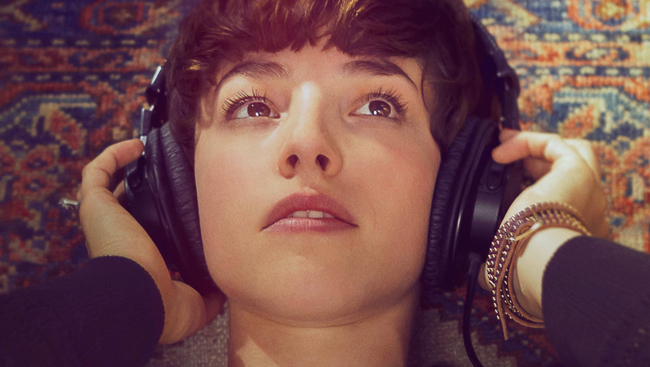 An artful, perceptive look at human desire’s ability to arrive in sudden, rolling fashion, the Los Angeles-set “Nobody Walks” is a delicate but somewhat mesmeric arthouse bauble from director Ry Russo-Young and “Girls” creator Lena Dunham. The winner of a special jury prize at last year’s Sundance Film Festival, the movie is a fragile and kind of slight but still ultimately rewarding drama. In it, John Krasinski stars as commercial sound editor Peter, who takes in 23-year-old visual artist Martine (Olivia Thirlby) as a favor to a friend of his wife Julie (Rosemarie DeWitt). Martine holes up in their guest house, and soon succumbs to the advances of Peter’s assistant, David (Rhys Wakefield), which has a strange impact on the former’s own complicated and emerging feelings.

The narrative proper here is rather pat, if boiled down to basics, but “Nobody Walks” is a rather gorgeous work of melancholic fumbling and redemption — one whose soft visual template fits nicely and surprisingly easily with its slow-peddled story of wayward romantic glances, and a general haze of personal and professional ambivalence. The performances are all nice (India Ennenga is especially noteworthy as Julie’s teenage daughter from a previous marriage), and Dunham’s touch with pin-prick dialogue is nicely counterbalanced by Russo-Young’s aforementioned gauzier instincts.

“Nobody Walks” comes to Blu-ray in a nice 1080p high definition transfer with DTS-HD 5.1 master audio track, presented in 16×9 widescreen. Its supplemental extras consist of interviews with Russo-Young and Thirlby, a collection of deleted scenes, an “AXS TV” behind-the-scenes featurette on the movie, its theatrical trailer and “Scorpio,” a completed version of the experimental short film that the character of Martine is laboring on in the film. This is a quite nice packaging of bonus materials for a title of this stature, one that greatly enhances its collectibility; arthouse fans should definitely check it out. 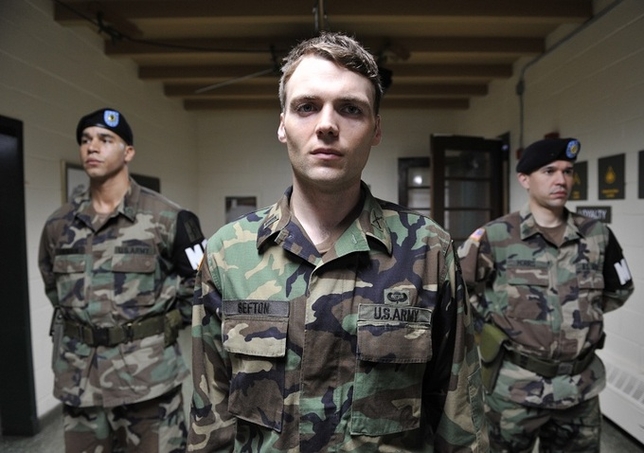 Deeply felt but questionably cast, director Michael Connors’ “Allegiance” delves into some of the sociopolitical undercurrents of the Army in telling the story of a National Guard lieutenant (Seth Gabel) who becomes embroiled in a last-minute AWOL attempt by one of his soldiers (Shad Moss, aka Bow Wow). Set in 2004, against the pre-surge backdrop of the Iraq War overseas, the movie fills out some of its supporting roles with capable players (Aidan Quinn, Pablo Schreiber, Malik Yoba), but is dinged by a plodding pace, unsophisticated conflict, and the unfortunate amount of dramatic lifting required of its leads. “Stop-Gap” is among the handful of films that have better handled some of the same meaty questions of loyalty, duty, and class and racial privilege that “Allegiance” wants to examine.

“Allegiance” arrives to home video via a DVD/Blu-ray combo pack, presented in non-anamorphic 2.35:1 widescreen with a solid DTS-HD 5.1 master audio track. A feature-length audio commentary track with Gabel, Connors and producer Sean Mullin anchors the slate of bonus materials, which otherwise includes a making-of featurette and a copy of the movie’s trailer. Both of the supplemental extras highlight the significant effort behind this independent production. It’s just a shame the overall results weren’t more involving.

An impressive turn from James Remar — at once rascally, rooted and ominous — anchors multi-hyphenate Jason Trost’s “All Superheroes Must Die,” an engaging slice of revenge cinema masquerading as a superhero flick. The story finds four masked crime fighters stripped of their powers by a cruel arch-nemesis, Rickshaw (Remar), whose evil plans they have repeatedly thwarted over the years. Rather than just kill them, though, Rickshaw sets out to break their spirits and even souls, by way of a “Saw”-like game in which explosives are strapped to various innocents all across a town. There’s a kind of brutal, minimalist efficiency to Trosts’ low-budget movie, which eschews exposition for action set pieces that thrust a dizzying, disorienting tone of protagonist-identification upon viewers. It’s not for everyone, this crafty calling card flick, but it’s pretty effective. Alas, while “All Superheroes Must Die” comes to Blu-ray presented in a nice 1080p high definition 2.35:1 widescreen transfer, with a DTS-HD 5.1 master audio track and optional English subtitles for the deaf and hard of hearing, there are absolutely no bonus features, which really doesn’t seem to make sense on a title like this.

The explosion of the home video market in the 1980s gave rise to an entire sub-genre of kick-’em-up action flicks, and ergo the careers of guys like Jeff Speakman. A throwback to that sort of unapologetic, bare-knuckle movie (the plot revolves around an illicit underground fighting ring), director Jonas Quastel’s “Forced to Fight” has the relative benefit of Gary Daniels (“The Expendables”), a former world kickboxing champion whose skills render unnecessary any sort of tricked-out editing or sleight-of-hand-and-foot choreography.

Daniels stars as Shane Slavin, a guy who’s transitioned out of the fight-for-pay game as part of a promise to his wife and young son. But when his younger brother betrays a ruthless crime boss (Peter Weller), Shane has a tough decision to make. So… “Forced to Fight” is sort of like “Contraband,” really, but with more judo, jiu jitsu, wrestling and power-punching in lieu of gunplay, and a bit less nostril-flaring emoting. New to Blu-ray in a 1080p high definition 1.78:1 widescreen transfer with a DTS-HD 5.1 master audio track, “Forced to Fight” includes behind-the-scenes featurettes that spotlight the movie’s action sequences and Weller’s involvement.

All dozen episodes of the award-winning animated Cartoon Network kids’ series of the same name are collected for “The Amazing World of Gumball: The Mystery,” a new DVD set gathered in a regular, white plastic Amaray case and presented in a letterbox widescreen format. Fueled by a combination of 2-D and 3-D animation against a live action backdrop, creator Ben Bocquelet and director Mic Graves’ series is a whimsical if frequently baffling explosion of color and attention-grabbing energy — a mishmash of styles that helps the show stand apart from much of its kiddie competition. The stories center around the cat-like title character, and are familiar and easy to follow tales of familial conflict and adolescent freak-out, peppered with all sorts of scatological gags and wild asides. The only “problem,” as it were, relates chiefly to adult relatability, of which “The Amazing World of Gumball” has little, since there’s not much interior logic to things. Tone is everything to children, though (hence baby talk), and the wonky, eye-catching pitch and attitude of this series certainly explains its popularity.

On the nonfiction front, while the rise of social media has given carte blanche for anyone and everyone to unleash their inner “foodie” and post online photographs of their every meal, it’s also helped feed a growth industry in culinary documentaries, like “Kings of Pastry” and many more. Among the latest: “Three Stars,” director Lutz Hachmeister’s look at the coveted Michelin restaurant rating, and what it means to diners and how it influences chefs and owners. The film’s somewhat pompous subtitle (“The World’s Greatest Chefs Reveal the Art of Culinary Excellence”) courts thoughts of a Will Ferrell-type spoof, but this rather captivating movie actually strikes a nice balance between showcasing the artistry and philosophy of gastronomic experimentation and the business side of such exploration. In other words, there’s a real and involving narrative here separate and apart from an unblinking appreciation for frou-frou recipes. Housed in a regular plastic Amaray case, “Three Stars” comes to DVD via First Run Features — with chapter stops but sans any bonus features. 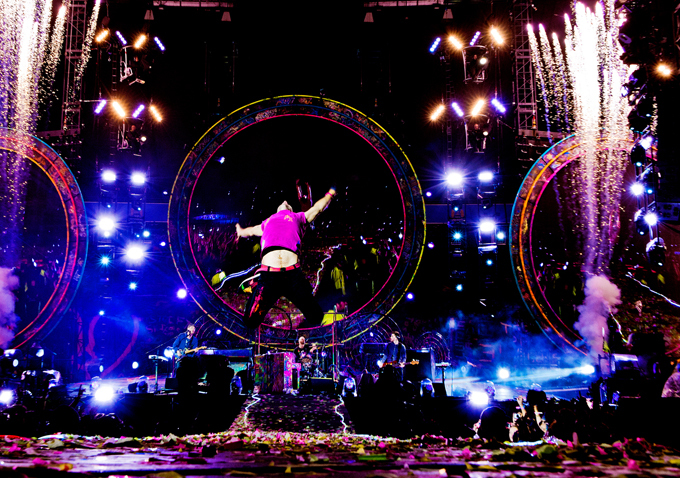 For music fans, meanwhile, “Coldplay Live 2012,” the British band’s first concert film in nine years, spotlights the group’s acclaimed “Mylo Xyloto” world tour in fairly fine fashion. Directed by Paul Dugdale, who helmed both Adele’s “Live at the Royal Albert Hall” and Prodigys’ “Worlds on Fire,” “Coldplay Live 2012” is an arresting visual document in and of itself, comprised of footage from three of the band’s shows — at Paris’ Stade de France, Montreal’s Bell Centre and their triumphant headline performance at the Glastonbury Festival. Chris Martin, Jonny Buckland, Will Champion and Guy Berryman rip through all of their best known tunes, including “Charlie Brown,” “Paradise,” “Speed of Light” and more (Rihanna also guests on “Princess of China”), and Dugdale’s admittedly aggressive editing tries to replicate the concert experience for home viewers. At times it seems like a mismatch (on the dance-y “Every Teardrop Is a Waterfall,” for instance), but given that the “Mylo Xyloto” tour was so full of blacklight-and-neon shenanigans, the effect is overall delirious and mesmerizing. Available across formats, “Coldplay Live 2012” can also be purchased via iTunes.