A serviceable enough B-feature of the sort that could appropriately induce nightmares in adolescents and arachnophobes, modestly budgeted horror offering “Spiders” opts for action antics when a bit more creepy-crawly tension and mystery would have better suited its story.

“Spiders” is set in New York City, but centers around mutant arachnids whose DNA was first discovered in a spacecraft found deep under a Russian ice mountain more than 20 years ago. Gene-spliced in space with many animals, it only took with spiders. This becomes a problem for transit supervisor Jason Cole (Patrick Muldoon) when a chunk of the overrun space research station doesn’t burn up upon atmospheric re-entry, and instead rips its way into an underground subway station. The spiders scatter. While an old, presumably defected Russian scientist, Dr. Darnoff (Pete Lee-Wilson), works with the American military, headed up by Colonel Jenkins (William Hope), to try to contain and quarantine the situation, Jason learns the truth and, along with his estranged health inspector wife Rachel (Christa Campbell, exhibiting a fine case of plastic face), tries to both rescue their daughter Emily (Sydney Sweeney) and prevent the colossal queen spider from reuniting with her eggs and unleashing a most decidedly bad time on New York as a whole.

Working from a script co-written with Joseph Farrugia, from a story credited to Boaz Davidson and Dustin Warburton, director Tibor Takacs baits an interesting hook, and marshals a decent if eventually much-overused mix of practical and CGI effects. But while the screenplay tries for a bit of clever inversion (the doctor is essentially giving good advice, while the strident colonel immediately switches into scorched-Earth mode), the movie takes all sorts of annoying and stupid short cuts (“Be my guest, it saves me the paperwork,” says a medical examiner when Jason asks to take the spider egg sacs with him from an autopsy) that quickly mark it as an essentially lazy take on a much more interesting concept.

In addition to of course positing that a governmental cover-up involving the hitman-assisted murder of dozens of witnesses doesn’t somehow raise more questions, the film is peppered with all sorts of interesting avenues left totally unexplored, like post-Cold War tension and the notion that by blocking security cameras and hiding the queen these space spiders are actually quite intelligent, and maybe even have some sort of plan. In general, given the movie’s PG-13 rating and its plot, more mystery and less action — which reaches a point of diminishing return in the third act, given the movie’s cramped, quarantined city block, where much mayhem takes place — would have given “Spiders” more of a chance at achieving something memorable. As is, with its square-jawed familial imperilment and frontal assault fetishism, wherein plenty of spindly legs smash through windows and get slammed in doors, Takacs’ movie is a throwback to enjoyable but forgettable VHS-era creature-feature entertainment. 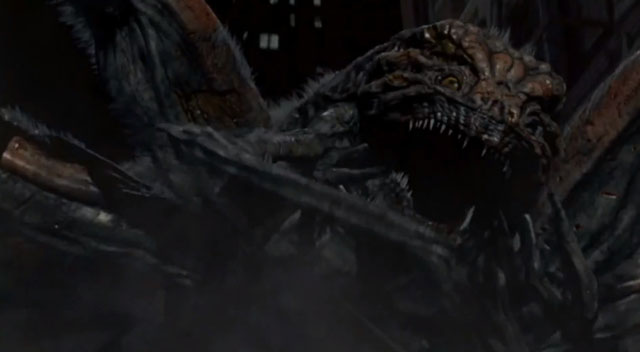