Paul Andrew Williams is a director to keep an eye on. While my only exposure to him has been his recent Cherry Tree Lane (review here,) in that film Williams showed me enough talent and understanding of cinema that could make for a most promising film career. His next film, Song For Marion is a divergence from his horror roots. I say that’s good, as it shows Williams wants to challenge himself and stretch beyond his comfort zone.

What follows is a conversation I recently had with Mr. Williams about the film, and even how the board game Clue can inspire filmmakers.

One of the things that worked in the film’s favor is the use of slow build as opposed to outright gore and quick cuts. Was that your intention?

Paul Andrew Williams: The idea of the film is to show that this is a horrific event. There are parts of it that were going to be mundane, so it’s actually more intimidating than terrifying, and it was just trying to work on that. We shot the whole thing in two weeks, so it was how do we get the best out of this in a short period of time in terms of what we were filming, and that was what we were thinking about most of the time.

It’s the sort of film that people find terrifying, and some people can’t watch. And some people think it’s the worst thing they’ve seen, so you really can’t figure out what it’s supposed to be. It’s a very subjective thing. What frightens and scares some people is very different for everyone.

I’m not a gore hound at all. I mean I like it in certain films, but it’s more interesting for me to see the reactions of people who aren’t brutally injured, having to witness it, be it through the victim or the perpetrator or the wife or whatever. That sort of thing interests me more than just seeing someone get cut up and stuff. I’m not really a big fan of that. What actually is more frightening is what if this was to happen and it wasn’t a movie. No superhero is going to come through the window and save everyone. A lot of us are very luck to have never been in that situation, so we have no idea what we would really do.

Your use of sound, especially the ambiance in the film is tremendous. You also used music very sparingly. Was that an inspired choice?

The idea was to try and be ominous, especially in very slow motion. It was actually sounds of them, and we weren’t trying to emulate anything, but enhance moments of dread. Again, it’s difficult you could say that you’re trying to manipulate an audience on some level. Horror is such a subjective medium.

When you sat down with your leads (Rachael Blake and Tom Butcher) to breakdown the script, and they see they’re going to spend a majority of the film tied and gagged, how do you prepare them for that?

They knew what was going to happen in the film. They read the script, and if you read it, you know what’s going on. There are no surprises in the film about what’s going to happen to you. We did spend a good couple of days talking about their relationship, and spend time getting to know them personally. And in this situation, you’re really not the ideal couple. Most of us don’t have the ideal, family scenario that they try to show in films before something terrible happens. Most of us argue, and that’s what I tried to sort of show. Just because something bad happened to them, doesn’t mean we should be initially sympathetic to them.

The character of Rian is arguably the worst human being imaginable with all the deeds he does in this movie. What inspired him?

The actor who plays him, Jumayn Hunter is actually a very nice guy. This guy does bad things, and the whole idea of the film is the morality of the bad things he does, and he gets along with the little kid, and he’s trying to be a nice character for him. In some ways his morality is a screwed up, to where he manage to be good to people, and and still think he’s a good person. Actually if you think about it, he has an issue in his life. If he gives the boy some money, he can keep him quiet. But at the same time, he rapes this woman and doesn’t think twice of it.

Cherry Tree Lane is available on DVD and On Demand now. 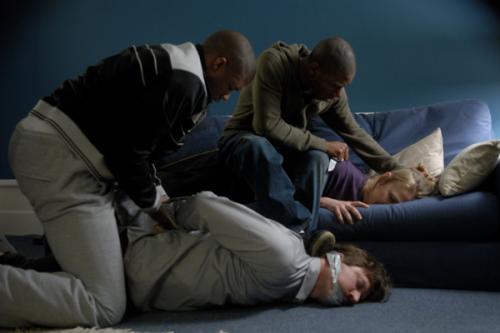