Jean-Luc Godard once said that cinema ends with Abbas Kiarostami. This is not entirely off-base. Kiarostami represents the other in film, in the sense that his style is somehow abstract, enigmatic, and narratively simple. True, as the cliche goes, his films are not for everyone, yet I still can’t help but find them to be vitally important for any cinephile. Certified Copy was something that I loved instantly for its unique vision, philosophical inquiry, and distinctly compassionate vision of the human condition. His newest film, Like Someone in Love, goes even further but dwells in the same world of modernist filmmaking. Set in Japan, three people find themselves in a constant struggle against themselves and others. There is no real “battle” going on, vocally or otherwise. AK makes it even more frustrating because there’s no one to blame. Like every great piece of storytelling, our characters are constantly denied what they want most. They are swimming against a tide that is stronger and whether or not they succeed is always questionable. Putting it simply, AK refuses to allow us to fall comfortably into the bed of Hollywood’s mediocrity.

In the press release, several producers and film critics submitted essays and commentaries on Kiarostami’s work. All of them enlightening, but producer Marin Karmitz had to be the most compelling in his description of AK’s method. Much like a painter or sculptor, he chips away at the superfluous, leaving the core and soul of the film. Indeed, this sounds much like what an editor does, but the difference is that Kiarostami does it himself while filming. This conscious effort to mentally edit one’s own work is almost an act of supernatural ability. But what is left is undeniably the heart of the work. Like Someone in Love is very much a product of that process; it tells a story that is both narratively meandering and illuminating in the sense of providing us with an incisive view of each character’s inner life. AK seems to underscore this very point with the opening shot of a cafe in which a woman is speaking, but it’s difficult to discern who is actually doing the talking. Communication is a key theme in both Certified Copy and this film.

Like Someone in Love tells the story of three people in modern day Japan that find themselves at odds with one another. Akiko (played by Rin Takanashi) is currently attending college, but funds her education and living through companionship. She has a boyfriend named Noriaki (Ryo Kase), whose possessiveness and jealousies are constantly coming between them, causing a great deal of friction, with Akiko becoming more and more secretive. What makes this relationship so interesting is that the more Noriaki pushes towards her (or in other words, tries to invade her private life), the more she pulls back. They go back and forth. In the opening shot, the woman talking is revealed to be Akiko conversing with Noriaki, who demands to know her location. This turns into something even more absurd when he asks that she count the tiles in the bathroom so that if she lies, he will find out.

Akiko is soon sent on an evening with Takashi (Tadashi Okuno), an elderly professor who spends his time doing translations in his lonely, isolated apartment. This evening is completely harmless, as it turns out. Takashi wants to have dinner with Akiko. But their interests and desires are on two separate sides of the spectrum. Eventually, all of them come in contact with each other, where Takashi has Noriaki believing that he is actually Akiko’s grandfather. Like Someone in Love is difficult to summarize in the sense that nothing actually happens. What Kiarostami relies on is each character’s inner life. It’s brought to the forefront of the “action”. He denies them what they desire most in life, and keeps them at a distance from one another. Long, awkward car rides, where they all sit there quietly, seemingly in their own respective bubbles. It’s an uncomfortable experience that had me feeling the tension of a possible explosion of reaction and consequence. Like the characters, AK denies us what we want most: physical conflict.

Like Someone in Love is perhaps Kiarostami’s most puzzling, yet arresting film. Throughout the film, there is a contemplative longing that each character feels because they are not receiving what they feel they deserve. Some react violently, while others watch passively and merely try and comfort. AK’s shooting style is lovingly stable and centered. Each shot feels as meticulous as the last. I certainly could see some striking similarities in his shot choices with his previous film, Certified Copy. Only in this case, there is a direct emphasis on neon lights, crowds, and noise. It’s all contrasted with the solemn melancholy of Takashi’s existence, whose walls are filled with dusty books, cluttering his tiny apartment. Abbas Kiarostami is a miraculous filmmaker, whose sense of compassion and intellect are as compelling as a story that utilizes the traditional three-act structure. He simply does not need it. We need filmmakers like Kiarostami to rescue us from normality, and deliver us into worlds that we may not fully understand. 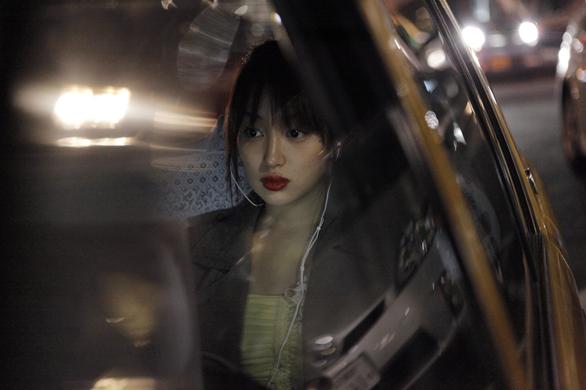