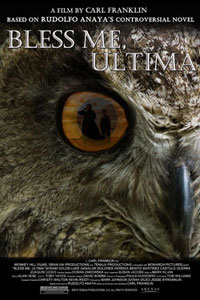 “Dark Skies” and “Snitch” are the big ones making their way to theaters this weekend, but February 22nd also brings the less hyped, albeit very influential, “Bless, Me Ultima.”

Based on Rudolfo Anaya’s Premio Qunito Sol-winning novel, Carl Franklin’s feature highlights the Chicano culture of the 1940s in New Mexico. When young Antonio’s (Luke Ganalon) parents invite the curandera, Ultima (Miriam Colon), to live with their family, Antonio takes to Ultima’s spiritual guidance, causing him to question how he lives his life, the divide between good and evil, and the difference between what Ultima preaches and what he learns at church.

In honor of the film’s limited release, Ultima herself, Miriam Colon, was thrilled to take the stage at her own Puerto Rican Traveling Theater in New York City to discuss her passion for the project. Check out what Colon had to say about embodying such an influential character, working with her immensely talented young co-star, the movie magic behind Ultima’s spiritual treatments and more.

Watch it all in the video interview below and be sure to catch “Bless, Me Ultima” when it arrives in select theaters on Friday.