The somewhat plausible premise of the White House being attacked by terrorists, and the Secret Service subsequently playing a cat-and-mouse game with impossibly high stakes, inflicts serious emotional and physical damage in a short period in the upcoming action thriller ‘Olympus Has Fallen.’ Director Antoine Fuqua worked with a team of consultants, including former Secret Service, FBI, CIA and law enforcement officials, while developing the movie, to create an authentic depiction of an enemy destroying the ultimate symbol of American freedom, the White House. While the movie was shot in Shreveport, Louisiana, and the helmer built replicas of the most important buildings and symbols from America’s capital, his actors praised him for his dedication and realism while shooting.

‘Olympus Has Fallen’ follows a group of terrorists who take down the White House (code name Olympus), leaving Mike (Gerard Butler) to try to save the president of the United States, Benjamin Asher (Aaron Eckhart). The small group of heavily armed, meticulously trained extremists launch a daring daylight ambush on Washington, overrunning the White House and taking the president and his staff hostage inside an impenetrable underground bunker. As a battle rages on the White House lawn, Mike joins the battle, and finds his way into the besieged building to do the job he has trained to do all his life: to protect the president at all costs.

Mike uses his extensive training and detailed knowledge of the presidential residence to become the eyes and ears of Acting president Allan Trumbull (Morgan Freeman) and his key advisers. With tensions rising, the radicals begin executing hostages and threaten to kill more unless their demands are met. America’s national security team must rely on Mike to locate the president’s young son, Connor (Finley Jacobsen), who is being sought as the ultimate test of the president’s loyalty to his country. Mike must also rescue the president before the terrorists can unleash their ultimate plan.

Fuqua, along with several members of the cast, including Angela Bassett, Dylan McDermott and Rick Yune, generously sat down recently at New York City’s Waldorf Astoria Hotel to talk about the filming of ‘Olympus Has Fallen.’ Among other things, the director and actors discussed the sensitive nature of the film’s political subject matter; the physical challenges of shooting the movie, including rebuilding the White House and the extreme heat in Shreveport; and the joy of working with both Fuqua and Butler.

Fuqua passionately discussed the sensitive nature of the film’s subject matter, and how they were reminiscent of the September 11 attacks, by saying the images of that day “will last forever. It was an unfortunate part of our history. In that type of situation, you don’t want anyone to forget what happened.” The helmer added that “we have to stay on our guards and avoid these things from ever happening again.”

Fuqua also said that he thinks similar attacks are fine “to experience in films, as a form of entertainment. But I don’t think we should ever forget. It’s a movie about terrorism, so it should be upsetting to see on screen.” He added that if seeing attacks on screen upsets audiences, they’ll never want to see them happen again. “That’s the power of cinema, where everyone gets to walk away okay,” Fuqua added.

The filmmaker also pointed out that “while we’re a free country, these guys took over the plane with box cutters. Now it’s in the news again about knives going through an airport.” He added that if audiences remember the attacks, which he can remind them of through cinema, then maybe people can take action to stop the attacks.

Bassett, who played Secret Service Director Lynn Jacobs in ‘Olympus Has Fallen,’ said some scenes brought back memories of September 11, such as when her character is in the situation room. “In this type of film, you can’t help but be reminded of that part of history. But we rose to the challenge, and presented a united front,” she said.

Besides the emotional trials the film brought on through its sensitive subject matter, Fuqua said there were a lot of difficult physical challenges while making the film. “It’s tough to re-create the White House when you have a level of destruction.” He added added it was difficult to build a lot of things, the toughest being the White House to scale, and put the actors in the situations. The helmer also said that while there are already a few standing White House sets that are used in films and on television, he couldn’t use them. “We blew ours up, so they wouldn’t let us use those,” Fuqua said with a laugh.

McDermott, who played one of the terrorists, Forbes, added that he thought the director created a realistic-looking White House in the middle of Shreveport. “But I believed every second of it when I saw the movie. I was like, wow, this feels like Washington,” he said.

Speaking of other complications while filming, Fuqua said the heat of Shreveport was the toughest aspect to contend with on the set. He mentioned that it was around 115 to 120 degrees while shooting the battle scene, so “obviously we had a few people, including some extras and crew members, pass out, because it was too hot running and gunning.” He added a few crew members also passed out while building the White House in the heat.

Bassett added that her scenes were shot in Shreveport, and she also experienced the heat. But when she was watching the film, “it looked cold! I asked, how did they make it look cold?” She said it was over 100 degrees everyday, “but they made it winter with movie magic.” The actress added it was freezing in the studio. “Forget going to the trailer, I’ll just stay in here and be cool,” Bassett said of staying in the studio between her scenes.

McDermott also commented on the weather during filming, saying Shreveport in the summer is really hot. The actor was in Louisiana for six months last year, filming both ‘Olympus Has Fallen’ and ‘The Campaign.’ He added the high temperature at times hindered how the cast and crew could film both movies.

McDermott also offered praise for Fuqua, saying the director allowed him to build Forbes’ backstory by improving a lot on the set. “The whole speech about globalization, I made up. So I felt I was able to fill in a lot of what wasn’t in the script. Antoine let me go, and that was the best part about working with him,” the actor said. He added he liked the ability to bring things to the table.

“Antoine is one of those rare directors,” McDermott also said. He added that he really enjoyed working with the helmer. “He really keeps the spontaneity alive, and a rawness and credibility, especially in action. His energy is really built for action,” the actor said.

McDermott added that he spoke to the helmer about his Academy Award winning crime drama film, ‘Training Day,’ and what it was like for him to work with Denzel Washington. “That’s why I wanted to improv, because Denzel would improv a lot during his performance in that movie,” the actor said, adding that he thought Washington was given a great role.

Bassett also praised Fuqua’s work ethic, saying he was absolutely prepared. “He was just tenacious in his preparation and his understanding of that world. So on the set, he was calm and in control,” she said. The actress added that you would never know if the director ran out of time, since he was so in control. But “if you want another take, he’s always there for you. If you have a question of where are we, because there’s so many moving parts, he’s there for you.” Bassett also said that Fuqua provides a sense of security, and she looks forward to working with him again.

Yune, who played the terrorist Kang, also praised Fuqua, saying “With a director like Antoine, you don’t see this, but he understands risk. He understands risks, having grown up in one of the most dangerous neighborhoods in Pittsburgh.” The actor added that they needed the helmer’s realism in this type of movie, “or it could go in an entirely different direction.”

When the script was changing, Yune asked Fuqua where they should take the story. The director told the actor to forget the script, and they would find the right path together. Yune added that he was pleased with Fuqua’s end product.

The actors also praised Butler’s performance and expressed their happiness with working with their lead co-star. Bassett said “it was fortunate that on the first day of the shoot was the scene that he and I had in the coffee shop, so that was a great introduction. It was one of the early scenes, so we were able to establish a rapport,” she said.

Yune said Fuqua liked the physical contact between the two actors, and tried to instigate more fighting. “Even when everyone was trying to break for lunch, he would say, let’s keep fighting! He said, this isn’t a movie, this is Sparta! So that was a good thing about this,” Yune said.

Despite some of the physical challenges of filming ‘Olympus Has Fallen,’ including shooting in the extreme heat of Shreveport in the summer and building a replica of the White House in the city, the filmmaker created a shocking portrayal of an enemy destroying the symbol of Americans’ freedoms. But through Fuqua’s extensive research into whether or not the White House could be penetrated by foreign terrorists, his willingness to allow the actors to improv and help develop their characters and the actors’ close working relationships, the film offers a stunning insight into the vulnerability of politicians, both in their professional and personal lives. 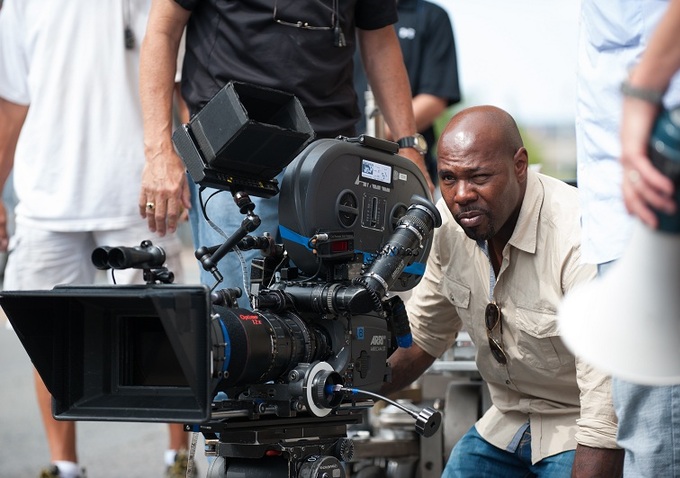