Title: Come Out and Play

There’s a unique, chilly vibe that hangs over “Come Out and Play,” an unnerving, humid slice of elemental horror that definitely has nothing to do with the old song of the same name by the Offspring. Summoning up disparate recollections of George Romero, “Children of the Corn” and even, fleetingly, Michelangelo Antonioni’s “The Passenger,” this artful genre entry works the mind like a punching bag before finally playing a hand that, narratively, isn’t as much of a winner. The odd story behind this film (dedicated to the martyrs of Stalingrad!) and its singularly named anonymous director, Makinov, may sound (and ultimately be) worthy of a movie itself, but shouldn’t totally overshadow the things about “Come Out and Play” that work.

During a romantic getaway to Mexico, Francis (Ebon Moss-Bachrach) insists on taking his pregnant wife Beth (Vinessa Shaw) to a more serene locale. So they rent a boat and head toward what they believe to be a charming little island. Once there, however, an atmosphere of unease sets in — the restaurant and hotel they find are abandoned, and the duo feel they’re being watched. Smiling and giggling kids pop up here and there, but no adults. And those kids aren’t innocent, it turns out — they’re murderous. A fight for survival ensues, as Francis tries to get Beth safely off the island.

The Russian-born Makinov, who wore a variety of masks during filming in order to protect his anonymity, updates Juan José Plan’s 1976 Spanish film “El Juego De Niños,” and its attendant source material, with an eye and mind toward austere travelogue realism. (“And Soon the Darkness” and Melissa George’s overlooked 2010 film “Triangle” are other vaguely similar mood pieces, though the latter less for its doom-loop plot than simply its equally spare setting.) The location settings ooze authenticity, and yet in this openness he even manages to locate some claustrophobia, with over-the-shoulder hallway tracking shots and a panicked auto escape. With a score that drifts into Moog and theremin, and conjures up the distorted low hum of a bi-plane, Makinov succeeds in creating a mood of looming dread.

A little of this goes a long way, though, and “Come Out and Play” kind of plateaus once Francis and Beth figure out the depths of danger these spooky, silent kids represent. The narrative is almost by definition painted into a corner that requires the introduction of awkward exposition, but the manner in which this is handled — once the pair meet another adult who’s survived a night of brutal attacks — is rather deflating. Even in streamlined form, this tale loses its grip. Still, the ominous effectiveness of its set-up and middle portion beckons, heralding the possible arrival of a bizarre new international talent in the thriller-suspense genre — one whose skill with the language of fear supersedes the need to speak English.

NOTE: In addition to its theatrical engagements, “Come Out and Play” is also available on cable VOD platforms. 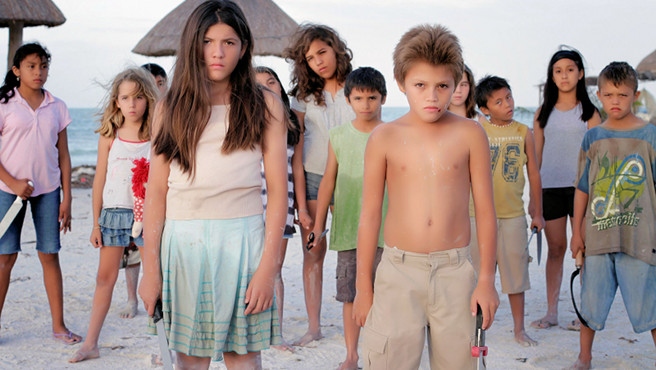