With a healthy list of credits spanning studio fare (“Mona Lisa Smile,” “Stealth”), television (“Damages,” HBO’s “John Adams”) and the independent arena (“Breaking Upwards,” “Higher Ground,” “Lola Versus”), Ebon Moss-Bachrach is a quintessential talented character actor — able to swing effortlessly and, more importantly, believably from genre to genre. In the unusual new horror film “Come Out and Play,” alongside Vinessa Shaw, he plays one half of a happy couple who go to Mexico for a romantic getaway, and end up stranded on an island full of murderous children.

It’s based on Juan José Plan’s 1976 Spanish film “El Juego De Niños,” but the parallel story of the movie’s production may be just as strange as “Come Out and Play,” since it’s directed by Makinov, an anonymous, foreign-born filmmaker who wears a bunch of masks to “enforce a personal vision of cinema that detaches itself from the ego-driven model of the director,” according to his biography. For ShockYa, Brent Simon recently had a chance to speak to Moss-Bachrach one-on-one by phone, about the actor’s unusual experiences with the, ahem, quirky Makinov, and how the latter prefers his tequila. The conversation is excerpted below:

ShockYa: “Come Out and Play” takes what could be an outlandish concept and roots it in this eerie, stripped-down world. Watching it, I felt like I’d tripped into this weird mixture of “Children of the Corn,” George Romero and “The Passenger.” How was it first presented to you?

Ebon Moss-Bachrach: First I read the script, and I said I have to see this movie (upon which it was based) because this is just too out there. I wanted to see if it could actually even be made into a movie. So I watched the original, which I wasn’t crazy about. But the general idea of the story I was interested in. I felt like the acting was fake and the look of the movie was kind of fake, but I was interested in trying to make a more authentic version of it.

ShockYa: Since Juan José Plan’s film was also based on a book, did you have any conversations about that other material and what specifically you wanted to avoid? Was the creative process shaped in contrast to the other material, in other words?

EMB: I went down to Mexico to meet with the producer and the director. And I don’t know if you know anything about the director, but he’s a real eccentric kind of guy —

ShockYa: I read about him wearing a mask, so I was trying to avoid asking about him for as long as possible, figuring we’d get around to it. [laughs]

EMB: Well, to be honest I wouldn’t be able to recognize him. I know his general physique, but I don’t know what his face is like or anything. He doesn’t speak any English, he speaks Russian. And my Russian is pretty good, so I got a little more familiar with him than maybe some of the other actors did, or some of the producers, who I understand had a very hard time with him ultimately. But as an actor, you kind of sign up for the director’s vision — you say, “OK, do I trust this person or not, do I care if I don’t trust them?” And I was intrigued. I said, “OK, this guy’s got some kind of vision!” [laughs] And it’s a one-month shoot, I’m not signing up for a year. So I decided to roll the dice. And I have a lot of affection for Makinov, as crazy as he is.

ShockYa: I admit I’m fascinated by this because it seems like a weirdly showy way to call attention to one’s anonymity. I first read about it with regards to some public presentation of the movie, but he wore a mask during the entirety of filming?

EMB: Oh yeah, different masks. I mean, he had a whole collection of, like, Dia de los Muertos masks. I mean, he picked them up at a flea market in Campeche or something. Sometimes it was just a bag (over his head). Once he directed from a refrigerator box, and was just in there all day. [laughs] He has bizarre, bizarre eating habits — like, all he ate was things in stick form, like little carrot and celery sticks, or beef jerky, or churros. I mean, the guy’s a total nut. And part of the reason he likes the things in stick shape, I guess, is that it can fit through the small holes in his marks — the same reason he drinks through a straw. Once he had a monkey mask on. Umm, so I don’t know what he looks like. He’s from Belarus, which is a pretty closed country. “Twin Peaks” was very big in the Soviet Union, he said, and he saw that and a very early silent version of “Fantômas,” about a super criminal-type character. According to him, the silent version from 1911 was the only movie he saw until he was 17 years old. [laughs] So, he’s a weirdo.

ShockYa: So you’re sure this isn’t just all an elaborate ruse by Terrence Malick, right?

EMB: [laughs] Oh man, I’m not, I’m not. If you want to believe that, absolutely, let’s start that rumor.

ShockYa: You mentioned the producers had problems with him. Were they friendly at all with him prior to this, or were their problems related to this guise?

EMB: There were a lot of problems in post-production, simply because he won’t go to Los Angeles and that’s where they were cutting the movie. I think he was in Moldovia or something, and with the time difference the editor had to be up at weird hours. So it took longer than normal because of that, but then also sometimes he’ll use email, sometimes he won’t — sometimes he likes to correspond only through longhand written letters. …I can’t imagine a more difficult person to work with. I think he can understand English, but he refuses to speak it. So he has a translator, an old Russian woman who might have been his aunt or someone for all I know.

ShockYa: Film is an international language… and I’ve talked before with actors about working with [directors who speak little or no English]. But when you have not only the language barrier but also this unusual scrim between actors and directors, did that make the process extraordinarily difficult for you? And how much did Makinov really coach or tweak the performances?

EMB: I think he’s probably from the school that casting is 90 percent of what you’re going to do with the actors — an old school, John Huston-type philosophy. So he didn’t work with us too much. I went out a couple nights and drank with him and I found him pretty intriguing. My Russian is OK, because my wife is Ukranian, so I could get around the language a bit. In fact, other than the translator I think I was probably the only one on set who knew any Russian at all, so that gave me a certain value in his estimation, maybe. He was very civil — he was never aggressive or anything to Vinessa and I. But I don’t think that’s true toward the producers. I think he’s an angry guy. …I don’t think this is his first movie, but I do think it’s the first one that’s had any sort of international availability. And if I’m not mistaken, his training is all dance. He was a choreographer. I saw some YouTube clips, which were of these very severe Japanese style of dance that came out of World War II that was a response to the (atomic) bomb, where they move incredibly slowly. I know that was sort of his training, and he was creating these pieces somewhere in Siberia or something.

ShockYa: So even when you went out drinking he still wore his mask but just had these regular conversations about his background and stuff?

EMB: I wouldn’t say regular conversations. [laughs] I mean, he was talking about staging these elaborate performance pieces with no one there. And then he has his mask on, and is drinking tequila through a straw. [laughs] But it was a conversation.

ShockYa: [laughs] I’m sure you’ve had many great professional experiences and will have many more, but that story is something that no one can ever take away from you.

EMB: Yeah, that was one of the big reasons to do the movie — to take a ticket and go on this ride.

ShockYa: I’ve talked with actors and actresses about shifts in mood related to characters they played around the time they became parents. Given the intense subject matter of this film, and being a father yourself, did you return home with any uneasiness after shooting?

EMB: Well, my family was there for a bit during shooting, actually. That was probably a mistake — not that I came back to the hotel like a homicidal maniac or anything, but it was hard. I have two daughters [and] there was a distance from them. We filmed on an island not far from Cuba, where the Caribbean and the Gulf of Mexico meet, and in a town called Campeche. They were down there about 10 days. But I think having kids… well, maybe I didn’t take the circumstances as lightly as I might have a few years ago before I had kids.

ShockYa: What was Vinessa’s experience like with first meeting Makinov, did you get a chance to ask her?

EMB: I don’t know if she did (before filming). I think maybe they had a conversation on the phone, though I’m not really sure how that worked with the translator. I didn’t really have a chance to meet her until the night before we started shooting, which is really often the case on these smaller movies. I’d seen her movies, though, including James Grey’s “Two Lovers,” which is just one of my favorite movies. She’s great.

ShockYa: Nick from “Lola Versus” was one of the more indelible supporting characters of last year, but what do most people tend to recognize you from?

EMB: I’m a character actor and have been in all sorts of stuff, so it’s usually like (enthusiastically), “Hey man, how’s it going?” And then I’m like, “I don’t think we’ve ever met, actually.” If something I did happens to be on TV the night before, then I might get that. I’m not as anonymous as Makinov, but I usually don’t get stopped that much. 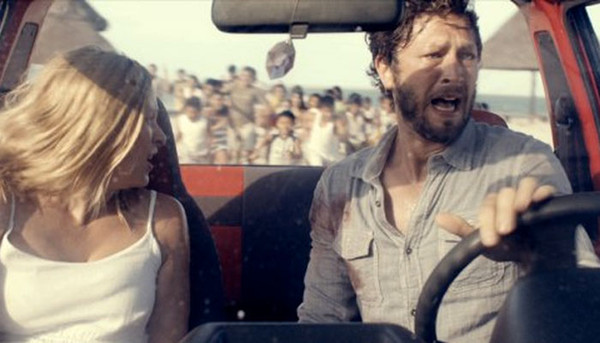