The author of “The Twilight Saga” and the director of “Gattaca” just had a baby – an unintentionally laughable, nonsensical, ugly baby.

“The Host” takes place in a future time when an alien race called the Souls invade Earth. Rather than blow up the White House or zap people with lasers, the Souls take over human bodies and use them to turn the planet back into a clean, safe place. They may have good intentions, but clearly claiming bodies without human consent doesn’t fly and the few that manage to escape the colonization form a resistance.

Melanie Stryder (Saoirse Ronan) is part of that resistance until she’s captured by a Seeker (Diane Kruger) and fitted with her very own Soul, Wanderer. Wanderer assumes control, but Melanie isn’t about to give up that easily and while Wanderer tries to obey the Seeker and use Melanie’s memories to track down the remainder of the resistance, those memories and Melanie’s powers of persuasion make Wanderer doubt the Soul’s cause. Using their shared body, the two team up to find Melanie’s little brother, Jamie (Chandler Canterbury), and boyfriend, Jared (Max Irons), and do what they can to keep as many people and Souls alive.

“The Host” is in big trouble from the moment it opens and while it’s not directly the trailer’s fault, that trailer does highlight the problem; the film’s narrative has zero structure. Whereas the trailer introduces the audience to human Melanie before showing her becoming buddy-buddy with Wanderer, the film opens with that window-smashing chase sequence. Before we even get the chance to know, understand, and like Melanie, she’s already someone else.

Writer-director Andrew Niccol does make attempts at delivering backstory for both Melanie and Wanderer post-possession, but by that point, we’ve already got Wanderer walking around with Melanie in her head, literally talking to her via voiceover, and no amount of melodramatic flashbacks can sell that. Perhaps the whole Wanderer/Melanie relationship worked in book form, but on screen, it’s just downright silly. Again, it could have been more successful had Niccol established Melanie as an individual before we’re expected to absorb and believe all of this sci-fi nonsense, but by skipping a sensible meet and greet, it’s just impossible to appropriately convey the more fantastical elements of the story.

Then again, even had the first act of the film been properly structured, “The Host” would have descended into absurdity eventually because the entirety of the film suffers from unintentional laughs via shoddy visuals, cookie cutter characters, and a number of wholly unbelievable performances. There are some niftier elements of production design, but the large majority of “The Host” looks noticeably cheap. Rather than show expansive views of the alien compound, we’re quarantined to single rooms at a time and never experience anything with more than roughly seven Souls. If we’re really meant to believe the Souls have good intentions and could be changing Earth for the better; let us see it. What’s daily life like for the Seeker when she’s not tracking down human rebels? What do Soul-occupied humans do on a daily basis? Do they just continue living that person’s life, but in a happier fashion? The lack of telling visuals is even worse on the human side. The resistance hideout feels like a film set. The texture of the walls is noticeably off and the layout of the cave system isn’t fully realized. We’re brought to very specific areas that we’re instructed to remember, but are never given a sense of how they all connect.

And the fact that the Seeker can’t find this cave system with massive mirrors constantly reflecting sunlight out of a clearing is just downright ridiculous. Yes, the humans tuck those mirrors away when they hear a helicopter rumble, but then how about the trucks that roll in and out of the seemingly barren section of the desert? Or what about the picture the Seeker has of the exact location of the cave? There’s nothing wrong with some suspension of disbelief every now and then, but you’ve got to earn it. “The Host” deliberately positions so many major events and realizations that you can’t help, but to feel jerked around and, in turn, far less receptive to the narrative and character.

Then there are the performance issues. Poor, Saoirse Ronan. What was she thinking? It’s somewhat upsetting watching such a talented actress talking to herself and trying to breathe life into such silly material. There is the possibility that the filmmakers didn’t realize this until it was too late, but the Melanie voice over just doesn’t work at all. Ronan has some nice moments and does manage to establish Wanderer as a person (per se), but Melanie’s dialogue is so tacky that that portion of her character just doesn’t stand a chance. Wanderer is sacrificing her life to save Melanie and her loved ones whereas Melanie isn’t really doing much at all. In fact, she comes across as a bit of a snarky brat.

And if you’ve had a tough time with the supernatural romances in “Twilight,” you better brace yourself for “The Host.” This very well may be the most absurd supernatural romance in young adult book-to-film history. The idea of Melanie and Wanderer sharing the same body while Melanie loves Jared and Wanderer falls for Jake Abel’s Ian is painfully senseless. Not only is the stigma that comes with being the leading lady caught in a YA love triangle, or perhaps in this case a love square, blindingly bright, but the whole scenario is made even more ludicrous by that voiceover.

That voiceover is the key to selling “The Host” and it’s just a total failure from start to finish. Ronan tries, but between the lack of timely character development and the fact that there’s just too much of Melanie’s blathering, there’s no hope whatsoever. The editor for this baby certainly had his hands full and either just didn’t know what to do with what he’d been given or received poor direction. Either way, “The Host” is overloaded with ill-timed voiceover, unexceptional and incomplete action sequences, cutting that makes performances feel even more stilted than they already are, and a feature with zero plot structure.

If only they had just left it at the trailer. 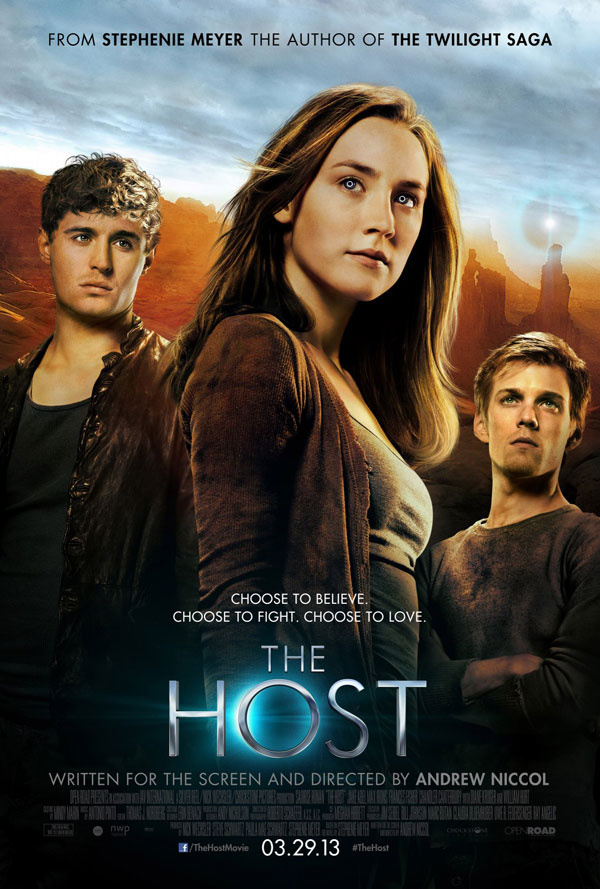