A couple attractive Aussies whose respective stars are on the upswing, Teresa Palmer and Liam Hemsworth, try to help anchor “Love & Honor,” a well meaning but essentially dopey period piece flick that tries with increasingly diminishing effectiveness to meld an anti-war message with Nicholas Sparks-type romance.

“Love & Honor” unfolds over the course of a week in July of 1969. When soldier Dalton (Austin Stowell) gets dumped by mail by his hometown girlfriend Jane (Aimee Teegarden), he uses a one-week break from the Vietnam War, during which he’s supposed to be decompressing in Hong Kong, to sneak back home to the United States in an effort to win her back. Always up for an adventure, his randy buddy Mickey (Hemsworth) decides to join him, figuring there are more people to which he can probably show his abs. The AWOL duo arrive at University of Michigan, where Dalton discovers that the hippified Jane now goes by “Juniper,” and is waist-deep in the burgeoning counter-culture movement, along with her friends and fellow students Candace (Palmer) and Pete (Chris Lowell), a pair of aspiring journalists.

Jim Burnstein and Garrett Schiff’s script is a functional, kind of soapy thing, and not particularly convincing in its mooring of time and place. In fact, owing to certain overreaches by director Danny Mooney, the entire endeavor gives off a feeling of high school dinner theater dress-up. Young Palmer is incandescent, but Hemsworth, while rakish and charming, has a certain pin-up vibe which doesn’t jibe with the movie’s period piece setting. It’s fine to tell a soldier’s story that isn’t particularly gritty and psychologically punishing (“Love & Honor” is rated PG-13), but there’s nothing about the explorations of cultural clash and attitudinal shifts here that ring loud and true. 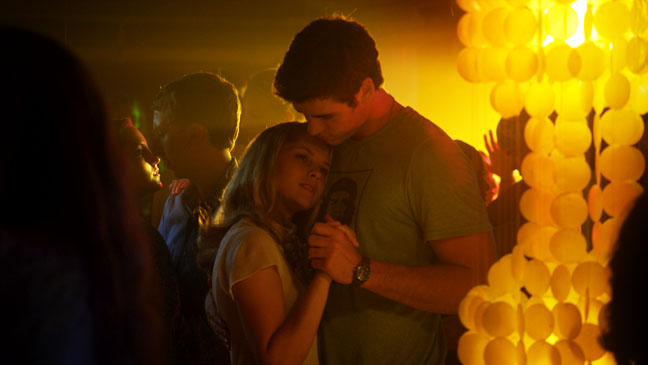