A sixteen-year-old student in one of my high school English classes—call him Robert—had a vivid imagination. I declared him a Walter Mitty from the stories he would tell me about himself. The kicker is that he insisted the stories were true. He was of Puerto Rican heritage but spoke of visiting his Romanian grandfather in Bucharest. He was pudgy, even nerdy-looking, but spoke of his weekend skydiving with his uncle. Though he was adept at computers, even tutoring others, I figured that he could be a novelist, but wonder at the same time whether his fabrications could be damaging to him, perhaps preventing him from accommodating reality.

François Ozon’s “In the House,” by the noted director of such gems as “Potiche” (a husband is taken hostage in a factory, his trophy wife taking the reins of the business) and “Swimming Pool” (touchy dynamics between a British mystery author and the daughter of his publisher), is about such a young man. The story conjures memories of Woody Allen’s “Deconstructing Harry,” a cynical movie about the dangers of using real characters for novels and Luigi Pinadello’s play, “Six Characters in Search of an Author,” about six people claiming to be part of an unfinished story, asking the writer to complete the job.

Superbly highlighting the interactions between sixteen-year-old Claude (played by 22-year-old Ernst Unhauer) and his teacher Germain (Fabrice Luchini), “In the House” not only asks the audience to cast judgments on the young writer, whose essays involve real people but with actions that are either true or made up, but to judge the teacher as well for encouraging the lad but presumably going too far in his efforts to nurture the kid’s talent. Ultimately we’re looking principally at the teacher, carrying on a fairly dull life with his wife Jeanne (Kristin Scott-Thomas) and seeking vicarious thrills by following a series of compositions by Claude that hone in on the private lives of another family.

We in the audience may guess which of the scenes are real, though the veracity is not really important. Germain reads the essays to his wife, but generally Ozon shows rather than simply tells us of the goings-on in the family of Claude’s best friend, Rapha (Bastien Ughetto) by having them act out the essays. We learn quite a bit about family dynamics in the teacher’s home, where Jeanne’s job involves running a failing avant-garde gallery; in the house of the best friend, where mother Esther (Emmanuelle Seigner) and her flamboyant husband Denis (Rapha Artole père) are running into problems of communication and whose middle-class life-style is threatened.

“In the House” is in part a comedy of manners, as we note how often Claude parodies the bourgeois aspirations of Esther, whose reproductions of Klee are said to be beyond her ability to comprehend. The movie is also a clever, cynical comedy about frustrated lives. Claude’s parents had split up, the boy’s lack of a stable home supplying him the impetus of eavesdropping on the lives of his pal’s parents. Germain considers his latest sophomore English class the worst ever, giving him impetus to encourage the one potential writer in the group. Jeanne is downbeat, about to lose her job in the art gallery. Ralpha Artole père has a deal cooked up that’s about to go belly-up and his wife Esther is ready to carry on an affair with a sixeen-year-old, or so the latter says.

“In the House” won Best Screenplay as the jury prize at the 2012 San Sebastian Film Festival. 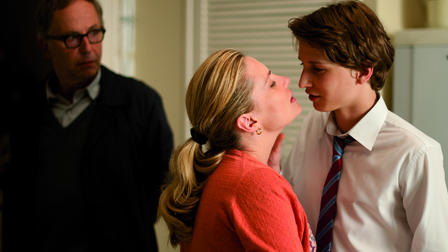