Not “deemed” as an electronic music fan, I have become more appreciative of the transcending genre largely due to the complexity of its instrumentals and the intensity of its visual effects. Yes, there are times I prefer to wallow away in melancholic melodies, but lately turning on dance anthems have become my mood booster. So, say goodbye to spring fever by channeling your energy into the music from alternative electro group, Five Knives.

The Nashville-based outfit recently released the music video for the single, “Messin’ With My Mind“, which is off of their EP, “The Rising”. It is extremely refreshing to watch this positively chaotic music video, especially when MTV and VH1 are constantly airing Taylor Swift love-themed stories. Five Knives’ lead singer, Anna Worstell, is frantically at the forefront of the video with her contorting movements. While Swift cares way too much, Worstell doesn’t give a damn, which proves to be effortlessly captivating. I am fully aware of the vagueness of this next statement, but after watching the video one time through, the meaning will become jarringly obvious. The instrumentals of the single are “pure crack”. “Messin With My Mind” and the four other tracks off of “The Rising” would have been ideal for the “Spring Breakers” soundtrack.

You can get a free download of “Messin’ With My Mind” by heading over to the band’s official site. “The Rising” is now available on iTunes.

Five Knives will be on the road this summer on the 19th annual Vans Warped Tour and will be releasing their debut full-length via Red Bull Records. For a complete list of dates and to stay tuned to all things Five Knives, visit the band’s Facebook Page. 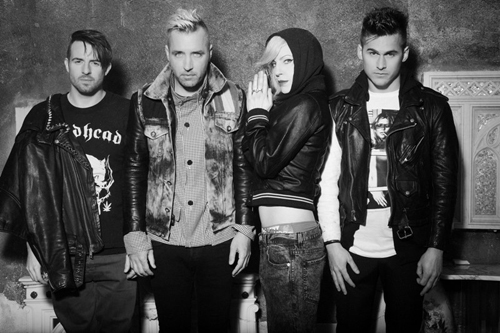